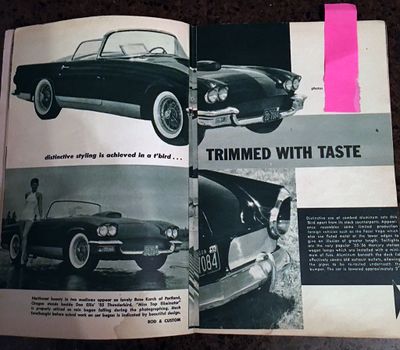 Ellis' Thunderbird was featured in Rod & Custom June 1959. The story was named "Trimmed with taste," and the author of the story compared the appearance of the car with the appearance of a limited production vehicle such as the Facel Vega. Photo courtesy of Dennis Bradford. 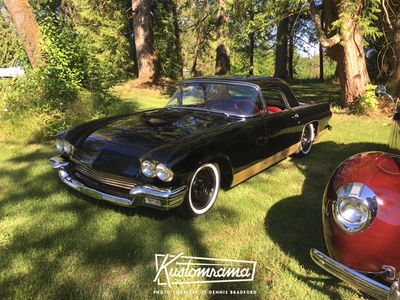 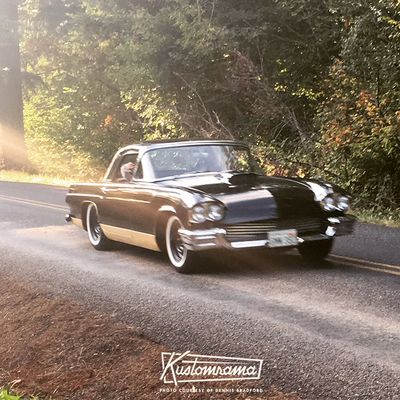 1955 Ford Thunderbird owned by Don Ellis of Portland, Oregon. Ellis was a member of the Ramblers of Portland car club, and the Thunderbird was restyled by several of the guys in the club.[1]

An urge for speed

The build was started late in 1958 and completed early in 1959. A contemporary look was achieved by splitting and expanding the fenders to fit headlight doors from a 1958 Chevrolet. Quad headlights became legal in all states of the US in 1958, and it was one of the hottest custom trends of the year. The hood bubble was enlarged to accommodate various engine goodies before it was dressed up with wire mesh to match the grille. Ellis then reworked the area around the nose to fit the new grille and a 1957 Ford Thunderbird bumper. Combed aluminum was added to the lower edge of the body in order to give an illusion of greater length. It was also added behind the cockpit, turning the space into a package tray when a top was fitted. The rear of the car featured 1955 - 1956 Mercury station wagon taillights that Don had grafted on to the quarter panels. The exhaust was routed underneath the bumper, and aluminum was installed under the deck lid to cover the old exhaust outlets. The car was lowered approximately 3".[3]

Street and strip - An engine for every occasion

Ellis had two engines for the car, depending on the season. A 1957 Ford Thunderbird engine was used on the street, while a fully loaded 1956 Cadillac engine was installed for use on the strip.[3]

In 1959 Ellis' Thunderbird was featured in Rod & Custom June 1959. The story was named "Trimmed with taste," and the author of the story compared the appearance of the car with the appearance of a limited production vehicle such as the Facel Vega.[3]

In 2018 Dennis Bradford of Washougal, Washington bought the car from a fellow named Del. Del who lived in Vancouver, Washington, Washington first bought the old custom in 1981 when it got traded in on a new car. He then sold it, and bought it back in early 2018. When Dennis bought the old custom from Del, he was told that the car was shown locally till 1962; "It has stayed in the northwest its whole life, and as far as I know the guys who built it are all dead." Dennis is currently looking for more info and photos of the old custom, so please get in touch with us at mail@kustomrama.com if you have any more info and photos to share of this tasteful custom.

Please get in touch with us at mail@kustomrama.com if you have additional information or photos to share about Don Ellis' 1955 Ford.