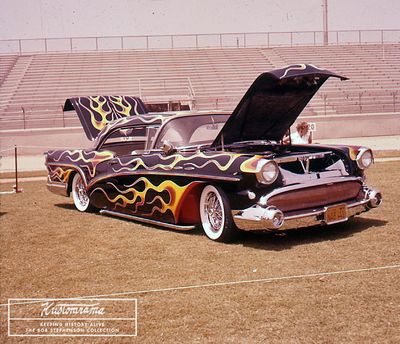 A photo of Jack's Buick from the 1957 Norwalk Motorcade at Excelsior High School in Norwalk, California. Photo from The Bob Stephenson Photo Collection. 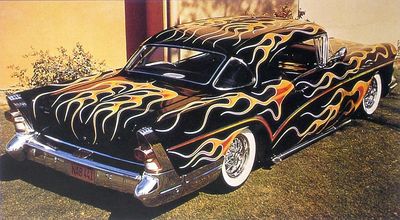 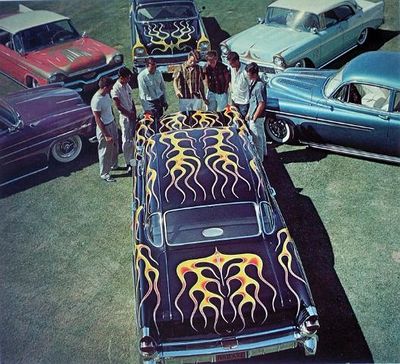 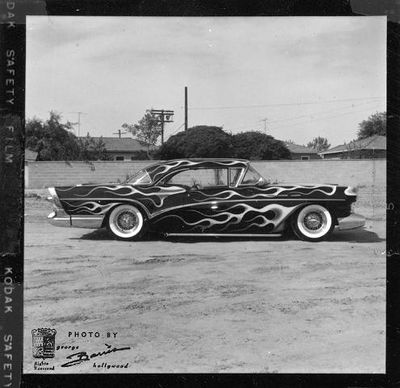 Photo by George Barris. From www.barriskustomcity.com[1]

1957 Buick Special painted by Larry Watson of Watson's House of Style for Jack James of Norwalk, California. Bob O'Leary, a local Buick dealership owner from Downey, California used the car for advertising. The car was original white and was painted black, a set of Skylark wire wheels were added. The agency performed a number of engine modifications and added a lot of chrome accessories to it, such as dual Appleton spotlights and chrome window moldings. The the body was nosed and decked, and the grille, taillights and dashboard were copper-plated. The car was lowered 5 inches all around and the interior was factory pleated black and white.[2] Jack pulled up in Larry's driveway with his brand new 1957 Buick and wanted the whole car painted with flames. He wanted the traditional red orange yellow tip flames. Larry suggested he would make the flames go down the hood, go over the fenders and go right down to the bottom of the chrome strip. "No no, I wan't the whole son of a bitch flamed", Jack replied. Larry asked him if he could try something different, he did not want to do the crabclaw. That was all right with Jack, he wanted the whole car flamed, "do what ever you want".[3] This was one of the only flame jobs Larry did in enamel, he sanded the layers of red, orange and yellow to achieve a faded or "blended" look to the flames.[2] Larry used 20 rolls of masking tape and only one day to paint the car. This was his first radical flame job. After painting the flames, they were pinstriped in white. Larry's brother Dave and Calvin Wiekamp helped paint the car. The flame job costed Jack $100 in 1957. Larry was so proud of the results that he drove down to Barris Kustoms to show George Barris his newest creation. He pulled up in the alley and the whole crew went outside to check out the Buick.[3]

Please get in touch with us at mail@kustomrama.com if you have additional information or photos to share about Jack James' 1957 Buick.