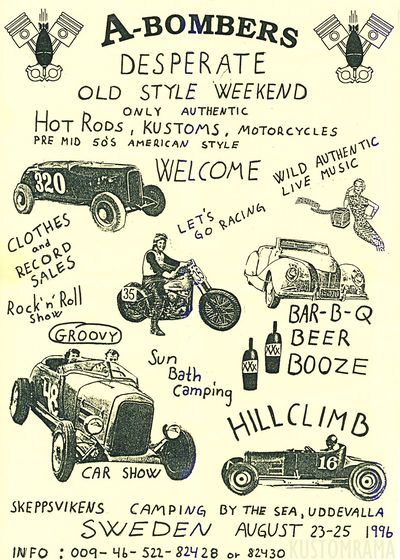 The flyer for the first A-Bombers Desperate Old Style Weekend in 1996. Scan courtesy of Per Graemer. 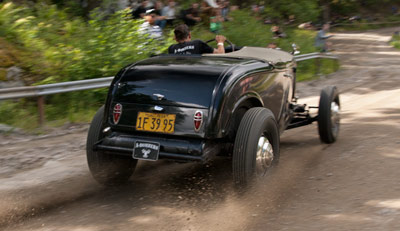 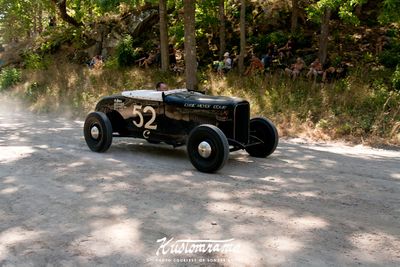 Kent Vikmo on his way up Devils Peak with his lakester-styled Model A roadster during the 2018 A-Bombers Old Style Weekend. Photo by Sondre Kvipt - Kustomrama. 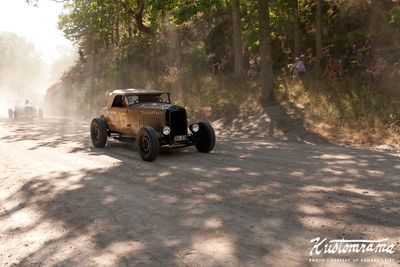 Rolf Bäckevik's 1931 Ford Model A roadster on the way up Devils Peak during the 2018 A-Bombers Old Style Weekend. Photo by Sondre Kvipt - Kustomrama. 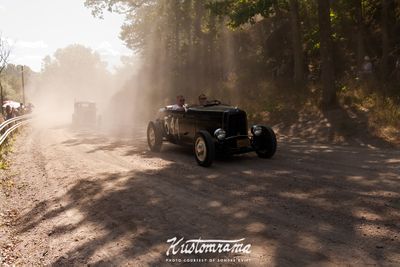 Erik Jostad's 1932 Ford Roadster on the way up Devils Peak before the race at the 2018 A-Bombers Old Style Weekend. Photo by Sondre Kvipt - Kustomrama.

The A-Bombers is a Swedish hot rod and motorcycle club founded in 1993.

The club was founded by Nicklas "Camtwister" Henriksson and Kent "Jack Baymoore" Vikmo. Back then, Nicklas was building and driving a 1929 Ford Model A roadster, while Kent was driving a Harley Davidson ‘46 Knucklehead. They were both fascinated by the American post-WW II styling of motorcycles and hot rods and also liked the style of clubs that came out of this era. Motorcycle Clubs like Boozefighters and Red Rambler Motorcycle Club alongside the Californian hot rod clubs. They really liked the “home-coming bomber-tailgunner” kinda style. J.B. had an “old style” racing sweater made for him. White with black arms, just like in those old pics, with Harley-Davidson on the chest and their new logo with the new-named club, A-BOMBERS, on the back. C.H. also made some cool tight t-shirts with the A-BOMBERS logo on the back. This is when the first rumbles started to echoe from the exhaustpipes of an A-Bombers member.

The name A-BOMBERS came from the word A-BOMB which of course meant Atomic Bomb, but the main reason these guys chose it was in the meaning of a highly tuned old car; a HOT ROD ! Which you can call the old Harley-Davidson Texas strokers, as well...

A few years later they started to think of organizing a meeting for people that liked the same kind of style, music and vehicles. They also hooked up ol’ friend Uno, who loved the style and also had some nice sets of wheels.

Together they planned the first Old Style Weekend. It was supposed to be a small friendly gathering with a few people. On the Friday they’d just sit by the fire or sat by the beach, sipping Pina Coladas and on the Saturday there was a bigger party with about 60 people.

It may be important to know that the club has no “president” or anything like that. We are just friends with common interests and just like to have a good time, party and drive our cars and bikes.

Please get in touch with us at mail@kustomrama.com if you have additional information or photos to share about A-Bombers.