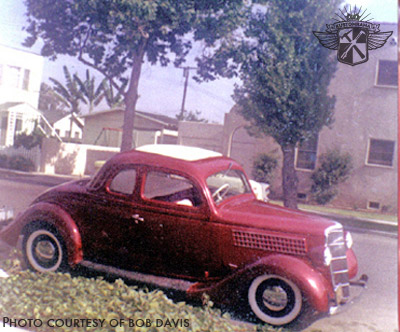 Bob's coupe as it looked when it was completed in 1960. Photo courtesy of Bob Davis. 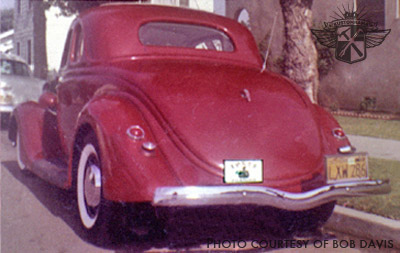 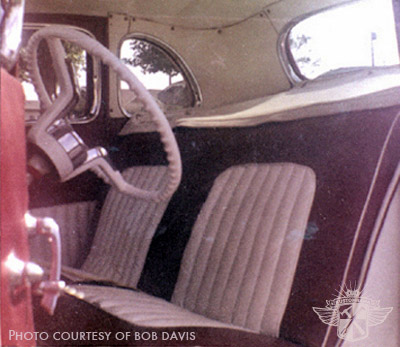 The upholstery and roof inset was done in Tijuana, Mexico, as the Tijuana upholstery was about 1/4 the price of the US upholstery, and the car would be done in one day. Photo courtesy of Bob Davis. 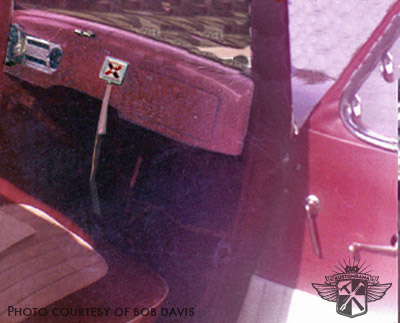 1935 Ford 5-Window Coupe owned by Lords of Wilmington member Bob Davis of Long Beach, California. Bob bought the coupe for $85 in 1960. At the time it barely ran, and it had dents and holes. The upholstery was also destroyed. He hired other people to do the bodywork, mechanics and other procedures. Bob's best friend Ray Dascenzo's dad, Richard Moser, did the brakes for fun and free. The stock taillights were swapped for a pair of 1949 Pontiac taillights. A brand new grille from Ford Parts Obsolete was bought and installed along with 1949 Mercury wheels and hubcaps. All appropriate parts plus the window frames were chromed. 1940 Lincoln Continental hydraulic brakes were installed along with a 3" dropped axle, giving the car a modern forward rake. At first, Bob had a 1948 Mercury engine installed in the car. This engine was later swapped for a more modern 1958 Chevrolet 283 engine. Bob and a fellow Lords of Wilmington member did the swap. The upholstery and roof inset was done in Tijuana, Mexico, as the Tijuana upholstery was about 1/4 the price of the US upholstery, and the car would be done in one day. The upholstery was done in red and white, matching the GM red color of the coupe. The interior did also feature a 1953 Chevrolet instrument cluster, a 1960 Pontiac steering wheel and a Lucky Lager Beer shift knob. Bob owned the car for four years, and sold it in 1964.[1]

Please get in touch with us at mail@kustomrama.com if you have additional information or photos to share about Bob Davis' 1935 Ford.