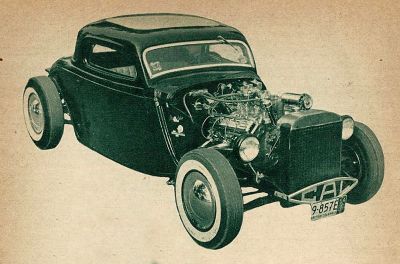 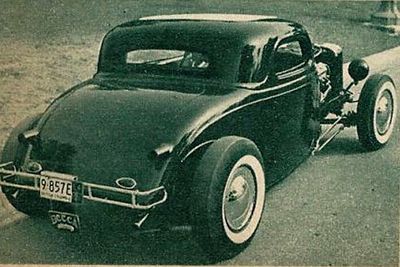 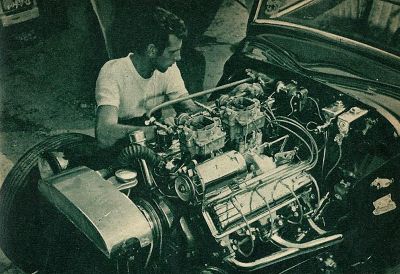 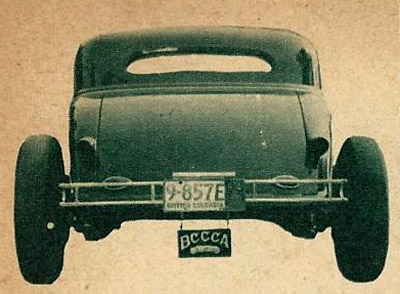 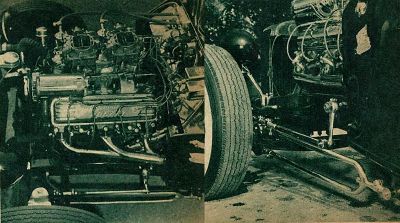 Cal's coupe at Western Speedway around 1957. Photo courtesy of the Century Toppers.

The Orange Crate version of the '34 at the 1963 Vancouver Pacific International Motorama. Photo courtesy of Canadian Rodder.

1934 Ford 3-Window Coupe owned and built by BCCCA member Cal Morrow of Vancouver, British Columbia, Canada. Cal wanted his hot rod to be both fast at the drag strip, but also suitable for cross-country driving. By 1955, 22 year-old Cal, who was a professional truck driver at the time was featured in Rod & Custom January 1955. The car took Cal 3 years to construct. The body was channeled 7 inches over the frame and the top was chopped 4 inches. By kicking the frame up in the rear and installing a dropped axle up front, the coupe was brought down much farther. Due to the low ground clearance, a 1940 Mercury rear end had to be installed. The door handles were removed and the deck lid was filled. 1939 Ford taillights were installed horizontally along with a set of Nerf bars. The front Nerf bar featured Cal's name. One interesting treatment on Cal's Coupe was the four exhaust outlets on the rear of the body. Actually, the two upper pipes were false, they were impractical because of the condensation in the pipes were dripping onto the black lacquer paint job. The problem was solved by installing an additional set beneath the car. Tubular wishbones were made from 1/2" chrome moly stock. Ends from Ford tie-rods enabled the owner to adjust the length of the rods. This feature provided adjustable camber for the front axle. The car was meant to be powerful but yet dependable at the same time, therefore a Oldsmobile power plant seemed as the natural choice. The engine was bored out to 313 cubic inches and fit with Speed-O-Motive pistons. Cal made a trip to Southern California, heading towards Bonneville, Cal's other purpose of the trip was to buy speed equipment for his car. Extra performance were added by installing a Weiand dual-quad manifold, mounting two Carter four-throat carburetors. Belond headers and a Mallory "Magspark" ignition finished up the basic engine modifications. While on his way to Bonneville, Cal stopped by Ed Iskenderian's shop to buy one of his cam kits for overhead valve V8's. When the car was featured in Rod & Custom January 1955, the 4 inch custom built radiator core was scheduled to be housed with an early-model Chrysler shell. The interior was stitched by Bandick of New Westminister, British Columbia, Canada in red and cream. The dashboard was fully fit with Stewart-Warner gauges.[1]

Darryl Foster bought the coupe an turned it into "the Orange Krate."[2] The Orange Krate version was shown at the 1963 Vancouver Pacific International Motorama.

Please get in touch with us at mail@kustomrama.com if you have additional information or photos to share about Cal Morrow's 1934 Ford.