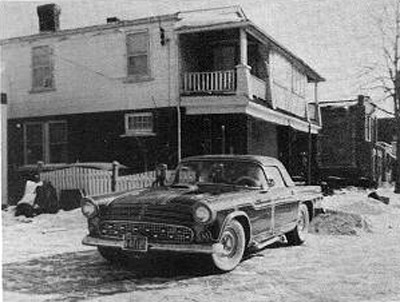 Choc's Thunderbird as it was presented in the souvenir pictorial from the 1960 Hartford Autorama.

1955 Ford Thunderbird convertible owned by Choc Hunt of Kitchener, Ontario, Canada. Choc's Thunderbird was shown at the 1960 Hartford Autorama, by then it featured a fully chromed engine. The undercarriage was chromed as well. It had recently been panel painted. Choc had one pleated top and one candy red plastic top for the car. It was custom upholstered, and rolled om mag wheels. According to the souvenir pictorial from the show, Choc's Thunderbird was Canada's most fabulous American modified sports car.[1]

Please get in touch with us at mail@kustomrama.com if you have additional information or photos to share about Choc Hunt's 1955 Ford.