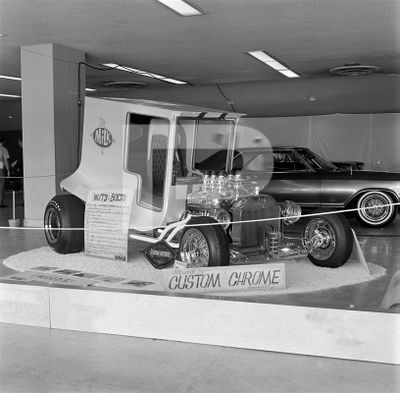 An early iteration of the Milk Truck as it appeared when it made its debut at the 1965 Tridents Rod Custom Autorama. Photo by Bud Lang, courtesy of the Petersen Archive. 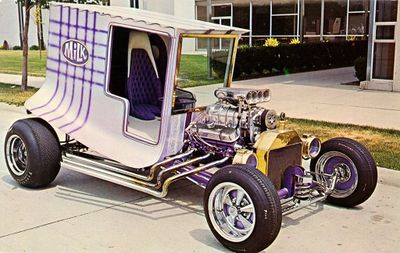 A second iteration of the Milk Truck. Sometime after the 1965 Tridents Rod Custom Autorama Larry Watson of Watson's House of Style redid the paint job on the car. In 2018 Dave Pearce told Sondre Kvipt of Kustomrama that Larry Watson was painting Dan's Milk Truck at the same time as he was painting his 1965 Chevrolet Impala; "He had just invented the spray rig that did the fogged grid pattern on the side of the truck." 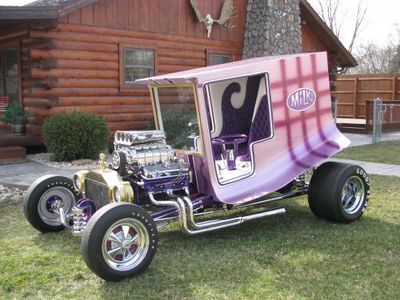 The Milk Truck as it appeared after Dave Shuten restored it back to its 1965 configuration. 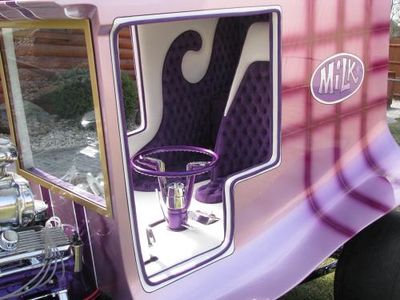 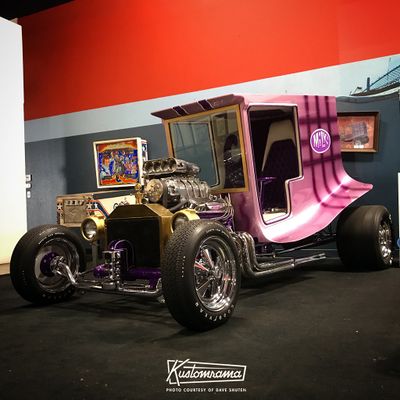 The "Milk Truck" is a Show Rod built by Dan Woods.

The Milk Truck was Dan's first show rod, and he was only eighteen years old when he debuted it at the 1965 Tridents Rod Custom Autorama at the L.A. Sports Arena. It went on to win the Grand Sweepstakes and other awards that weekend. Dan and the "Milk Truck" rolled on from there!

Sometime after the 1965 Tridents Rod Custom Autorama Larry Watson of Watson's House of Style redid the paint job on the car. In 2018 Dave Pearce told Sondre Kvipt of Kustomrama that Larry Watson was painting Dan's Milk Truck at the same time as he was painting his 1965 Chevrolet Impala; "He had just invented the spray rig that did the fogged grid pattern on the side of the truck."[1]

"Rod & Custom" put it on the cover of their August, 1965 issue with a detailed feature inside. They received such a reader response that they did a follow up issue in November of that year, entitled "How to Build Your Own Milk Truck Model".

There happened to be a guy named Ed Roth at the show. He was so taken with the "Milk Truck" that Dan went to work with Big Daddy at Roth Studios for the next decade. Building some of Ed's most famous show rods with him including the Road Agent, Druid Princess and more.

In 1967, Bob Reisner adopted the "Milk Truck". It went on to star in the 1967 Autorama Shows and makes the cover of their annual. In 1968, Bob turned it into a million-selling Eldon Model as part of his California Show Car Series. The "Milk Truck" would tour for a few more years winning too many awards to mention before it was retired.

A few years ago the "Milk Truck" was taken out of unmolested storage and restored by House of Colors Painter of the Year Dave Shutten. Retaining its 1957 Pontiac 347 with Isky cam, Holmes valve covers, and 6-71 Crager blower, all priceless vintage speed equipment, the "Milk Truck" was again one of the stars of the Detriot Autorama and reunited with Roth's Orbitron. Also featured and shown throughout the Dan Woods article in Rodders Journal #43, it was recently on the cover and centerfold of "Hot Rods Deluxe".

The "Milk Truck" will be celebrating its 45th year as Star Show Rod at Russo and Steele, Scottsdale 2010. It is a dazzling show stopper and crowd-pleaser and represents a fabulous addition to any collection or museum. Please note that it is sold on Bill of sale only, no title and hasn't been fired up since restoration, but is capable of running. [2]

Please get in touch with us at mail@kustomrama.com if you have additional information or photos to share about Dan Woods' Milk Truck.