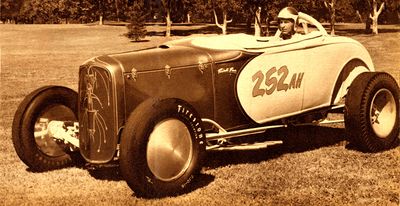 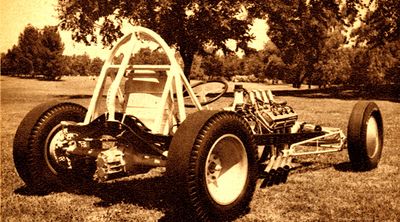 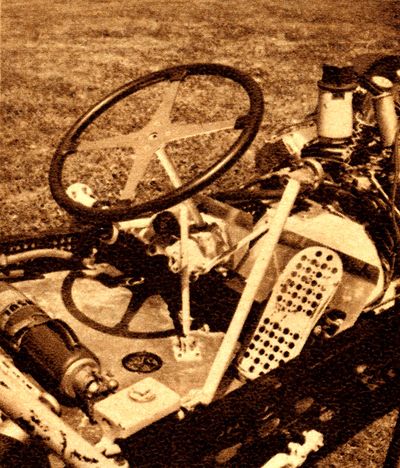 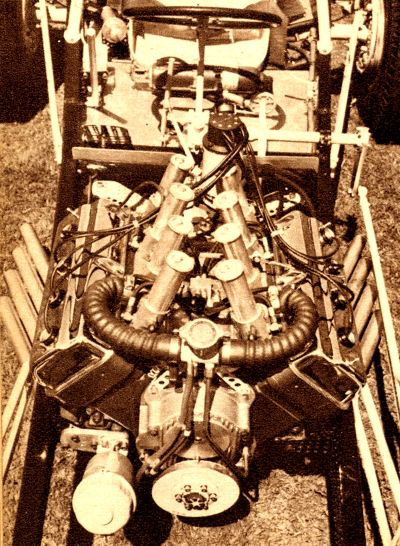 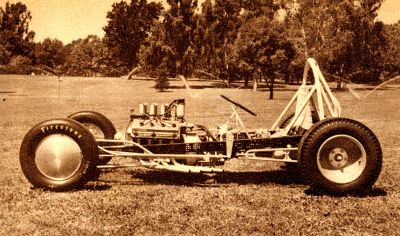 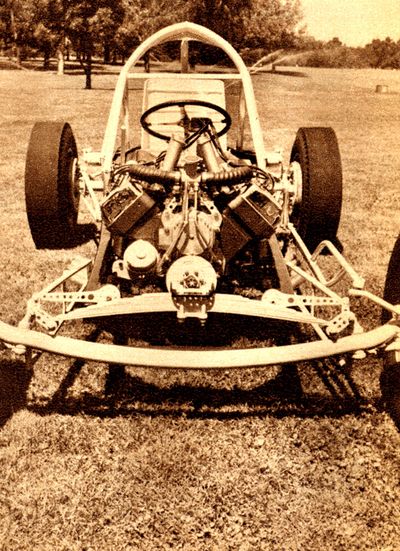 1930 Ford Roadster owned and built by the brothers Frank Puccinelli and George Puccinelli. The roadster managed to reach 136.36 mph in 11.20 seconds on the quarter mile. The doors, trunk lid, grille shell and hood were fiberglass, only the outer body panels were steel for lightness. The panels were welded together and braced with tubing. Brakes from a 1948 Lincoln was adapted to secure good braking, and Halibrand magnesium wheels with 7 inch Bruce slicks to keep good traction along with 7:10-16 Indy tires up front.. It featured a late model Ford rear end with wide Halibrand 3:94 to 1 final drive ratio. The boys reworked the steering mechanism from a 1932 Ford for center steering. Bell housing and clutch were enclosed by 1/4 inch steel scatter shield for protection in case something would explode. The foot pedal was drilled-out for lightness. Rear springs were Model-A units. The easily removable body revealed a heavily drilled-out 1930 Ford frame, boxed with 1/16 inch mild steel. The tubular front axle originated from a 1938 Ford along with 1940 Ford spindles and hubs. Spring were shortened 1932 Ford units. All radius rods on the car were fabricated 3/4 inch seamless tubing. Shocks were handmade friction-type of dural aluminum. The front cross member was made from tubing while the stock was retained in the rear. The light roadster was powered by a "B" class 1952 DeSoto Hemi engine. The engine had stock bore, stroke, pistons and valves. However, it featured an Iskendrian camshaft, Scintilla-Vertex magneto, Hilborn fuel injector with 18 nozzles and Lodge plugs. The heavy exhaust was custom made by the brothers, each of them were exactly 28" in length.[1]

Please get in touch with us at mail@kustomrama.com if you have additional information or photos to share about Frank & George Puccinelli's 1930 Ford.