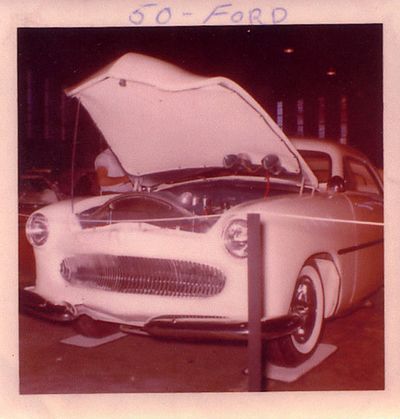 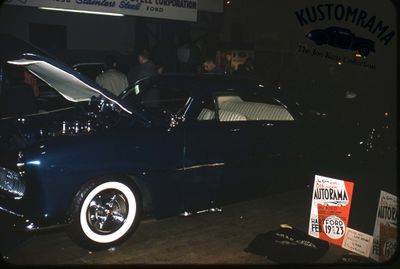 Herbert's Ford at the 1958 Hartford Autorama. Photo from The Joe Kizis Photo Collection. 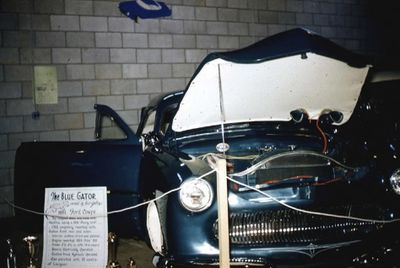 The Blue Gator at a show in Kuztown, Pennsylvania. Photo from the Roy Master collection.[1] 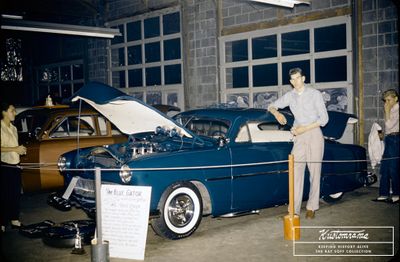 A photo of Slim with the Ford at an indoor car show. Photo from The Ray Soff Photo Collection.

1951 Ford owned by Road Knights member Herbert Gellings of Pompton Plains, New Jersey. Herb's Ford was nosed, decked and shaved for handles. The front was restyled by reshaping the grille shell, frenching the headlights, split bumper and a custom grille. The top was chopped and a 1941 Chevrolet roof was substituted. The deck lid was hydraulically operated and the doors were push button operated. The body was lowered by Z'ing the frame, a modification which brought the car 6 1/2 inches further to the ground. A reworked 1954 Oldsmobile 98 Rocket provided the 14 inch wheel to go 'round. The interior was completely done in rolls & pleats. Once the bodywork was done, it was painted 18 coats of lacquer. The first version of the car was painted white, but ut was later repainted a light blue, and went under the name "The Blue Gator". Unfortunately, the car caught fire and was completely destroyed. According to Customs Illustrated September 1959, Herb was in the progress of rebuilding it.[2]

Please get in touch with us at mail@kustomrama.com if you have additional information or photos to share about Herbert Gellings' 1951 Ford.