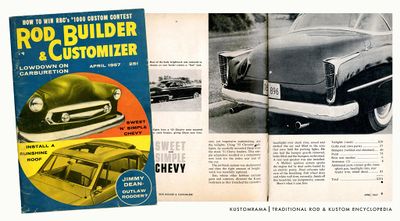 Jim's Chevrolet was featured on the cover of Rod Builder & Customizer April 1957.

1951 Chevrolet Bel-Air Hardtop owned by Jim Laughead of Chicago, Illinois. Local body shop Vince Kane Body Shop restyled the car for Jim, and according to a featured story in Rod Builder & Customizer April 1957, Jim found the parts and had Vince make the alterations; "Jim supervised his ideas as they were being transformed from the planning stage to the finished metal." 22 years old, Jim spent about a month and $261 to customize the Chevy.[1]

Up front, Vince frenched the headlights and made a grille surround out of two 1952 Chevrolet grille bars that he spliced together. A floating grille bar came from a 1951 Henry J. The rear of the car featured 1955 Chrysler taillights that were carefully mounted over the stock fenders. Vince nosed and decked the car before he gave it a jet-black paint job. The bumper guards were removed, the holes filled, and the bumpers re-chromed.[1]

When Carl Ericson did a featured story on the car for Rod Builder & Customizer magazine it ran a Mallory ignition system, dual carbs, an electric pump, and dual exhaust. It was dressed up with full wheel discs and whitewall tires. A rear-seat speaker provided cruising tunes.[1]

Please get in touch with us at mail@kustomrama.com if you have additional information or photos to share about Jim Laughead's 1951 Chevrolet.