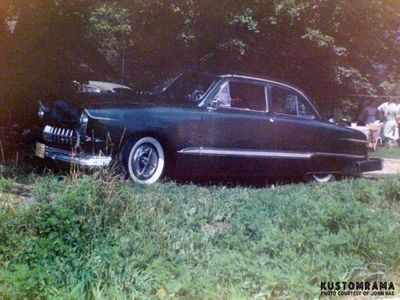 The Ford as it sat when John Rae bought it in the Summer of 1962. Photo courtesy of John Rae. 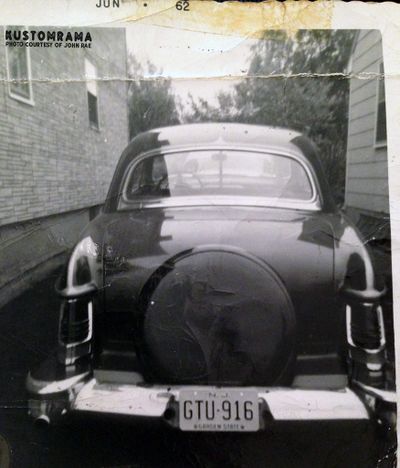 The quarter panels on the Ford were extended and modified to accept 1954 Mercury taillights. A later model bumper was installed and built into a continental kit. Photo courtesy of John Rae. 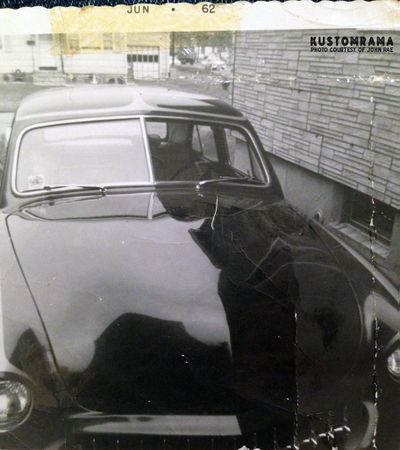 The front end featured fenched and hooded headlights. The hood was shaved and featured rounded corners. The grille opening had been reworked to house a 1954 Chevrolet grille. Photo courtesy of John Rae.

1951 Ford owned by John Rae of Kenilworth, New Jersey. John bought the car in Hanover, New Jersey in the summer of 1962. In 2015 he told Kustomrama that it was already customized when he got it; "I don't remember the sellers name, but I think it was originally done by Korky's Kustom." When John got the car, the original door handles had been shaved and replaced with Lincoln push-buttons. Up front, the headlights had been frenched and hooded. The hood was shaved and featured rounded corners, and the grille opening had been reworked to house a 1954 Chevrolet Corvette grille. In the rear, the quarter panels were extended and modified to accept 1954 Mercury taillights. A later model bumper was installed and built into a continental kit. It was dark green with gold scallops, and it featured a matching green and gold interior. It was dressed up featuring Dodge Lancer hubcaps, custom side trim and fender skirts. It ran a 292 Ford engine with Thunderbird valve covers and a 3 speed trans on the column.[1]

According to John, there were lots of hot rods in his area. There were two car hops on Route 22 in Union and Springfield. One was the Adventure, the other was the Big Top. That's were all the fast cars hung out; "There was lots of racing on Route 22 back in the early 1960s." John did not belong to a car club. He was drafted in September of 1965. While in the service his parents sold the car to a guy in Kenilworth.[1]

Please get in touch with us at mail@kustomrama.com if you have additional information or photos to share about John Rae's 1951 Ford.