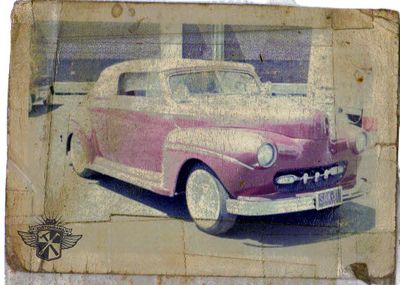 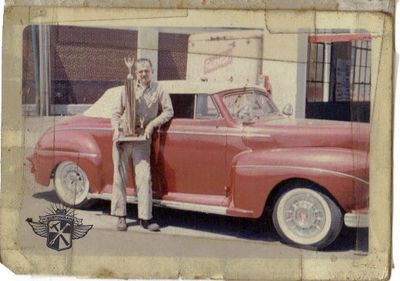 John with the first place trophy he won at the 1960 Syracuse Autorama. Photo provided by John Sak. 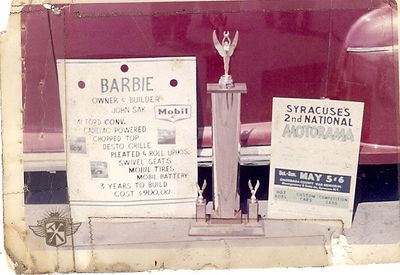 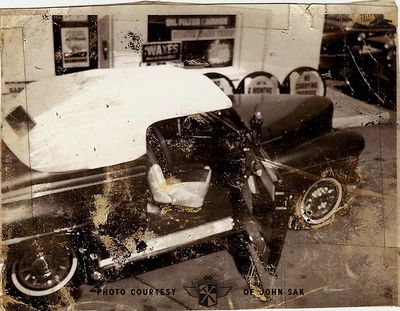 A photo of Barbie at John's gas station. This photo shows the swivel seats that John installed. Photo courtesy of John Sak. 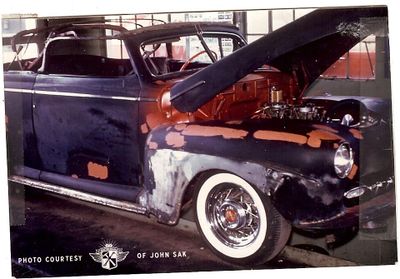 The Ford as it sat during the restoration. Photo courtesy of John Sak. 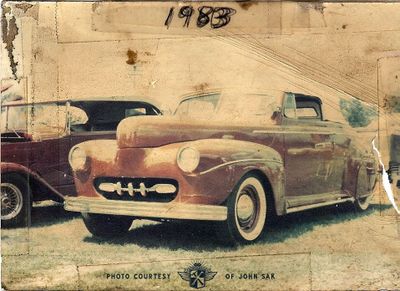 John's old Ford as it appeared after it had been restored in 1983. Photo courtesy of John Sak. 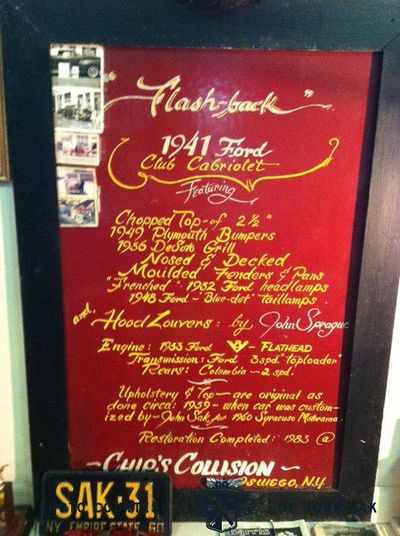 A sign used for the restored version of the car. Photo courtesy of John Sak. 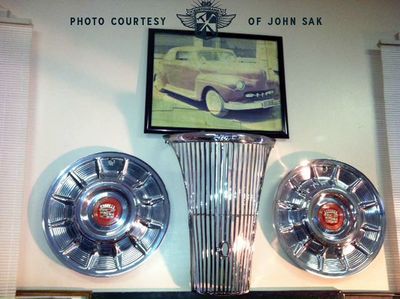 The original grille and hubcaps from Barbie hanging above John's fireplace. Photo courtesy of John Sak. 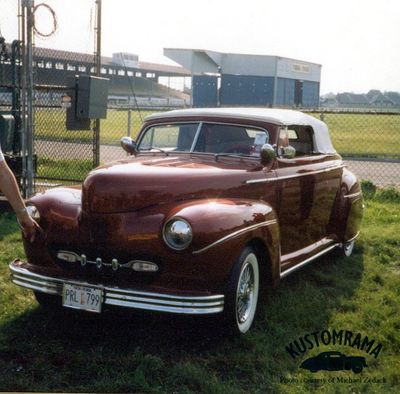 A photo of the Ford as it sat the day John Zedack bought it around 1985. Photo courtesy of Michael Zedack. 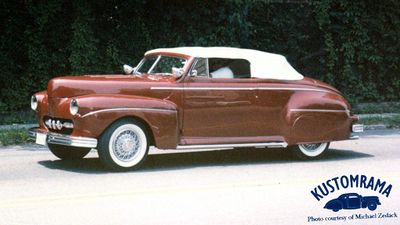 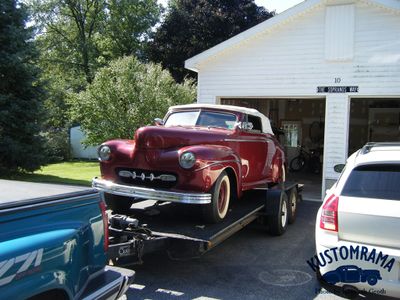 Barbie as she appeared in 2013. These are the photos current owner Kenneth Groth sent Kustomrama September 17, 2013. Photo courtesy of Kenneth Groth. 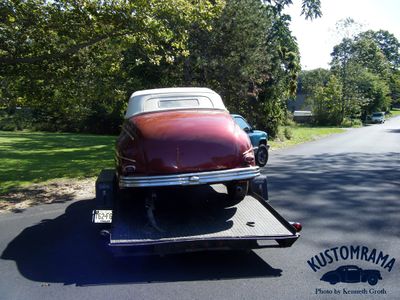 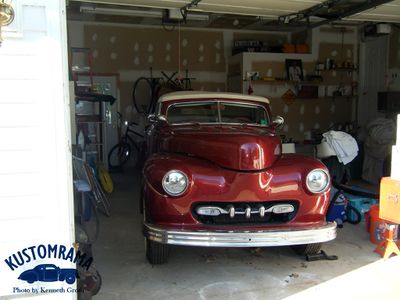 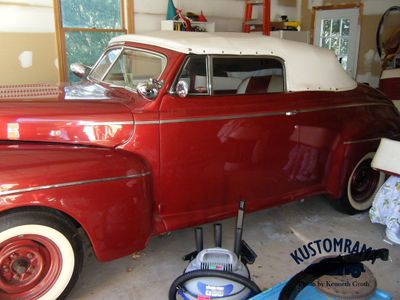 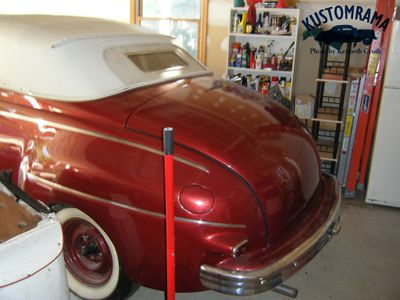 1941 Ford Converible owned and restyled by John Sak of Syracuse, New York. Named "Barbie", this 1941 Ford Convertibe was actually John's third 1941 Ford. Barbie was chopped 2 1/2 inches. All fenders were molded to the body and the front was restyled to accept a shortened 1955 DeSoto grille. The car was nosed, decked and shaved for door handles. The splash pans were molded to the body, and the stock bumpers were replaced by a set of 1949 Plymouth bumpers. 1948 Ford taillights were molded to the rear fenders, and the headlights featured frenched 1952 Ford headlights. The hood was louvered, and once the bodywork was done, John's convertible was painted Maroon. A white vinyl top was installed together with red and white rolled and pleated swivel bucket seats. A friend of John did the upholstery and top. A 1946 Ford banjo steering wheel was installed as well. Power came from a Cadillac engine. Dual dummy spotlights and 1957 Cadillac hubcaps wrapped up the style. The build was started in 1957, and it took three years and $900.00 to complete. Most of the work was done by John and a friend. Once completed, John won first place at the 2nd National Syracuse Autorama in 1960.[1]

John sold the convertible to a guy around the block in the 1970s. He kept it for a while before selling it to another guy around the block from John. The third owner ran a Citgo station, and for about 5 years the car sat alongside the station. Summer and winter. As John used to pass by the station, he got sick of seeing it with snow laying on the top. The car was eventually sold to a guy that lived in Lake Land, New York. After that the Cadillac engine froze up and cracked the block. With the block cracked, the car was sold to a guy in Oswego, New York. Chip's Collision of Oswego, New York installed a Ford flathead engine in it and painted it red. The restoration was completed in 1983, featuring the original upholstery and top that John installed around 1960. The restored version of the car featured a louvered hood by John Sprague. The restored version was sold to a fellow known as "Fast Eddie". "Fast Eddie" sold the car to an unknown buyer, who again sold it to Rich Ivencheck of Camillus, New York.[1] Around 1985 the car was sold to John Zedack of Clifton, New Jersey. John bought the car at a NSRA event in York, Pennsylvania. Zedack loved to drive his many custom cars, so he went over the convertible mechanically. When Zedack got the car the Cadillac engine had been replaced by a 1949 Ford flathead with a 1939 Ford top loader and a Columbia 2 speed rear end. Zedack eventually sold the car to another Clifton enthusiast named Philex.[2]

As time went by, John Sak regret that he had sold the car, so he began to trace it down. Not able to find his old custom, John heard rumors about the car being sold to Arizona or Nevada. In October of 2011 John wrote Kustomrama and asked if we could run his long lost custom in our Lost and Found section. Before writing Kustomrama John had been trying to locate the car for many years without luck. We ran the story, and over a year passed by without anyone answering the ad. September 17, 2013 Kustomrama received an email from Kenneth Groth of Branchville, New Jersey. Kenneth could inform that he was the current caretaker of the car, and that he had bought it from a man named Philix in Clifton, New Jersey in 1999. Kenneth had the old custom stored in a garage amongst other cars. When he purchased the convetible in 1999 It had been fit with skirts and Cadillac hub caps. Philix had stored the car in a garage for many years, and due to his wife illness Kenneth also stored the car in his garage for the next 13-14 years. When Kenneth wrote Kustomrama he planned to make a debut with the car in a few weeks.[3]

Please get in touch with us at mail@kustomrama.com if you have additional information or photos to share about John Sak's Third 1941 Ford.