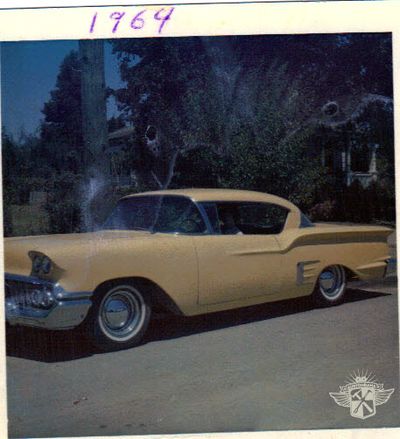 John and Rebecca's Impala shortly after they bought it in 1964. Photo provided by Rebecca Hackler.

1958 Chevrolet Impala owned by John and Rebecca Hackler of Sacramento, California. The Impala was John and Rebecca's first car, and they bought off a used car lot in the Monterey Bay area in California in 1964. The car was already customized when they bought it, and the salesman told the couple that the car had been restyled by Bill Cushenbery of Cushenbery Custom Shop. The body was shaved for door handles and most of its chrome, and it was painted a strong yellow and fit with a black interior. Rebecca recalls that it had bucket seat up front and an oddly shaped chrome armrest between the back seats. January 1965, after moving to Monterey, John and Rebecca traded the Impala to Glenn Martin for a Dodge Power Wagon. Glenn was both from the Monterey and King City areas.[1]

Please get in touch with us at mail@kustomrama.com if you have additional information or photos to share about John and Rebecca Hackler's 1958 Chevrolet.