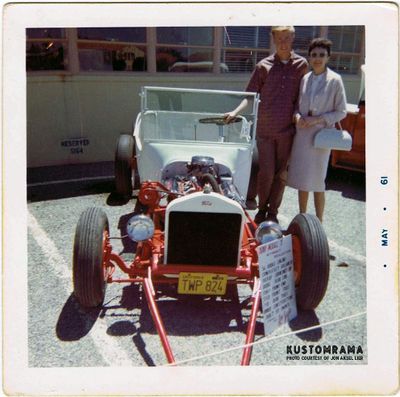 A photo of Lee and his mother with the T-bucket. The photo is dated May 1961, and the Model T looks newly painted. In the photo, the car is also shown with out the interior. Photo courtesy of Jon Aksel Lier. 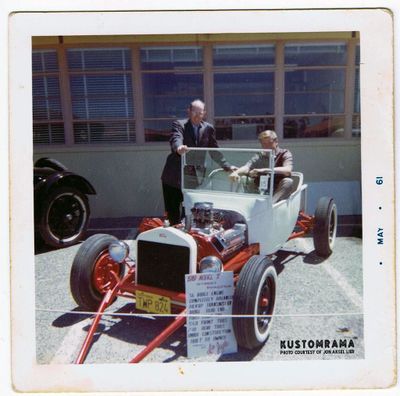 A photo of Lee and his step-dad with the T-bucket. The photo is dated May 1961. Photo courtesy of Jon Aksel Lier. 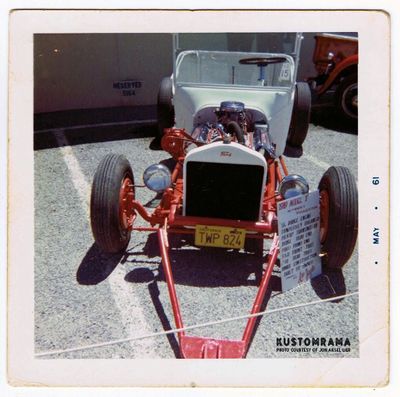 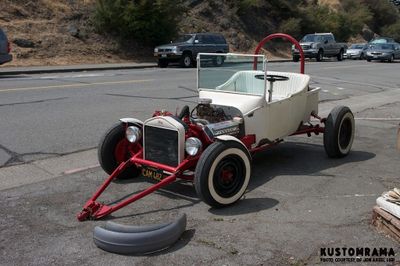 Lee's old hot rod as it appeared when it was advertised for sale on eBay in 2014. Photo courtesy of Jon Aksel Lier. 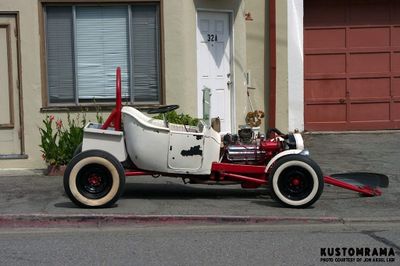 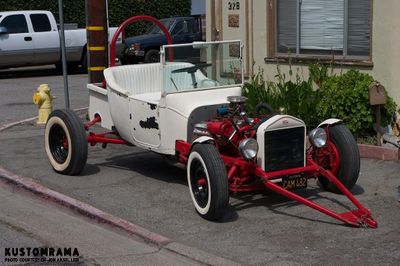 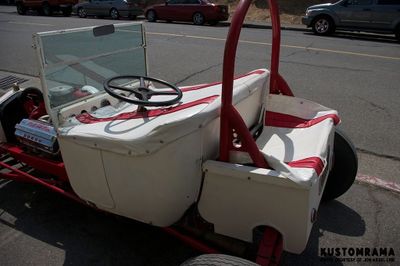 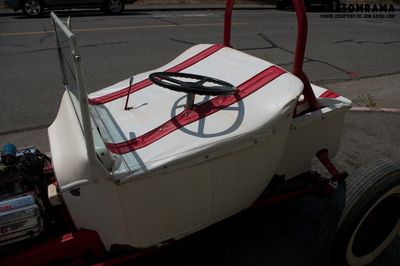 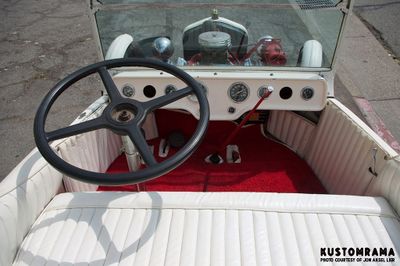 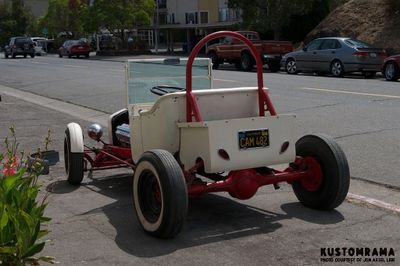 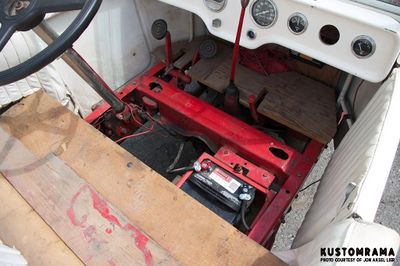 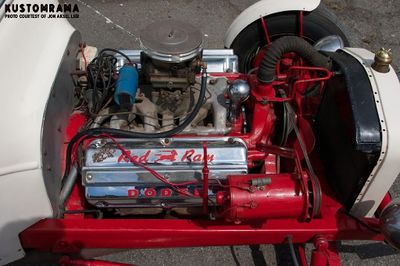 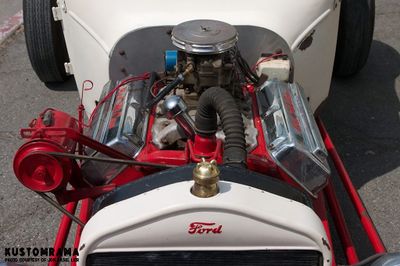 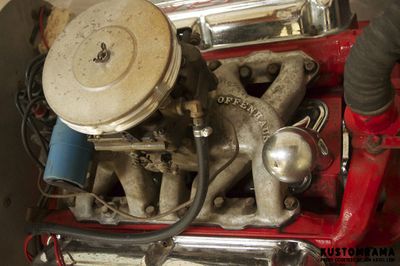 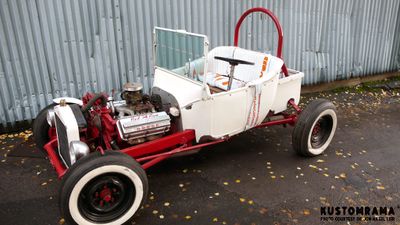 Lee's old hot rod as it sat in Oslo when Jon Aksel came to pick it up in October of 2014. Photo courtesy of Jon Aksel Lier. 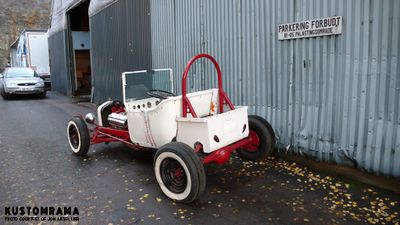 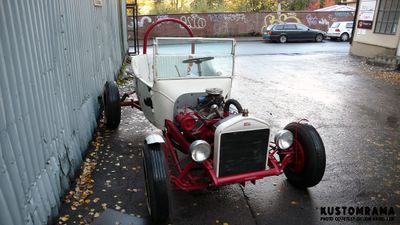 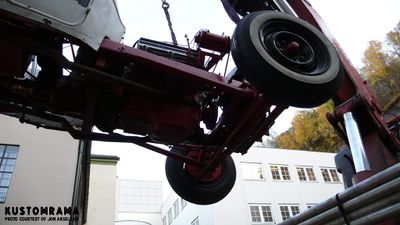 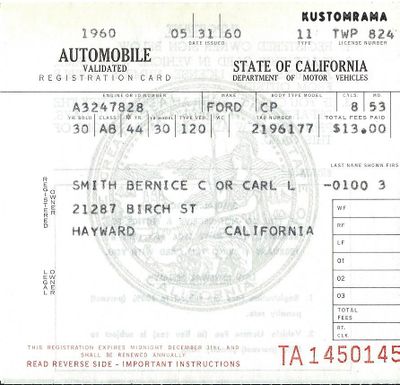 When Jon Aksel Lier bought the car in 2014, it came with a title from 1960. The title was issued on Lee's mother and step-father. Photo courtesy of Jon Aksel Lier. 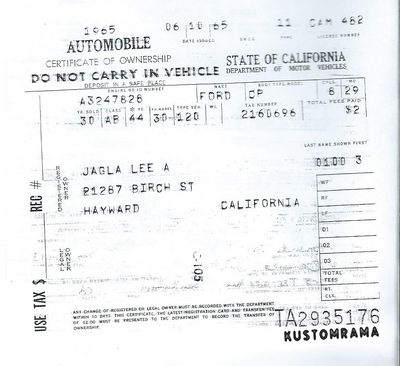 A title from 1965, this one was issued out to Lee. Photo courtesy of Jon Aksel Lier. 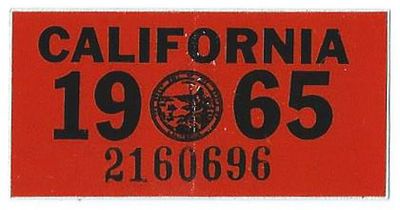 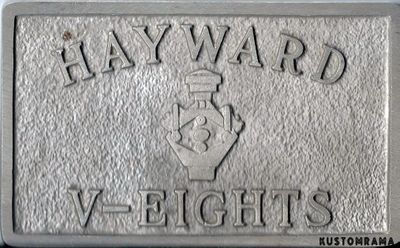 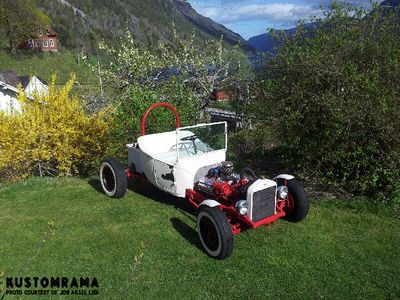 The old hot rod as it sat in May of 2015. Photo courtesy of Jon Aksel Lier. 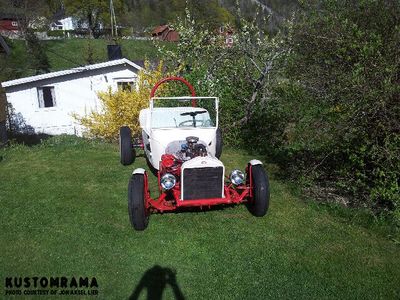 1923 Ford Model T roadster pick up owned and raced by Hayward V-Eights member Lee A. Jagla of Hayward, California. Lee got the hot rod as a gift from his parents for his high school graduation from Hayward High School in 1960. The Model T featured a 1923 Ford Model T body mounted on a 1930 Ford Model A frame. Power came from a 241 cu. in. 1953 Dodge baby Hemi that ran an Offenhauser intake manifold and a single 4 barrel carburetor. The engine was hooked to a 3 speed 1948 Ford pickup transmission, and the rear end was taken from a Dodge Coronet. A dropped axle brought the front of the car closer to the ground. It ran 1939 Ford taillights and Yankee brand headlights. Painted white with a red chassis, Lee fit it with a matching white rolled and pleated interior with red carpets. Matching tonneau covers were also made for the cockpit and the little bed.[1]

Lee raced the Model T in Hayward, and at Cal Poly University in San Luis Obispo from 1960 to 1964 as a part of the on-campus Roadsters Turtles car club and the Hayward V-Eights. After graduating from College in 1965 he purchased the car from his parents. After that it went into storage, and spent the next 48 years locked up in dry storage.[1]

When Lee passed away, his daughter sold the old hot rod as part of her dad's estate. In 2014 it was advertised for sale on eBay. Jon Aksel Lier of Tønsberg, Norway found the listing. He bid on it, won it, and had it sent to Norway. When Jon Aksel bought the car, Lee's daughter told him that she believed her dad had built most of the car. She could not confirm this, as she wasn't born back then. In fact, the car was actually put into storage before she was born; "Because dad was a gearhead, machinist and an engineer, I'm certain what you see is mostly his handiwork."[1]

Right before the car was advertised on eBay, it was driven a short distance to attend a local car show. California Shipping helped Jon Aksel ship the old hot rod across the ocean to Norway. It was sent in September of 2014, and arrived in Oslo a month later, October 16, 2014. After getting the car, Jon Aksel had to replace the crusty old tires, and look over all the mechanical components. He installed a set of Firestone 5.60x15 tires up front, and 7.10x15 in the rear, similar to the crusty old unbranded tires it came with. The engine fired and ran well, but the brakes were gone. Parts such as bushings, cooling hoses and more had to be replaced before the car could hit the road again after it's long sleep. Jon Aksel brought the car to his garage in Lårdal, and spent the Winter working on it, getting it ready for the 2015 season.[1]

Please get in touch with us at mail@kustomrama.com if you have additional information or photos to share about Lee A. Jagla's 1923 Ford.