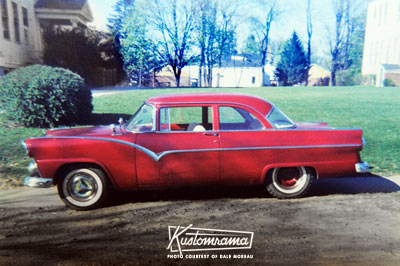 Dale Moreau's 1955 Ford Tudor of Lockport, New York. The mildly restyled Ford was Dale's first custom. Customs were their daily existence back then, and if you were driving a car that wasn't nosed and decked, it had to be your dad's car.

In the early 1960s Lockport was a small town of around 25,000 people. It was supported by many industries, but the main one was the Harrison Radiator plants of General Motors. Automotive photographer Dale Moreau grew up in Lockport. In 1962 he drove a mildly restyled 1955 Ford Tudor. In 2017 Dale told Sondre Kvipt of Kustomrama that a good share of the custom cars there or anywhere in the area were Fords; "Saying that my best buddy and I shared several non-Ford cars. One being a 1953 Pontiac convertible with an Olds V-8 engine. So the weekend cruises up and down Main street and down to the lower part of town on the Erie Canal were quite lively. Not anything like the movie American Graffiti, because that was shot in California and there were more people there and more action. We had four places to stop along the route. Number one was the Chrystal run by Jimmy Shumas. Jimmy ran a tight ship so we only went there with our parents. He ran it for so long that my mom had her first date there and so did I. Number two was the Royal, my mother told me to stay away from there because that is where all the wild kids went, of course, I never went there. Number three was Castles Dairy store on the east end of main. That was where the rich kids went with there new convertibles and cute girls. One guy was Al Vandermark with his black Olds ragtop. His family owned several of the industries in town. Number four was Reed’s Hot Dog stand down Gooding street hill and just at the turn across from the Odd Fellows home. It had $.25 dogs burgers and Cokes. It still exists and looks much the same as it did in 1957. Of course, the prices have gone up."[1]

Please get in touch with us at mail@kustomrama.com if you have additional information or photos to share about Lockport.