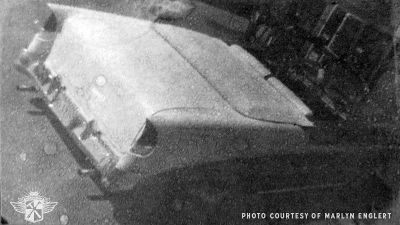 Marlyn's Chevrolet as it appeared in 1957, after it had been restyled by Phil Andersson. Photo courtesy of Marlyn Englert. 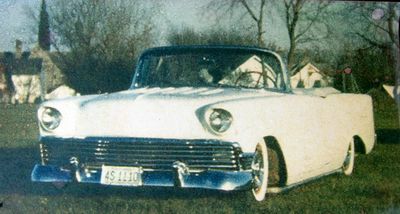 Marlyn had Phil restyle his Chevrolet again in 1958. Photo courtesy of Marlyn Englert.

The car as it appeared after Marlyn and Marva Faw added wild maroon scallops in 1959. Photo courtesy of Marlyn Englert. 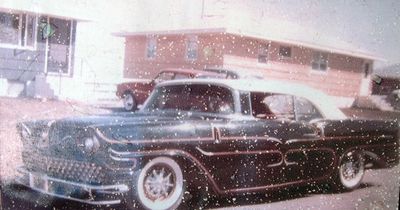 Marva Faw added quad headlights, and rendered the front in 1960. He also gave it a new paint job. Photo courtesy of Marlyn Englert. 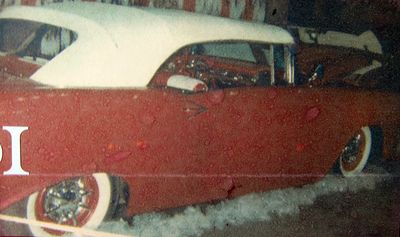 The old custom as it appeared in 1973, when it was owned by Norm Baltes. Photo courtesy of Marlyn Englert. 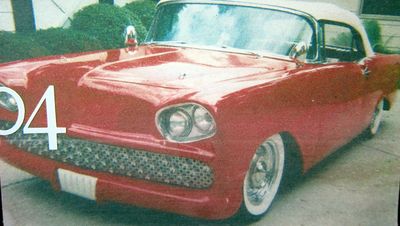 The Chevrolet as it looked when Marlyn bought the car back in 2004. Photo courtesy of Marlyn Englert. 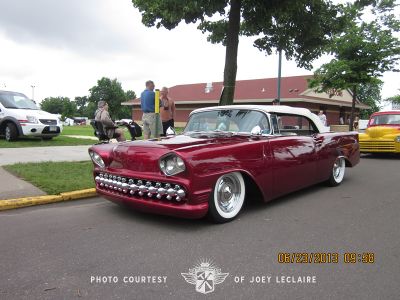 Marlyn's Chevrolet at the 2013 Back to the 50s car show in St. Paul, Minnesota. Photo by Joey LeClaire. 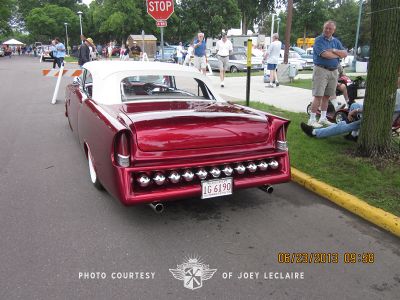 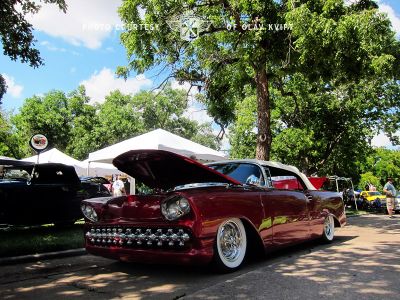 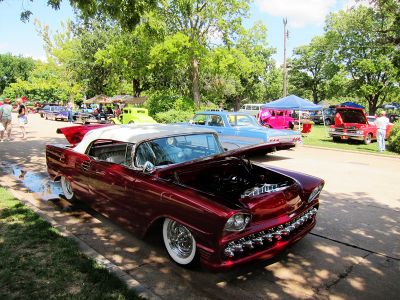 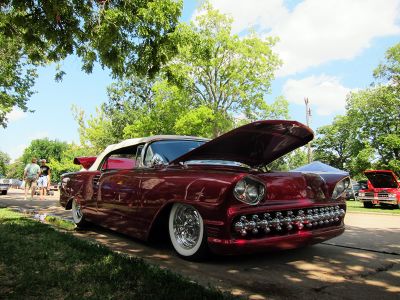 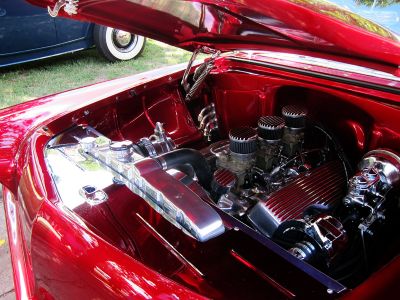 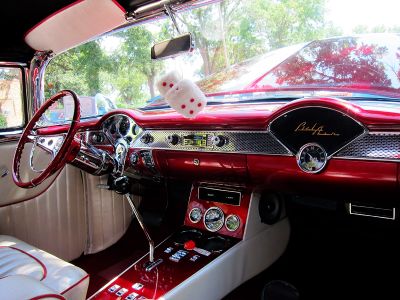 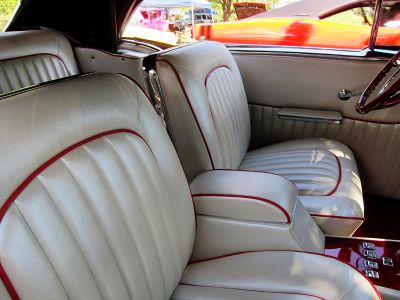 1956 Chevrolet convertible originally restyled by Phil Andersson of Minneapolis, Minnesota for Marlyn Englert, of Minneapolis, Minnesota. This was Marlyn’s second custom car, his first was a 1950 Chevrolet that Phil Andersson had restyled as well. One night, while driving the Chevy, an older man smashed into him, totaling the car. A local highway patrol was witness to the crash, and he could testify that it was not Marlyn’s fault. Marlyn went over to the local Chevrolet dealer, and bought a brand new 1956 Chevrolet Bel Air, paying down the loan with the insurance money from the crashed car.[1]

Marlyn was in high school at the time, and he wanted to have the nicest car at school. He choose Phil Andersson to customize it. He left the car in Phil’s shop in the morning before school, and picked it up after the school day was over. Phil nosed and decked the car, giving it a cleaner appearance. Side pipes were added, fender skirts were installed, and a set of 1956 Oldsmobile hubcaps wrapped up the style.[1]

In 1957, Marlyn had another local customizer, Marva Faw, shave the door handles, and install a set of 1957 Chrysler taillights. The car was also pinstriped. However he returned to Phil in 1958 to have it further restyled. Phil frenched the headlights by using the stock rings. He also removed the side trim. While he was at it, Phil did also louver the hood and install a tube grille. Once the bodywork was done, it was painted white.[1]

Time went by, and in 1959, Marlyn had Marva install a 348 engine. Marlyn and Marva teamed up one night and designed a wild maroon scallop paint job. However, the most extensive bodywork took place in 1960. In 1960 Marva made a whole new rear end, making a custom rolled pan, with a custom grille. Quad headlights were installed up front, and the hood was pancaked. The front also received a similar treatment as the rear, with a rolled pan and grille cavity filled with a custom knob grille. The bumpers were swapped in favor of nerf bars, and the windshield frame was chopped 2 inches as well. The car also received a new upholstery, done in white and red. It was painted black, white red outlines.[1]

In 1961, Elmer Bare installed a sunken antenna on the left front fender. He also made the side scoops on the quarter panels, and finished it off in red Metalflake. One year later in 1962, Marlyn decided to part with the car, selling it to Norm Baltes. 11 years later, Marlyn located the car, but Norm would not sell it to him. However, in 2004, Marlyn was able to buy the car back. Marlyn updated the drive train, installing a 200 R4 transmission, power disc brakes, and power steering. The knobs in the grille was swapped with bullets, and a top and interior were constructed. The car was painted Candy Apple Red, similar to how it was done in 1961. He also fit the car with chrome reverse with radial tires.[1]

Please get in touch with us at mail@kustomrama.com if you have additional information or photos to share about Marlyn Englert's 1956 Chevrolet.