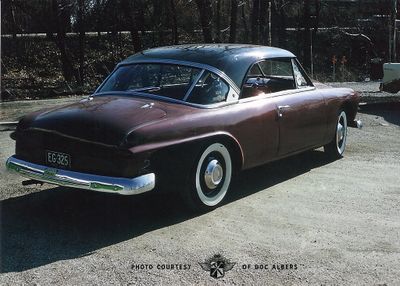 An early photo of the car, taken in 1958, after Blaine Stone had bought it. Photo courtesy of Doc Albers. 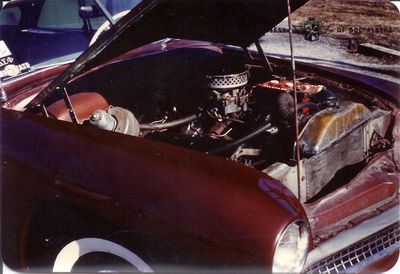 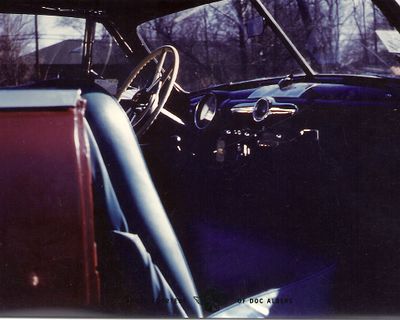 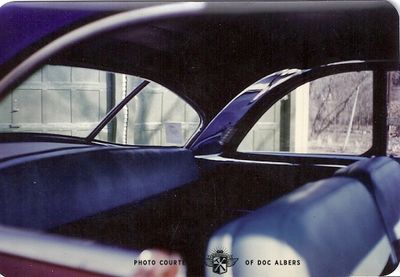 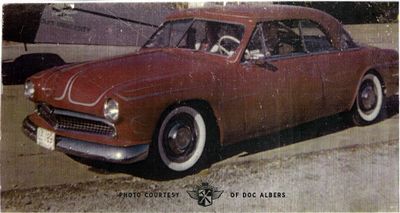 A later version of the car, featuring a scallop paint job by Jerry's Auto Body in Lakewood. This is how it looked when Duffy Denemark bought it from Blaine Stone. Photo courtesy of Doc Albers. 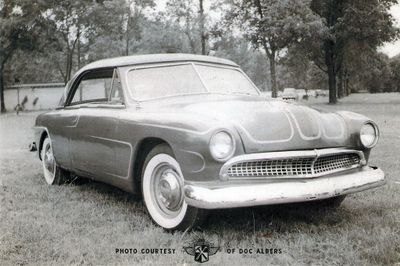 1949 Ford Convertible originally restyled by Milton DePuy of Cleveland, Ohio, in the mid 1950s. A later owner, Blaine Stone, believes the car was restyled and completed around 1956, as he remembers seing it on the local streets during 1957. Milton lived on the west side of Cleveland. Ed Kovachy and Jack Harris helped Milton with the build. The car was originally a convertible, but during the restyling, it was sectioned 4 inches, and fit with a 1951 Ford Victoria hardtop. The rear wheel openings were radiused and flaired. The flair ran from the top of the wheel opening and back into the taillight tunnel. Early photos of the car from 1958, shows it with door handles, sporting a black and dark red metallic paint job. The deck lid on this version was shaved, and the taillights were frenched, tunneled and fit with blue dots. Up front, the headlights were frenched and tunneled with chrome rims. A shaved 1951 Ford hood was also installed along with a 1955 Ford grille. The body was painted black under the flair and taillight-tunnel, and flames were used to separate the black and red paint job at the end of the quarter panels. Inside, it featured cut-down Studebaker Hawk seats. Milton eventually sold the car, and it went trough several owners before it ended up with Bill Steiskal of Lakewood, Ohio. Bill bought the car from a guy named Ron. Ron sold the car so he could get some money to get married. Bill sold the car to Blaine "Pebbles" Stone Jr. of Lakewood in 1958. Blaine drove the car to St. Louis for his freshman year at the St. Louis University in September of 1958. During that time he made quite a few 620 mile trips home to Lakewood, even during the winter, without a single breakdown. When Blaine got the car it was powered by a Cadillac 331 cu. in. V8. It was a road runner, but it was geared low for acceleration, so the gas milage was about ten or eleven mpg. The Cadillac engine was mated to a LaSalle 3 speed floor shift transmission trough a Ford tuck clutch. According to Blaine, this configuration was installed before Bill Steiskal bought the car. In 1959 Blaine had Jerry Koenigsmark of Jerry's Auto Body in Lakewood finalize the de-chroming by shaving the door handles. Jerry did also give the car a Thunderbird Brandywine Red paint job with silver scallops.[1]

Blaine sold the car to Duffy Denemark of Lakewood, Ohio around 1960. Duffy and Blaine were friends, and the Ford was actually the only custom in their crowd. After Duffy had owned it for a while, it ended up with Robert "Doc" Albers, also he from of Lakewood. Doc's dad bought the sectioned custom from from Duffy, Doc's brother in law. After buying it, the car sat in a rented garage for a while, before Doc's dad encouraged him to consider fixing it up because it had "pick up ability". Doc's dad had it towed to his company's warehouse, where Doc started to work on it. There was no motor in the car, but it had a LaSalle transmission and a bell housing that fit a Cadillac motor. Doc learned a lot of things fixing up the old custom. Kingpins, swapping out a third member, converting from 6 to 12 volts, including gauges, installing a hydraulic clutch using another brake master cylinder alongside the original brake master cylinder, and drilling the bell housing for the slave cylinder. He got most of a Cadillac motor from an engine swap he did a year earlier on a 1954 Cadillac convertible. He missed a 12 volt starter though, and found a guy who was junking a 12 volt Cadillac. The owner told Doc he could take the starter if he pushed the Cadillac to the junkyard. That was no problem for young Doc, and he used the family 1963 Ford Falcon, with a 6 cylinder and an automatic transmission to push the huge Cadillac. The Falcon overheated about one block from the junkyard, but he got the starter. Doc's goal was to be able to drive his Fordillac on the last day of his senior year. After a few test runs on the streets around the warehouse on Sundays, he was finally ready to drive his custom home. It had headlights, one tail and brake light, and no horn, and he had stripped all of the 13 coats of paint off the car, and covered it with rattle can primer. Doc remembers hat there was a lot of lead under the paint where the sectioning had been done. Doc was able to drive the car as described on his last day of his senior year as planned. He even had a drag race in the parking lot that he won. The same summer, Doc drove the Ford a lot of places. One day the clutch pedal went to the floor, and the clutch would not disengage. The rod between the slave cylinder and fork had been bent, and Doc had to limp it home without a clutch. He started it in 2nd gear, and turned it off when he had to stop. Back home he straightened the rod and slipped a pipe over it. A friend of Doc, Mike Durovka, finshed up the bodywork, and primered the car black for Doc. Doc remembers that he had to pay Mike $100.00 for the job, a whole lot of money back then.[2]

As time went on, Doc changed over to a hydramatic transmission, which meant that he had to cut the x-frame. Dual quads were installed as well, and Doc believes that he turned in the 14's at the strip with this configuration. He also remembers that the mechanical fuel pump could not feed the carbs enough gas right at the end of the quarter mile. A friend, Doug Seybold, wanted Doc to tow him to the strip, Dragway 42. Doc agreed, and towed Doug about 40 miles. When they reached the strip, Doug's car failed the tech inspection, and Doc asked the tech guy if he could race instead. Doc passed the inspection until they asked him how many inches it was sectioned. Doc told him 4 inches, and the tech guy failed him. If Doc had said 2 inches instead, he would have passed the car. The other tracks Doc had gone to in the past did not care about sectioning.[2]

Doc sold the car to Russell Standish of Tinley Park, Illinois in 1964. Russel sold it to Sam Gabrielson, who lived in the Dayton, Ohio area. Sam was a native American Indian, who also drove a truck for maybe Subler or Sumark. Sam died in 2002. He had a brother named Orren, from Rockford, Illinois who died in 2006. Orren had a garage, and Robert "Doc" Albers, who owned the car in the 1960s, has been trying to get more information about the garage in case Orren had children who might know something. Doc is still looking for his old custom, so if you have any leads on this car, email us at mail@kustomrama.com.

Please get in touch with us at mail@kustomrama.com if you have additional information or photos to share about Milton DePuy's 1949 Ford.