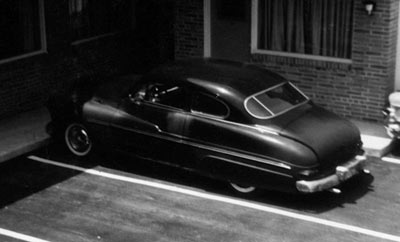 Paul Wood's 1949 Mercury Coupe of Richmond Hill, New York. Restyled around 1958, Woody’s Merc was built in the street in, in front of his girlfriend's house. Woody had acetylene and oxygen tanks in the trunk of the car that he would roll out whenever he was working on the car. 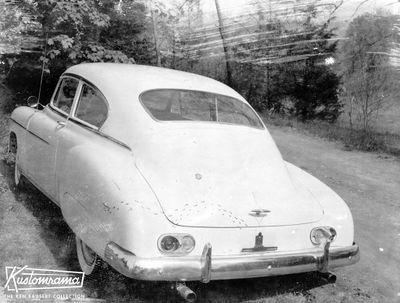 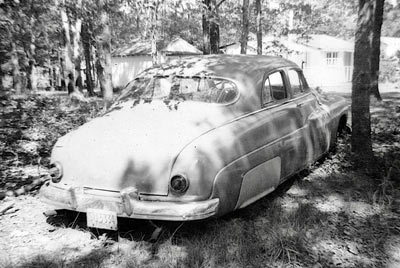 Billy Stein's 1950 Mercury Four-Door of New York City, New York. Billy lived in the Richmond Hill neighbourhood in Queens, and he got the Mercury on the road around 1961. Photo from The Ken Bausert Collection. 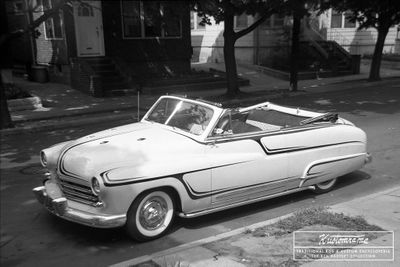 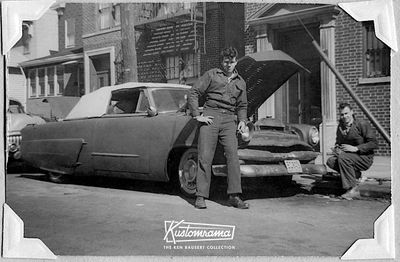 A photo of Paul "Woody" Wood and Sal Consiglio in front of Woody’s 1953 Ford. “Back in the day, Woody had no garage and often worked on the car in the street. This was shot on 116th Street, just north of Liberty Avenue, in Richmond Hill, around 1961,” Ken Bausert told Sondre Kvipt of Kustomrama. Photo from The Ken Bausert Collection. 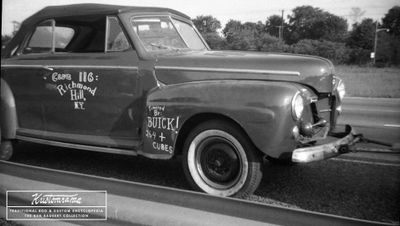 This 1947 Ford convertible belonged to a friend of Ken Bausert from the 116th Street Garages. "On the west side of the 116th street and Atlantic Avenue in Richmond Hill was a repair shop called "Doggler's Repair Shop." A couple of my friends in the area worked there. A lot of the houses that were on Atlantic Avenue had garages on the east side of 116th Street. My friends would rent those garages to work on their cars. One of them was always there working on their cars, so people would often stop by there to have a look or hang out." Built to go, the 47 Ford was powered by a late model Buick OHV 8 engine. Ken snapped this photo on his way to the Westhampton Drags. Photo from The Ken Bausert Photo Collection. 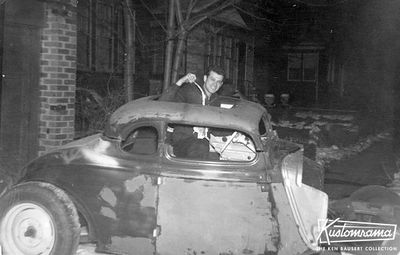 John Consiglio in a 1934 Ford coupe project. The work was started by one of the guys at the 116th Street garages in Richmond Hill. He was in the process of chopping the top, but the car was just a body shell and needed a ton of work, so the fellow decided to get rid of it. He was going to tow it to a junkyard when Sal Consiglio, John Consiglio and Ken Bausert chipped in $5 apiece and bought the thing for $15. "After that, we didn't know where we were going to store it and what we were going to do with it so, in a week or so, we wound up towing it to the junkyard," Ken told Kustomrama in 2017. Ken believes this photo was taken in the autumn of 1961. Photo from The Ken Bausert Photo Collection. 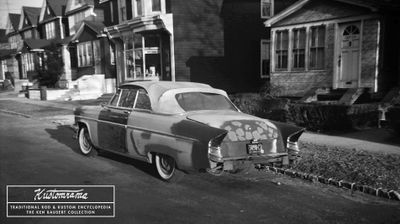 Richmond Hill circa 1961 - 1962. An in-progress photo of Phil Turano's 1954 Mercury Convertible taken after Paul "Woody" Wood had grafted Packard taillights onto the quarter panels on the car. The photo was taken in front of Ken Bausert's parents house in Richmond Hill. Photo from The Ken Bausert Photo Collection. 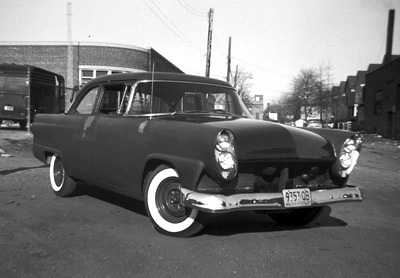 Sal Consiglio's 1955 Ford of New York City, New York. Sal lived in the Richmond Hill neighbourhood. He was a member of the 1320 Crusaders car club, and his Ford was restyled in 1962. The build was sold before it was completed. 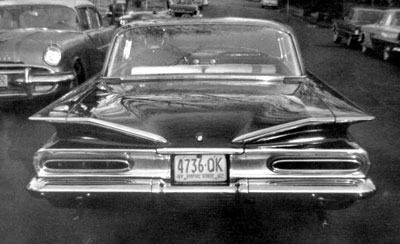 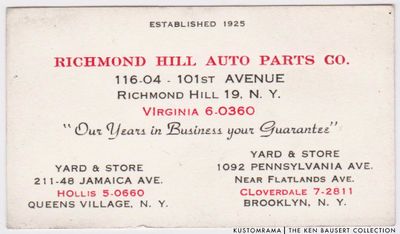 A business card from Richmond Hill Auto Parts Company, or Cheap Mike's Wrecking Yard, as Ken Bausert and his buddies called it. This was where the kids from Richmond Hill bought parts for their cars in the 1950s and the 1960s, such as the Oldsmobile grille Ken ran in his Mercury. Photo from The Ken Bausert Collection.

Richmond Hill is a commercial and residential neighborhood located in the southwestern section of the borough of Queens, in New York City, New York.

Please get in touch with us at mail@kustomrama.com if you have additional information or photos to share about Richmond Hill.