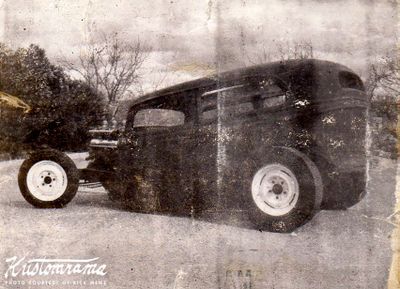 A photo of Rick's tudor sedan taken during construction. In 1962 Rick decided to go to college, so he sold the build before it was completed. Photo courtesy of Rick Menz.

1934 Ford tudor-sedan owned by Chancellors of Van Nuys member Rick Menz of Sepulveda, California. Rick joined the Chancellors in 1960. At the time he was building the Ford. "My '34 was going to be for street use," Rick told Sondre Kvipt of Kustomrama in 2018. The body was channeled over the frame, and a photo from Rick's collection shows it sitting with a forward rake. "The channeling you see was only temporary at the time. It would have changed slightly, but college became more important, so the hot rod hobby was put on hold until somewhere in the early 1980s." Power came from a Buick Nailhead engine that was fed through six carburetors. Rick couldn't afford to have someone work on his cars, so he did all the work himself. He sold the car in 1962. The person that bought the car was not a member of the club, and Rick doesn't know what happened to it.[1]

Please get in touch with us at mail@kustomrama.com if you have additional information or photos to share about Rick Menz' 1934 Ford.