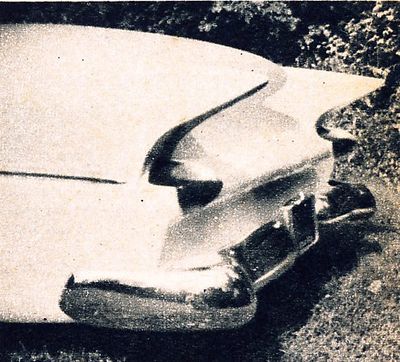 1955 Plymouth Convertible owned and restyled by Robert Wayne Owens of Kenosha, Wisconsin. This was Bob's fifth custom, however the taillights were done by a local body shop. The car was nosed, decked and shaved for door handles. Up front, he used a 1954 Chevrolet grille with ten extra teeth. The side trim was stock, but it was mounted in reversed position and re-located. The skirts were 1957 Mercury units with custom airscoops. Full-length lakes pipes was also installed. The taillights were from a 1956 Oldsmobile, installed nicely in the custom made fins, which extended the rear end 8 inches. A split bumper from a 1955 Pontiac was mounted, with shaved bumper bolts. [1]

Please get in touch with us at mail@kustomrama.com if you have additional information or photos to share about Robert Wayne Owens' 1955 Plymouth.