From Kustomrama
(Redirected from The Pacifica)
Jump to: navigation, search 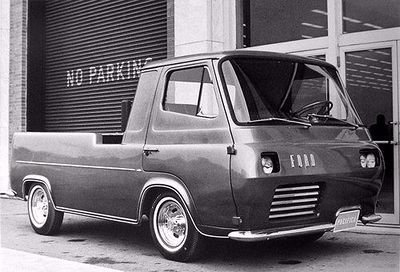 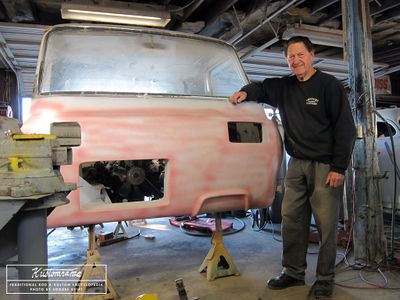 Gene Winfield built two asymmetrical customs for the Ford Custom Car Caravan. Best known is the long lost Pacifica that he recreated a few years ago. "I really liked the Econoline pickup in stock form," Winfield told David Grant when he was working on the book "The Legendary Hot Rods and Custom Cars of Gene Winfield, "so when we were given the opportunity to customize the Econoline, we held nothing back." This photo of Gene with the Pacifica recreation was taken in 2011. Photo by Sondre Kvipt - Kustomrama. 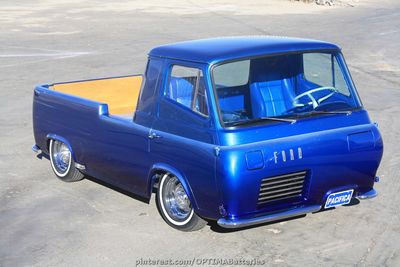 The Pacifica recreation was completed in 2012. Photo courtesy of Optima Batteries.

1962 Ford Econoline pickup restyled by Gene Winfield of Winfield's Custom Shop for the Ford Motor Company in 1962. At the time, Gene was part of a group that Ford Motor Company was sponsoring called the Ford Custom Car Caravan. Ford hand picked a group of customizers that they provided with engineering prototypes. Engineering prototypes were cars without serial numbers. Test cars, that were not going to be sold. New test cars were given the customizers, so they could build them into show cars that Ford could display to gain attraction on their new models. When Gene built the Pacifica he was in a hurry, and as Ford didn't have a prototype available, he went out and bought a brand new 1962 Ford Econoline Pickup that he customized. At the time Ernie "Big Ern" Graves was working for Gene. Ernie had gone to Art Center for a year or two, so he and Gene designed the Pacifica and decided what they wanted to do. They showed the proposal to Ford. They liked it and told Gene to go ahead and build it right away. They built it in Gene's shop over a period of 30 - 60 days. Gene remembers that it was a very quick project. He had a lot of people working on it as well, so he could get it done in time. The Pacifica was a 6 cylinder car. During the build up the drivetrain and the underneath of the car was kept stock. The car had an asymmetrical design, featuring two headlights on the drivers side, and one headlight on the passenger side. The rear of the car was restyled similar, with two taillights on the driver side, and one on the passenger side. The grille, license plates and bumpers were also off center. The body was painted blue metallic. And the car was then called the Pacifica after the Pacific Ocean.[1]

Once the build was completed, Ford wanted Gene to take the car to a show in Portland, Oregon for it's debut. Gene drove the truck from Modesto to Portland. He drove trough three snow storms. It was freezing cold outside, and Gene didn't have a heater. He arrived at the show, cleaned it all up and displayed. After the show, Ford took over the car and hauled it all over the United States with their big trucks. After showing the car, Ford sold the Pacifica to famed Indianapolis driver Troy Ruttman, Jr.. Ruttman's group used it as a parts chaser. In 1969 Ruttman was killed in a super-modified race, and Gene Winfield lost track of the truck. Later on Gene started to look for the truck. He ran ads for it in the Dearborn area, and he located Ruttman's brother to check if he knew what happened to it. Not able to locate it, Gene started to think about the idea of building a recreation of the old show car. Gene's buddy LeRoy Goulart, that Gene restyled a 1951 Ford for in the 1950s, knew that Gene wanted to clone the Pacifica, so he gave him a 1962 Ford Econoline Pickup for his birthday. Gene went ahead and built a recreation of the car that was completed in 2012.[1]

Please get in touch with us at mail@kustomrama.com if you have additional information or photos to share about 1963 Ford Econoline Pacifica.