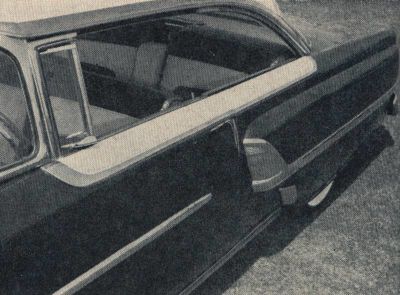 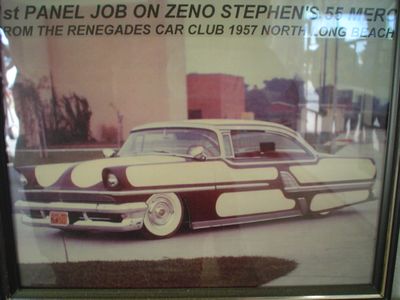 A photo from the Larry Watson Museum showing Zeno's Mercury after it received the first Panel Paint job ever.Photo by Eryk of the Los Boulevardos Car Club.

As it was featured in February 1959. Photo by Colin Creitz

1955 Mercury Montclair owned by Zeno Stephens of Long Beach, California. Zeno was a member of the Renegades Car Club. The car was mildly customized by shaving the door handles and replacing the handles with pushbuttons. The car featured a two tone dark red and white paint. Dark pinstriping was used on the white areas, and white stripes were used on the dark red areas. The pinstriping was done by Dick Williams.

Zeno's Mercury was later Panel Painted by Larry Watson of Watson's House of Style. Many belives that Larry invented the Panel Paint Job when he painted his own 1958 Ford Thunderbird. The Thunderbird was the first car ever featuring a silver pearl and candy burgundy paint job, but before he painted panels on his own car he had already paneled Zeno's Mercury. Zeno wanted something different, no scallops or flames, so Larry body paneled it. Larry painted the car in Titian Red and striped it in gold. After painting the car Larry never saw it again, not in a magazine, or at a car show, nowhere. A photo hanging in the Larry Watson Museum dating back to 1957 shows the car with a red and white panel paint job. [1]

When it was featured in the February 1959 issue of Car Craft, it was white and featured a 1955 Lincoln grille. It was upholstered in white Naugahyde.[2]

Please get in touch with us at mail@kustomrama.com if you have additional information or photos to share about Zeno Stephens' 1955 Mercury.