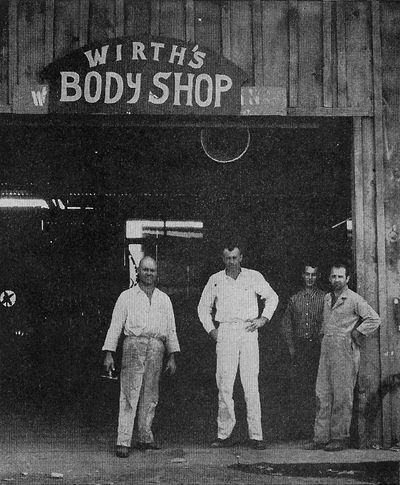 A photo of J. R. Wirth and Bill Babb standing in white in the doorway of their shop. This photo was published in Trend Book 175 Custom Cars 1959 Annual in a story about how the custom body shops influenced the styling.

Billy "Bill" Babb is a legendary custom car builder. In the 1940s Bill raced jalopy's. In the early 1950s he ran his own custom shop, Bill Babb's Custom Shop in Glendale, California. In 2015 Bill's daughter, Babette Nelson, told Kustomrama that she was brought up as a baby at the race track when Bill raced jalopies; "Then car shows in the 1950s, sales meetings at our home, and his warehouse in our backyard."

Later on, he became a part-owner of Wirth's Body Shop in Campbell, California.

In 2014 Joe Crisafulli told Kustomrama that Babb manufactured a flexible bondo that worked pretty good. According to Bill's daughter, Babette Nelson, Bill called the bondo resurfacing emulsion; "At the time he had a business called Auto Craft Body Supply in San Jose, California. This was after his body shop days in the 1960s. Dad hired a fleet of salesmen to go around to body shops in Corvair Vans" The vans were painted the same color. "It was trial and error because the product would bubble and crack so he'd work out those issues, train his sales force, go out and try it again," Babette told Kustomrama in 2015.

He passed away many years ago.[1]

Please get in touch with us at mail@kustomrama.com if you have additional information or photos to share about Bill Babb.