The car as it appeared on the cover of Rod & Custom April 1958. Photo by Peter Sukalac 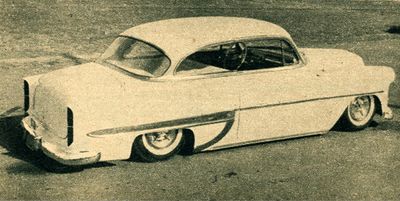 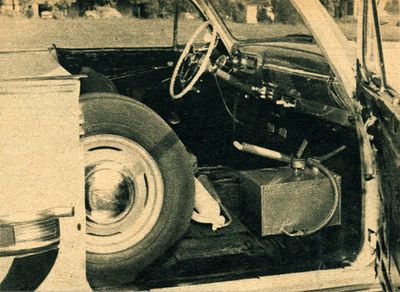 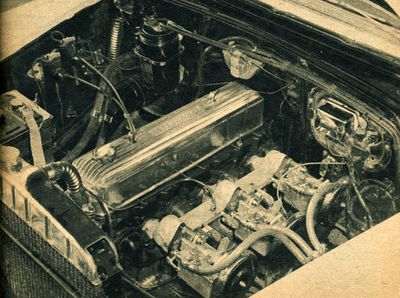 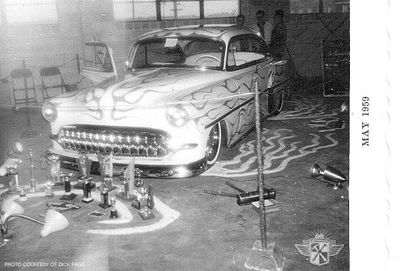 A photo of the flamed version of Bill's Chevrolet dated May 1959. Photo courtesy of Dick Page. 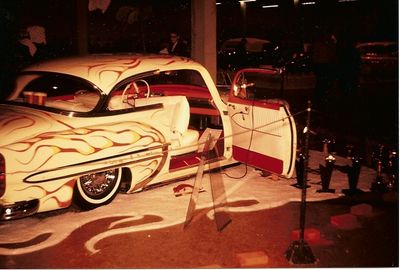 1953 Chevrolet Bel Air owned by Throttle Kings of Portland member Bill Hoffman of Portland, Oregon. In 1957 Bill had George Schultz of Wilkenson’s Body Shop perform some minor bodywork to the car. This version was painted in white enamel. One year later, in 1958, Bill brought his Chevy back to Wilkenson’s Body Shop for more extensive modifications. Bill's hardtop was originally a 2-door. George Schultz and Von Hunter removed the posts on the car and increased the side window space. With the car converted to a hardtop, the quarter glass needed to be slid in and out of position, as loss of the center post prevents raising and lowering the glass in the generally accepted method. The car’s door handles and the deck lid were shaved and the hood was nosed and peaked as well. The headlights were frenched and recessed by using 1954 Chevrolet headlight rims. The grille was modified by adding additional '53 grille teeth.[1] Butted 1955 Mercury taillights were frenched in the tunneled opening that was made. This modification blended well with the car's styling.[2] The car was powered by a souped up 261 inch 6 cylinder engine, that came from a garbage truck. It was equipped with way oversize intake valves, an Iskendrian camshaft, Thomas lifters, 1953 Chevrolet Corvette intake and exhaust manifolds, and a Rockford 9"clutch connected to a 1937 Packard floor shift transmission. The fuel was supplied by three Carter side draft carburetors. The valve train was quieted with an aluminum Offenhauser valve cover. The Chev was radically lowered and the suspension setup permitted quick and easy raising manually to clear manhole covers in the streets of Portland. The great tin and lead work, as well as the white paint, was performed by George Schultz and Von Hunter of Wilkenson’s Body Shop. George and Von Hunter produced the "bright" final white enamel finish after all of the major custom work was completed. The paint was made from the finest paint they could get from the Kenworth Truck Factory. According to Bill, it actually glowed. Once completed, Bill named his car the "Naughty Lady".[3]

The interior was gutted to decrease weight; the passenger seat compartment was occupied by an aluminum seat, a fire extinguisher and the fuel pressure tank. The "competition" interior was the result of the need to get the car ready quickly for a car show. The empty back seat area was covered with just a white vinyl tarp to conceal the empty space. Bill always kept his car in show condition, but it was no slouch on the drag strip, by April 1958, it held six quarter mile records both in and out of the Oregon area. It was all good enough for high 90 mph time slips at the drags, which made it a winner.[3]

By May of 1959 Bill's Chevrolet it sported red, yellow, orange and blue flames painted by Leroy Teeple. Bill hand assembled the spoke wheels with small bald center caps. Both bumpers were filled and the rear bumper was fit with a 1949 Chevrolet license plate bracket. The exhaust was routed through the bumper ends due to the radical lowering. The competition interior was replaced with an all white “extravaganza” stitched by Lee Hetzler, owner of Hollywood Auto Upholstery.[3]

Bill sold the car to a “cutey” from Eureka, California and it was rescued years later by a Rodder from Vancouver, Washington, and is still in his barn as per recent “rumors”.[3]

Please get in touch with us at mail@kustomrama.com if you have additional information or photos to share about Bill Hoffman's 1953 Chevrolet.