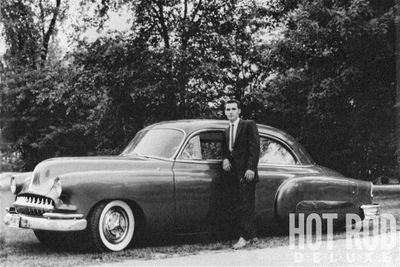 A photo of Carl with the Chevy in 1958. Photo courtesy of Hot Rod DeLuxe. 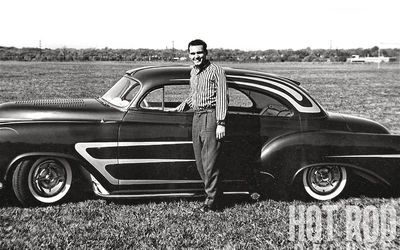 Carl with the chopped version of the Chevrolet in 1960. Photo courtesy of Hot Rod DeLuxe. 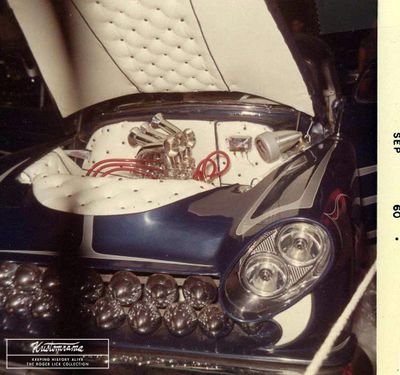 A photo of the Exotic Empress taken at an indoor car show circa 1960. Photo from The Roger Lick Photo Collection. 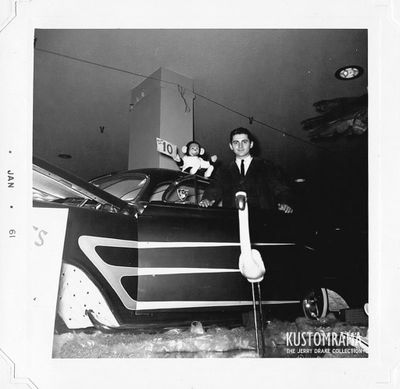 A photo of Carl with the car at the 1961 Lansing Rod & Custom Show. Photo from the Jerry Drake Photo Collection. 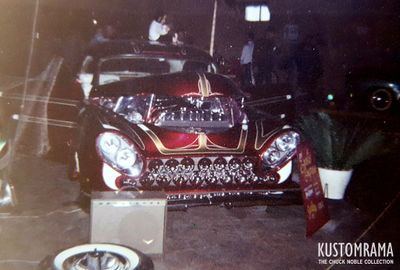 The Exotic Empress at an indoor car show in 1962. Photo from the Chuck Noble Photo Collection. 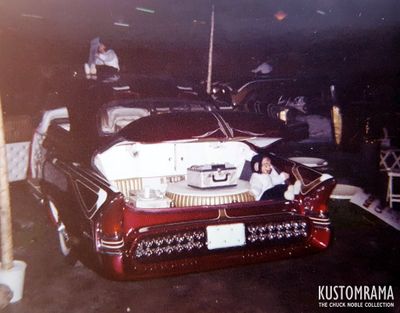 A rear end shot of the Exotic Empress. Carl's exotic display at the show included palms and monkey-dolls. Photo from the Chuck Noble Photo Collection. 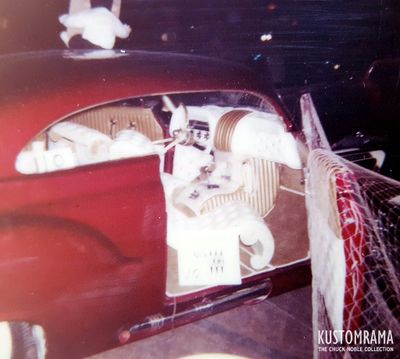 An interior shot of the Exotic Empress. Photo from the Chuck Noble Photo Collection.

1951 Chevrolet Styline Deluxe owned and restyled by Carl Casper of Flint, Michigan. The Chevrolet was Carl's first car, and he purchased it for $300 in 1956, when he was 15 years old. Before he was licensed to drive, Carl started making modifications to the car. It was his only means of transportation when he turned 16, and the Chevy was driven throughout the process.[1]

The first version of the car featured frenched headlights, custom taillights and bubble skirts. The car was also brought lower to the ground by installing lowering blocks in the rear. Great shop teachers and some old professional helped Carl develop his skills early on. Working with Chuck Kimball after school in Art Bowden's upholstery shop, Carl also learned the art of fine trim work. By 1958 the car had been fit with a 1951 Oldsmobile one-piece windshield, 1955 Chevrolet taillights, frenched 1953 Ford headlights, a 1952 Pontiac front bumper and a molded 1953 Chevrolet grille that carried extra teeth. The paint was a deep blue enamel job, Carl's first using a real air compressor. Later on the skirts and lowering blocks were removed to restore room for the tire chains that enabled him to drive the car during the winters as well.[1]

Carl continued to modify the car until it became a full custom. Driving all year round, Carl became victim of several fender benders. Carl used this an an excuse and inspiration to continuously modify the damaged panels. This work was performed with help and guidance from master metal worked Jack Florence. By 1960 the top had been chopped, and canted and tunneled 1958 Lincoln headlights had been grafted onto the front fenders. This version had also been fit with lakes pipes, scoops in the roof, and a scallop paint job. In 1960 the 283 powered Exotic Emperess version of the Chevrolet made its debut at Don Ridler's Detroit event. The car won Best in Show at the event.[1]

In 1961 the Emperess won Best in Show at the Detroit Autorama and the NHRA National Championship Custom Car Show. In 1963 Carl's Chevrolet was featured on the cover of the Car Craft 10 Best Customs book. A personal tragedy prompted Carl to put the car in storage, and it would remain untouched and out of sight for the next 41 years.[1]

In 2004, friends convinced Carl to return the Empress to its former glory. With good help from his friends Pat Keating, Glen Miller, Steve Davidson and Mike Taylor the car underwent a complete restoration. During the restoration, Carl couldn't resist the temptation to make a few changes. Carl personally stitched a new interior and painted the gold scallops and custom-blended, magenta pearl urethane. The paint was computer matched to the original color that Carl mixed in 1962.[1]

The Emperess was shown in bare metal at Carl's annual Louisville show in 2005. In 2006 the restoration was completed.[1]

Please get in touch with us at mail@kustomrama.com if you have additional information or photos to share about Carl Casper's 1951 Chevrolet.