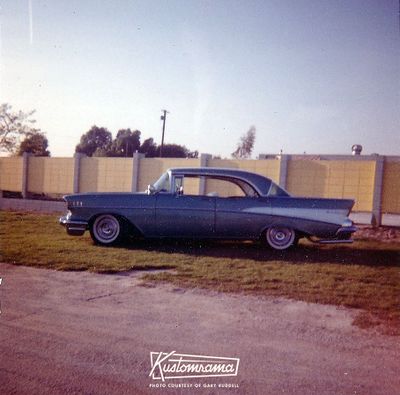 A photo of King's Chevrolet taken at the 1959 Crusaders Car Club Car Show in Long Beach, California. Gary Ruddell remembers that Dick came away with a trophy at the show; "Dick’s car was always spotless. He could take it to a car show any day of the week." Photo courtesy of Gary Ruddell. 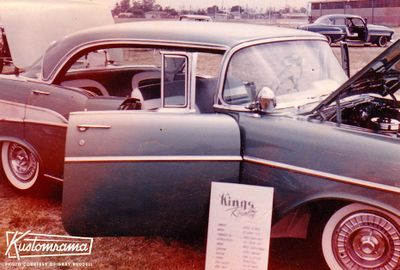 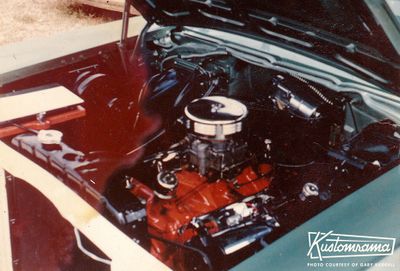 The engine compartment had a lot of chrome work done and a dual ignition installed. Photo courtesy of Gary Ruddell. 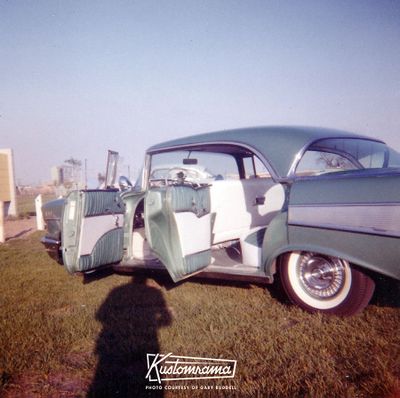 The interior was tuck and rolled in Tijuana to match the paint. Photo courtesy of Gary Ruddell. 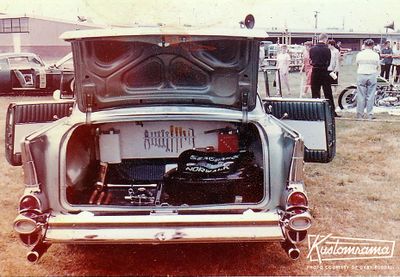 In the trunk of the car, King chromed the jack, and lug wrench. Photo courtesy of Gary Ruddell.

1957 Chevrolet four-door hardtop owned by Dick King of Norwalk, California. In 1958 King was a member of the Seagrams of Norwalk car club. He was driving a 1941 Ford coupe but wanted something newer. In 2018 fellow Seagrams member Gary Ruddell told Sondre Kvipt of Kustomrama that King liked the looks of the 1957 Chevrolet two-door hardtop Bel-Air, "so he started looking for one to buy. After looking at a lot of cars and not finding one that matched his budget or that was in the condition he wanted, he found a yellow four-door hardtop Bel Air that was perfect. In 1958 most guys thought a four-door car was something only their parents drove and didn’t want one. Dick knew with a little work he could make it look good. He started by lowering it in the front and back and then installed a custom exhaust. The yellow paint was changed to metallic green and the wheel wells were painted white. Next, he installed dummy spotlights and modified the taillights with DeSoto lenses. The engine compartment had a lot of chrome work done and a dual ignition installed. In the trunk, he chromed the jack and lug wrench. The interior was tuck and rolled in Tijuana to match the paint. The dash was painted with twenty-one coats of white pearlescent."[1]

Once completed, Dick named his car "Kings Royalty." In 1959 he entered it in the Crusaders Car Club Car Show in Long Beach, and Gary remembers that he came away with a trophy; "Dick’s car was always spotless. He could take it to a car show any day of the week."[1]

In 1963 Dick sold the Chevy to a guy he worked with, and a few months later the car was involved in a fire and was completely destroyed.[1]

Please get in touch with us at mail@kustomrama.com if you have additional information or photos to share about Dick King's 1957 Chevrolet.