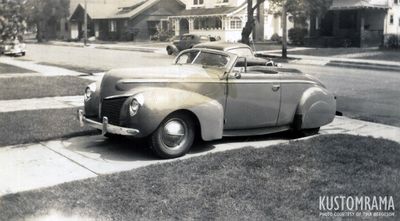 A photo of the Merc taken in Dick's driveway. The top was chopped by Sam Barris sometime between 1945 and 1947. Photo courtesy of Tina Bergeson. 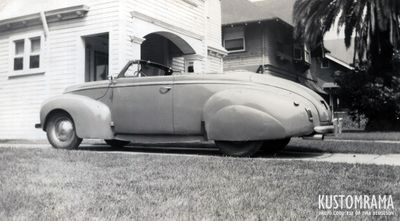 The running boards on the car were removed and replaced with filler panels, and the license plate was recessed into the trunk lid. Two popular tricks at the time. Dual spotlights, fender skirts and Hollywood Flipper hubcaps with blackwall tires wrapped up the style. When this photo was taken, the spotlights were not on. Photo courtesy of Tina Bergeson. 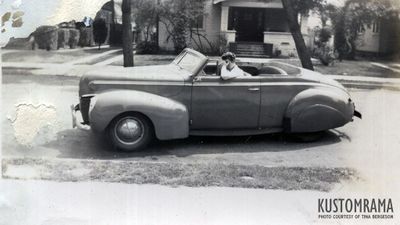 A photo of Dick in the Merc. Photo courtesy of Tina Bergeson. 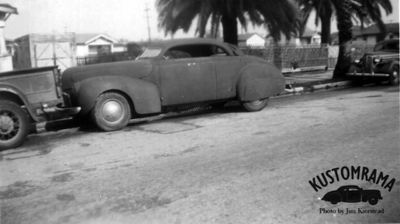 A construction photo of Jim Kierstead's 1939 Mercury taken circa 1946. Jim was a friend of Dick, and he dated Helen, Jim's wife's sister. Photo by Jim Kierstead. 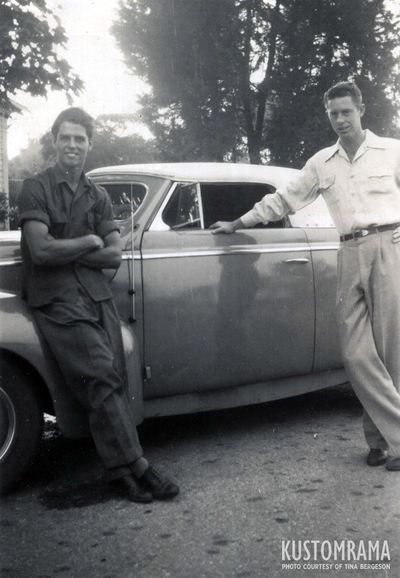 Dick and a buddy with the Merc. This photo was taken after the car had received a padded top by Carson Top Shop. Photo courtesy of Tina Bergeson. 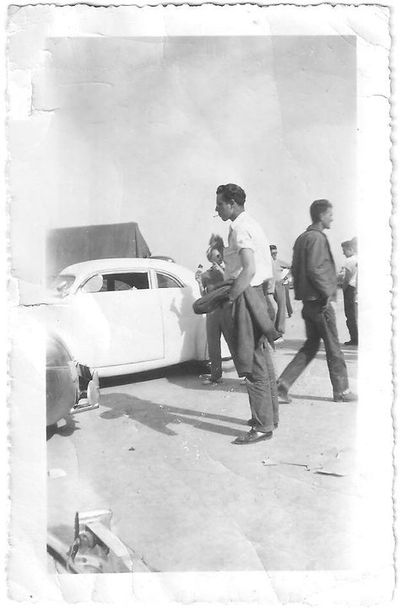 Dick next to Jim Kierstead's 1939 Mercury at El Mirage in 1947. Jim, Dick and Sam Barris drove together as a group to El Mirage that day. Harold Johnson rode with Jim in his Mercury. Photo by Jim Kirstead, provided by Harold Johnson.

Dick's involvement with custom cars goes back to post-war Los Angeles. During WWII, Dick was in the Army, serving his country. He was stationed on Guadalcanal, where he was part of the Battle of Guadalcanal, also known as "Operation Watchtower." After returning from the War, he married his girlfriend Betty Johnson. In 2016 Betty's little brother Harold told Kustomrama that he met Dick for the first time in 1945; "Dick had the Mercury before I met him. It was grey primered at the time." Harold had another sister, named Helen. Helen was dating Jim Kierstead, a young fellow from Inglewood, California. Both Jim and Dick were 22 years old in 1945. Harold was 15. Jim and his brother Robert were friends of Sam Barris, and they both had Mercury's that Sam helped them restyle. Harold met Jim for the first time in 1945 as well, and in 2016 he didn't know if Dick and Jim actually knew each other prior to dating his sisters. Jim and Robert Kierstead became friends with Sam Barris in the Navy. After the war, Jim spent the salary he got from the Navy to buy a used 1939 Mercury coupe. Robert bought a 1941 Mercury convertible. Jim and Sam Barris restyled Jim's Merc in the evenings and during night times from 1945 to 1947. Robert's Mercury was also restyled by the Barris Brothers, and it received a haircut and a padded top.[1]

According to Harold Johnson, it was Sam Barris that chopped the top on Dick's Mercury. The job was done sometime between 1945 and 1947. Before or after the chop, the running boards were also removed and replaced with filler panels. A popular trick at the time. This operation was not done the same way as Jim's Merc, as his running boards were molded to the body. The license plate was recessed into the trunk lid, and it appears in photos that no glass was used. After Sam had done the leadwork and touched up the paint, he brought it to Glen Houser at Carson Top Shop to have a removable top made for it. Dual spotlights, fender skirts and Hollywood Flipper hubcaps with blackwall tires wrapped up the style.[1]

A week after Jim's Mercury had been painted glossy black and was finished up to hit the streets as a completed custom, Jim and Dick planned to go to Reno for a weekend trip. Reno was Vegas of that time. On the evening of Friday, December 5th, 1947, Jim called Dick's house in Redondo Beach, where him and Harold Johnson were waiting. He told them that he was on his way. They waited and waited, but Jim never showed up. Later the same day they received the tragic news that Jim had been T-boned by a Duesenberg going south on Sepulveda and El Segundo Blvd. He was rushed to the hospital, but was pronounced dead on arrival. Dick never had the same spark for custom cars again, and he sold the Mercury shortly thereafter.[1]

Please get in touch with us at mail@kustomrama.com if you have additional information or photos to share about Dick Owens' 1940 Mercury.