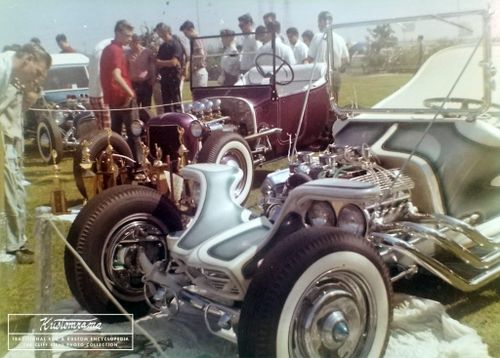 The Kookie T, The Tweedy Pie, and The Excaliber. Three iconic Southern California hot rods. Ed Roth's Excaliber, later known as The Outlaw, made its debut at the show. The interior was not finished, so the car was not judged. Photo from The Cliff Riehl Photo Collection. 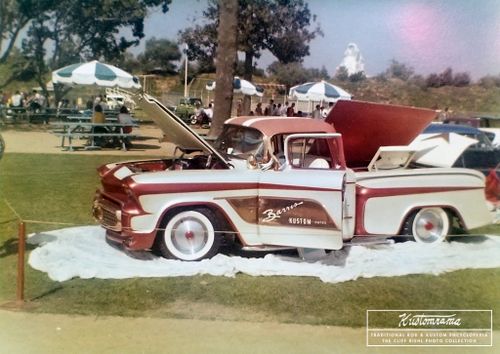 Barris Kustoms brought their Kopper Kart to the show. Bob Holley, worked as the Public Address Announcer that day, and he remembers that he had to tell George Barris over the PA system that if he didn't move his car, a red Cadillac, which he had asked him to do at least twice before, then the club would push it off. The reason was that according to the agreement with Disneyland, they could not have any car motors started or running during the event for safety reasons. Photo from The Cliff Riehl Photo Collection. 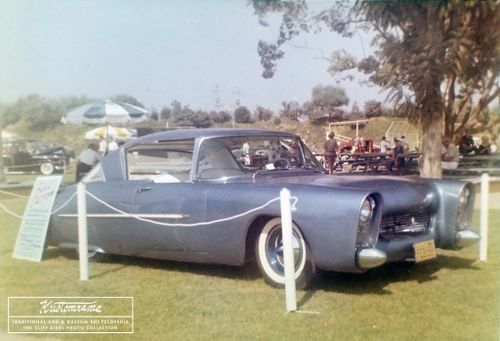 Leo Lyons' Ultra Modern Merc. After 10 years of hard work, the car made its first public debut at the Disneyland Autocade show. It was presented at the show as the "Ultra Modern Merc." Photo from The Cliff Riehl Photo Collection. 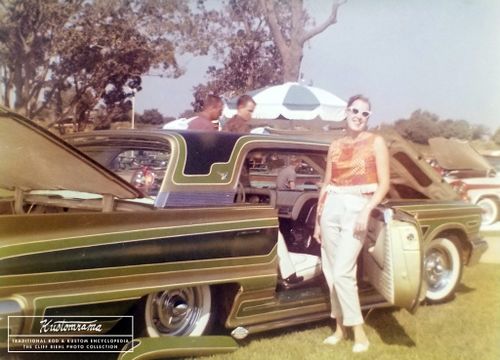 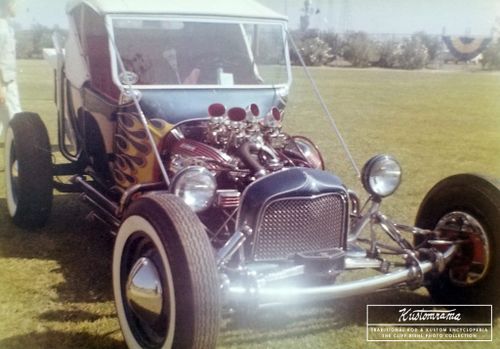 Norm Grabowski's 1922 Ford Model T Roadster. Also known around the world as the Kookie T. Sometime after the show, Norm sold the car to Jim Skonzakes of Dayton, Ohio. Photo from The Cliff Riehl Photo Collection. 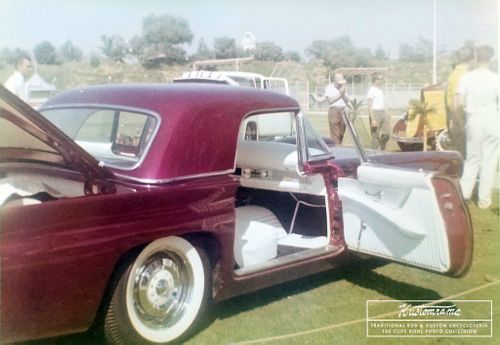 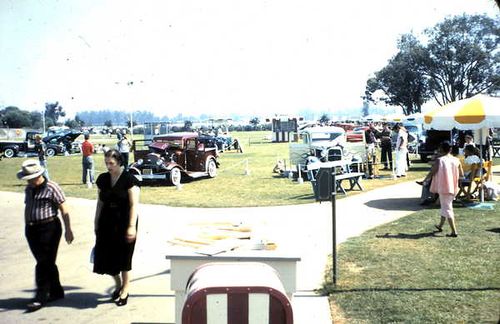 A photo from the Disneyland show 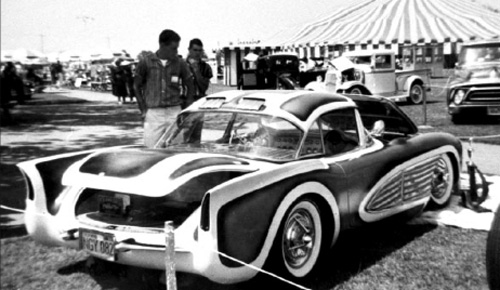 A photo of Ron Aguirre's 1956 Chevrolet Corvette taken at the Disneyland show. 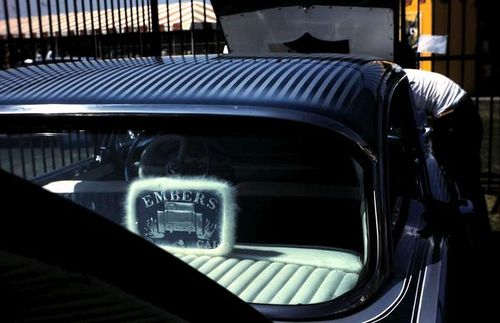 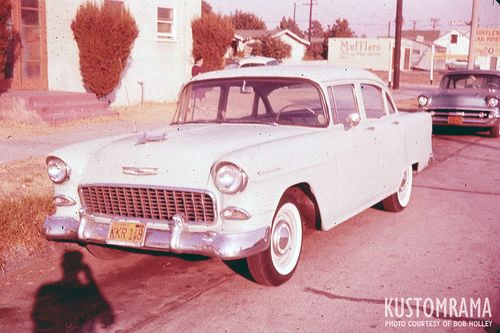 Road Loards member Bob Holley's 1955 Chevrolet 4 door sedan. The car was a "plain jane", but it had a Public Adress system where Bob could tune the radio to a station, and the sound would be heard outside the vehicle; "The Public Address set up was one part, and from inside the car you could talk over it, as well as hear the police calls. The day of the Car Show and Dance at Disneyland, a couple of the others in the Road Lords, drove it around the huge parking lot there, telling everyone about our event, and if they bought tickets from us, they not only got to see all the cars, go to a dance, but they were also good to let you into the main part of Disneyland, so kinda two for one" Bob told Kustomrama in 2016. Photo courtesy of Bob Holley. 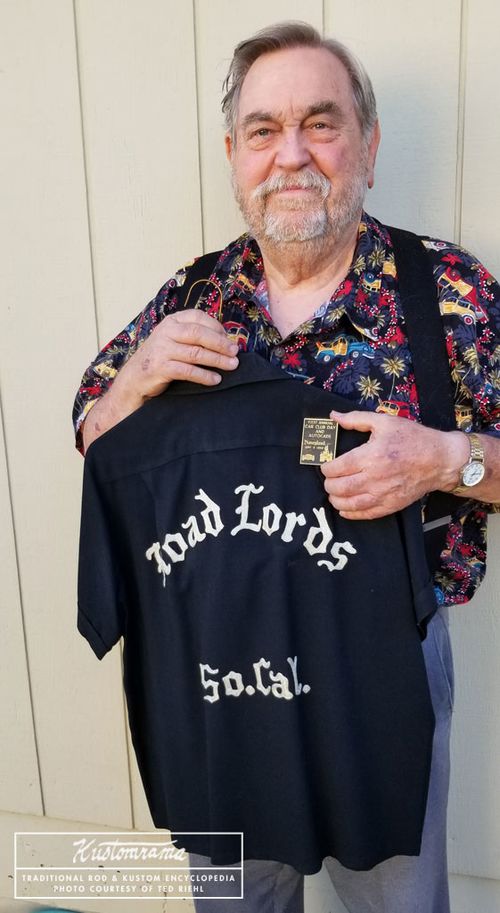 A photo of Cliff Riehl with his old club shirt taken in June of 2020. Cliff is also holding his plaque from the Disneyland show in the photo. Photo courtesy of Ted Riehl. 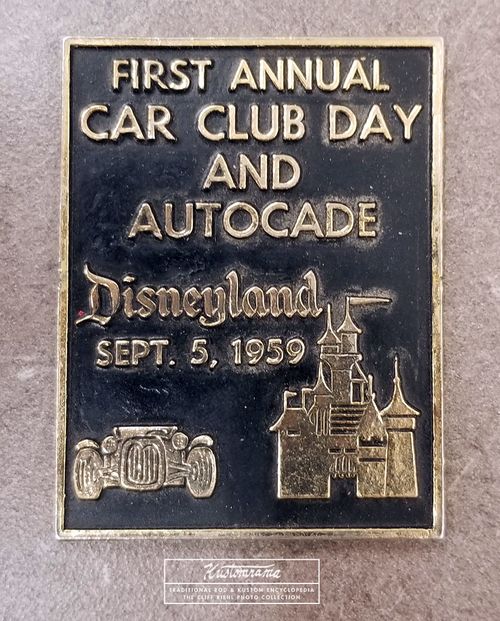 A close up shot of Cliff Riehl's plaque from the first, last, and only Disneyland Car Club Day and Autocade. Photo courtesy of Ted Riehl.

The Disneyland Car Club Day and Autocade was a car show held on September 5, 1959 by the Road Lords of So. Cal. car club. It was a spectacular one-day event that took place at Holidayland in Disneyland in Anaheim, California. The show was promoted as an annual show but was only held once.

The participants of the car show drove their cars down Main Street USA and continued to Holidayland for the show and judging. The show was put together and produced by Marvin Karjala and current Road Lords of So. Cal. president Tom Woolley. At the time the show was held, Disneyland was only about 4 years old, and they were hungry for special events to bring more customers to Disneyland.[2] The Road Lords of So. Cal. was also sanctioned by the Los Angeles Police Department Advisory Council, and Ray James, who was a member of the club at the time, believes that may have helped promote the idea of the car show to Disneyland. The club consisted of about 12 members at the time, and Ray's contribution to the show was to get sponsors for prizes and promote radio advertising[3] Another member, Bob Holley, worked as the Public Address Announcer that day, and he remembers that he had to tell George Barris over the PA system that if he didn't move his car, a red Cadillac, which he had asked him to do at least twice before, then the club would push it off. The reason was that according to the agreement with Disneyland, they could not have any car motors started or running during the event for safety reasons.[4]

Marvin and Tom put their own money up on stake, and bought all of the trophies and plaques with their own money. Marvin's son, Lee Karjala, suspects that the show was not a financial success for his father and his brother-in-law Tom, because they never duplicated it or talked about it after the one-day event. Lee also has a dim memory about the Disney organization may have asked for more money to rent Hollidayland for a show the following year, and that Tom and his father thought it was more work than it was worth.[2] Cliff Riehl was another member of the club. In 2020 Sondre Kvipt of Kustomrama asked Cliff about the show, and he could tell him that the reason there was only one show, was that "Disney took all the money."[5]

Bob Holley left very early from the show the next morning. He was an ambulance driver at the time, working 24 hours shifts, so he wanted to go home and get some rest before going back to work the next day. When Bob left the show, everything was going smoothly, and all cars left the show in a single file as they had agreed to do. At the next club meeting, he heard that there was not going to be another event. The reason for this was that some of the guys that attended the show decided to make a show of leaving the show after Bob had left.[4] Ray James remembers that he was really disappointed that the club would not be going forward and start working on a 1960 show, and he left the club shortly afterward.[3]

Please get in touch with us at mail@kustomrama.com if you have additional information or photos to share about Disneyland Car Club Day and Autocade.