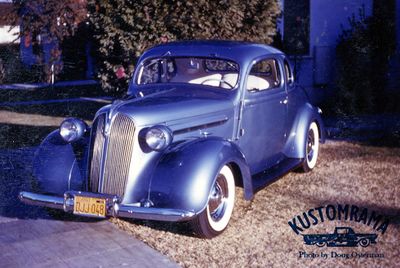 Doug's coupe as it appeared after Flyer's Body Shop had painted in Cadillac Bahama Blue in 1959. Photo courtesy of Doug Osterman.

1937 Plymouth coupe owned by Doug Osterman of San Jose, California. The Plymouth was Doug's first car, and he bought it around January of 1958, from a neighbor that had it parked in his back yard. The coupe was not in a good enough shape to drive, and Doug believes he had to pay $ 50.00 for it. Doug bought the car before he got his driver license, so he spent the next six months visiting junkyards hunting un-dented fenders and a better grille. In fact, any other small parts that he could find that that were in a better shape that what was on the car was purchased. Little by little, the Plymouth started to look much better than the condition it was in at first.[1]

Doug got his first driver's license in June of 1958. By then, the coupe was completely sanded down and masked. He took it to an old Pierce Arrow body shop on Lincoln Avenue in Willow Glen, where he paid the owner $15.00 to try and repair a damaged body panel and paint the car Bahama Blue. The guy's bodywork came out terrible, but the paint looked pretty good. The interior of the Plymouth was upholstered by Kay Seat Covers in downtown San Jose. They did the whole interior in white and blue Naugahyde. Every piece of interior metal trim pieces that could be removed, including the screws, were chrome plated at San Jose Plating. The steering column, floor shift lever, and heater cover were also chromed, as well as all five wheels and bumpers. Doug used a front license bracket from a 1951 Chevrolet to mount the plate to the Plymouth bumper.[1]

One day while looking at some boats at a shop in San Jose, Doug saw a steering wheel in one of them that he thought would look nice in the Plymouth. He bought one of those boat steering wheels, and modified it to fit the Plymouth steering cloumn.[1]

The coupe was lowered by Heinrich's Auto in San Jose. Abe Heinrich stepped the front axle about 4", while 2" blocks were installed to lower the rear. To finish the car off, Doug took it to Flyer's Body Shop in San Jose for a new paint job. Flyer Tabata reworked the entire body of the car to make it perfect before painting it in a Cadillac Bahama Blue again. The build was completed in 1959.[1]

Doug sold the Plymouth to a friend named Bob Cohen in 1961. Bob worked in his family business, Courtesy Tow Service. He kept it for a few years before he sold it off. In 2014 Doug did not know what became of the car after Bob sold it.[1]

Please get in touch with us at mail@kustomrama.com if you have additional information or photos to share about Doug Osterman's 1937 Plymouth.