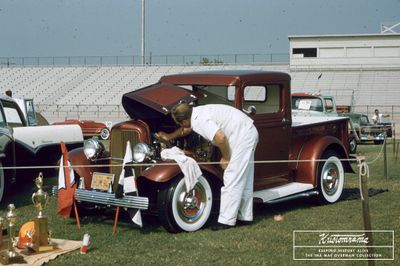 Ed preparing his pick up for the 1957 Norwalk Motorcade show. Photo from The Ina Mae Overman Collection. 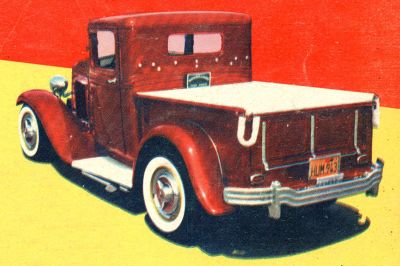 Ed's pickup as it first appeared in 1958 without scallops. This photo is from the cover of Car Craft May 1959. The car was not featured inside the magazine. 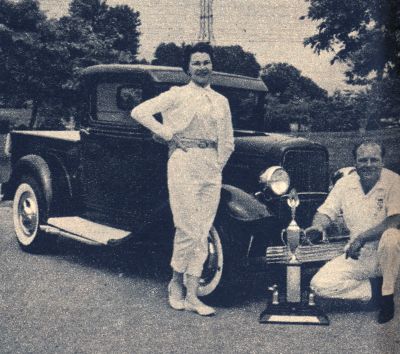 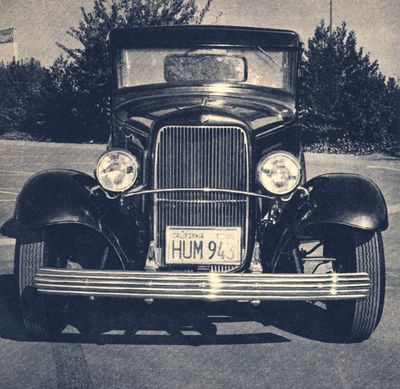 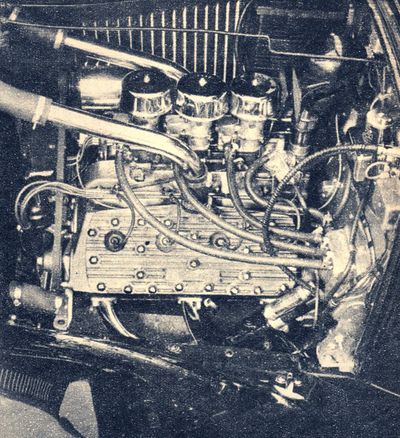 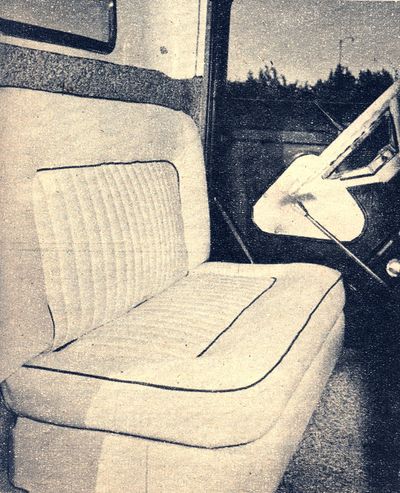 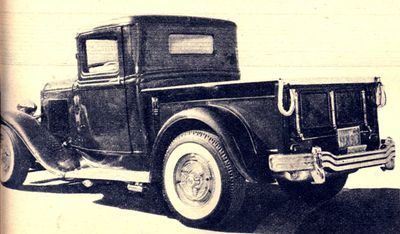 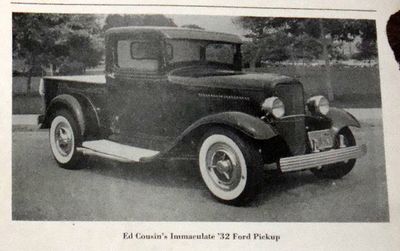 A photo of Ed's pickup from the souvein program of the first annual Santa Ana Rod & Custom Autorama in 1958. 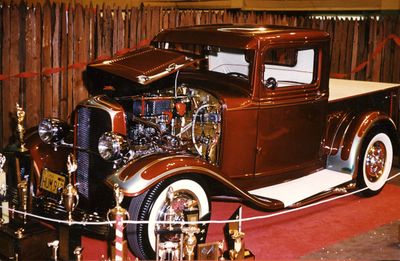 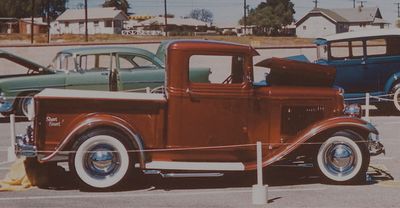 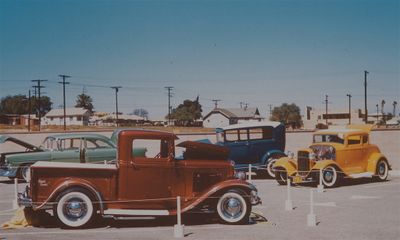 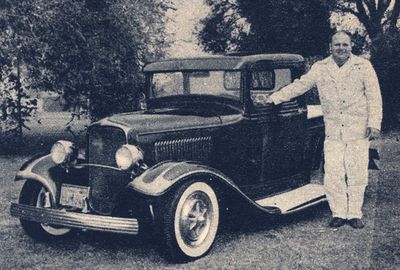 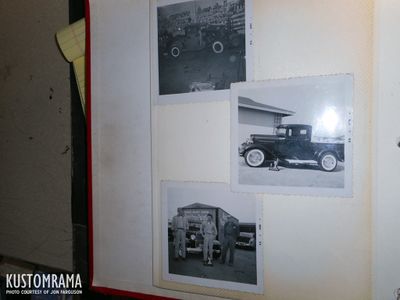 1932 Ford Pickup restyled by Dick's Body Shop[1] for Ed Cousins of the Renegades Car Club of Long Beach, California.[2] The top of the car was chopped 3 inches, and the bed was bobbed 18 inches. 1946 Ford taillights were used in the rear. The headlight bar was dropped and fit with seal beam lights. The shell and cowl were filled, and the original fenders were replaced by passenger car fenders. The front bumper was taken from a 1937 DeSoto, and the rear bumper from a 1949 Plymouth station wagon. The rear bumper had to be cut down to fit the car. A custom gravel pan hided the modified 1948 Mercury gas tank.[1] The undercarriage was chromed and painted. It was fit with juice brakes, and Monroe tube shocks. The stock chassis was lowered 3" up front by installing a dropped axle. The front wheels were a from 1949 Mercury, and the rear wheels from a 1950 Lincoln. [3]

The car was powered by a 289 cubic inches 1948 Mercury engine that was bored, ported and relieved. The engine was also fit with a Potvin cam, converted Zephyer dual coil ignition, 9 1/2 to 1 Evans heads, Evans three jugger, Stromberg 97 carbs, Weber flywheel, and Auburn clutch. The engine was hooked to a 1939 Ford transmission with Zephyr gears.[3]

Once the bodywork was completed the car was painted metallic Titian Red by Dick's Body Shop,[1] and fit with a custom upholstery interior. Cousins re-built the seats himself out of plywood, and covered them in foam and rubber. His wife stitched rolled and peated seat covers in white leatherette with red trim. Nylon material was used to cover floors and to back up seats.[1] Ed installed a 1956 Ford safety steering wheel and 1957 Ford safety belts in the car. The original dash was filled with Stewart-Warner gauges. The running boards were covered with white rubber.[3] In February 1958, Ed's pickup was shown at the ninth annual National Roadster Show in Oakland. At the show, Ed won an award for having the best car in the Rod Pickups class.[4] When the car was featured in Car Craft October 1958 it was painted solid red. Before the first annual Renegades Rod & Custom Motorama the same year, the car had scallops painted on the grille shell and fenders.

Ed's son Sonny went to school with Larry Quatrone. In 1958 Tom Motz, a friend of Larry and Sonny, bought the truck from Ed. Motz drove the truck to school, and he used to give Larry and his girlfriend a lift.[5]

In 1959 Ed's pickup as it appeared without scallops was featured on the cover of Car Craft May 1959. The car was not featured inside the magazine, and it is natural to think that the editors of the magazine has mixed Ed's pickup up with Dick Hoffman's 1931 Ford Model A Pickup that was covered in the magazine as a part of the issues "Pickup Parade".

In 2015 John Lazenby told Kustomrama that in about 1960 or so his dad took him to Birch Ford, in downtown Brea, on the Blvd; "One of the salesmen was Ed Cousins, and his truck was on display there. As a kid who loved cars and especially hot rods and customs, this was about as good as it got." John never forgot that day, Ed or his truck.[6]

Please get in touch with us at mail@kustomrama.com if you have additional information or photos to share about Ed Cousins' 1932 Ford.