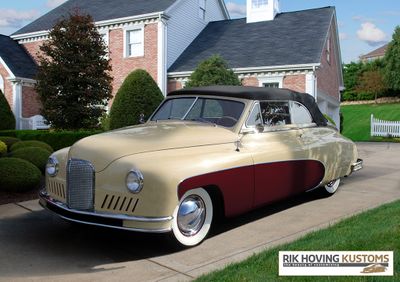 A photo of Frank's Packard that Bill Layman had digitally enhanced and superimposed in his driveway. Photo courtesy of Bill Layman. Digital restyling by Rik Hoving Kustoms. 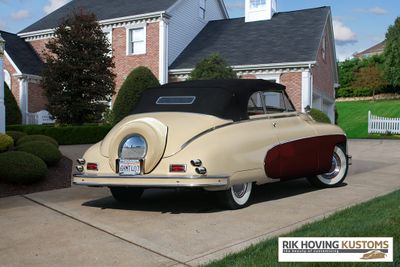 1948 Packard convertible owned by Frank Layman of Pittsburgh, Pennsylvania. The Packard was Franks's personal driver, and he customized it himself in 1953. Up front, the car was modified to accept a cut down 1937 LaSalle grille and louvers from 1935 Ford hood panels. Frank then installed 1950 Ford Crestliner side time, Lincoln push button door buttons, Flipper hubcaps, and a fake continental kit. The hood was shaved. and the front and rear bumper guards were removed before Frank routed functional quad exhaust thru the quarter panels. The interior was done in fake leopard skin, and according to his son Bill, Frank did it himself using his mothers Singer sewing machine. Frank ran a body shop in Pittsburgh named Frank's Garage that specialized in custom car building, and that he did all the work on the Packard using lead. Once the bodywork was done, the car was finished in Cream and Maroon. These were Frank's trademark colors, and he used them on several of his builds.[1]

Frank sold the Packard several years later, prior to accepting a mechanic's position in the US Navy where he had to relocate to the Antarctic.

Bill Layman is currently trying to locate his dad's old custom. If you know what happened to Frank's Packard or have additional info on it, please get in touch with us at mail@kustomrama.com.

Please get in touch with us at mail@kustomrama.com if you have additional information or photos to share about Frank Layman's 1948 Packard.