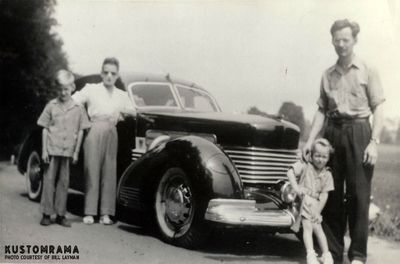 A Layman family photo from 1945. The family is proudly posing next to Bill’s dad’s supercharged 1937 Cord sedan. Bill was 4 years old at the time, and he have a feeling the Cord has something to do with him developing a lifelong relationship with cars. Bill is standing next to his dad in the photo, while his brother Chuck is standing with their mom. Photo courtesy of Bill Layman. 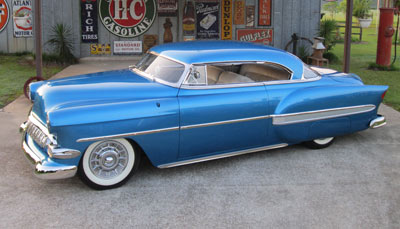 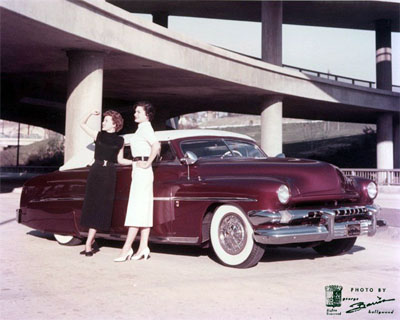 Fred Rowe's 1951 Mercury Convertible, of Los Angeles, California was restyled by Barris Kustoms. The build was completed in 1953. A second version of the Merc, restyled in 1954 was featured in the movie Running Wild along with Bob Hirohata's 1951 Mercury. Bill bought the Merc in 1988, and he had it restored it back to how it appeared in 1954. The restoration was completd in 1989. 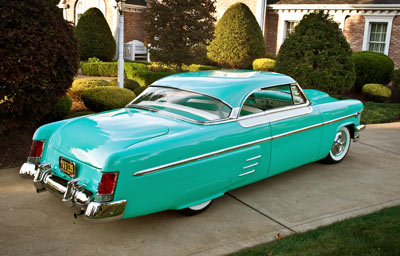 In the 1980s Bill built a 1954 Chevrolet Bel Air that he patterned after Duane Steck's 1954 Chevrolet known as the Monnglow. It wasn't a clone, but rather a tribute build, looking like the first version finished in a bright, almost candy blue paint job almost like the final version. The Moonglow tribute was completed in 1988.[1]

While he was restyling the 1954 Chevrolet, Bill came across an ad in Hemmings Motor News in 1986 for a 1951 Mercury that was supposedly used in Rebel Without a Cause. He bought it unseen, and it turned out to be Fred Rowe's 1951 Mercury Convertible, that appeared in the movie Running Wild along with the Hirohata Merc. Bill completed a frame-off restoration of the Mercury in 1989. After the car had been restored, both the Chevrolet and the Mercury were featured in Rod & Custom February 1991.[1]

Bill decided he wanted to build a new home, so he sold the Mercury in 1992. After moving into the new house Bill was busy running a precision machine shop and refurbishing rare, high end pedal cars. In 2005 Bill decided that he wanted to build another tribute build. As he had fell in love with the Dick Jackson/Ronnie Dragoo 1954 Mercury, he decided to go ahead and build his version of the car.[1]

Please get in touch with us at mail@kustomrama.com if you have additional information or photos to share about Bill Layman.