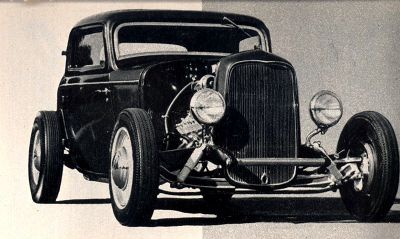 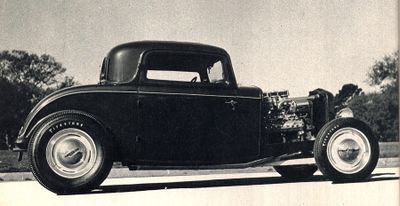 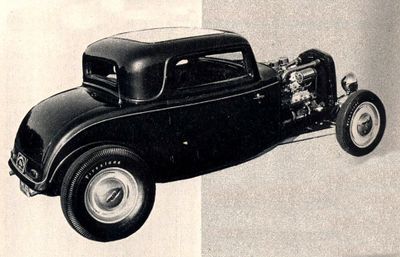 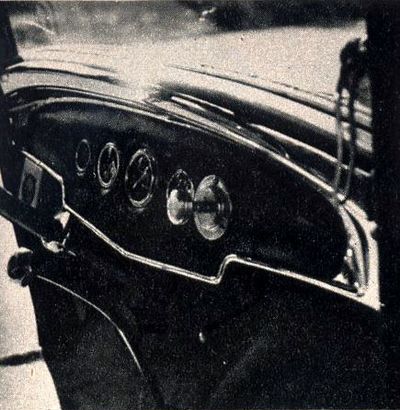 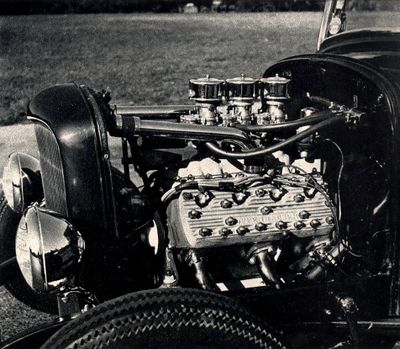 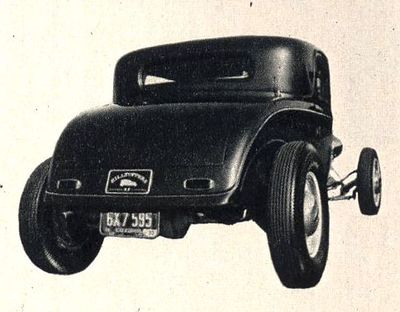 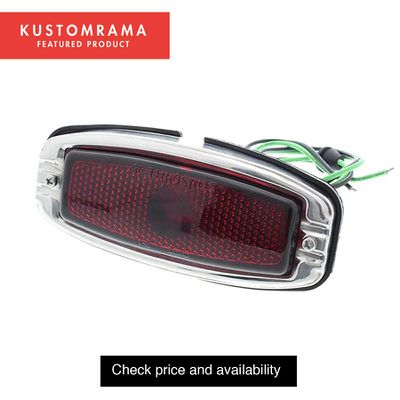 1941-1948 Chevrolet taillights have been popular to use on hot rods since the 1940s. Today, a pair of glass taillights can easily be sourced from your local speed shop or Amazon.com. Click here to check price and availability.

1932 Ford 3-Window Coupe built by San Francisco Hill Toppers members Howard Leever and Fred Esser of San Francisco, California. Building a Hot Rod could turn out to be an expensive matter in the 1950s for many young people. Howard and Fred didn't let this stop them. They joined forces to build their dream car. The body was channeled 7 inches over the frame. The frame rails were boxed from the center crossmember forward to the frame horns. To give it even a lower stance, the top was chopped 3 inches. The air scoop on top of the cowl was filled-in, and the gas tank was mounted inside the deck compartment. The rear frame horns were cut off underneath the body. The car plaque was mounted on the rear deck, flanked on both sides by a set of 1941 Chevrolet taillights. The license plate and light was installed under the rear deck. The interior of the coupe was kept clean and tasteful, done in maroon and white leatherette. The instrument panel was custom made for the car, consisting of oil pressure gauge, tachometer, water temp, ammeter, and a hand pressure pump. A fuel pressure gauge was mounted under the panel between the steering column and the left door. The panel surrounding the instrument panel was covered with leatherette. Motive power for the coupe was a stock 3 3/4 stroke, by 3 5/16 bore V8 with an Iskendrian 1016 cam, Harman & Collins magneto, Offenhauser heads and Offenhauser triple manifold. Fuel is supplied by pressure in the tank, pushing if forward, instead of the normal fuel pump drawing it up by suction. This pressure in the tank, that pushes the fuel forward, is from the hand pump on the dash and from the fuel pump itself. The stock fuel pump is taking air in the inlet side of the pump, forcing it into the fuel tank through the outlet side. This line was intersected by the line from the hand pump on the dash. Because both the hand pump and the fuel pump have one way valves, there is no need to disconnect anything, switch lines, or make special hookups to go racing. To start the car, the hand pump is used to get the proper pressure in the tank and after the engine is running, the fuel pump will maintain about 2 pounds pressure at the carburetor which is adequate for most conditions. A stock fuel pump, pumping in the normal manner, will keep the fuel pressure up to three pounds at the carburetors. Alcohol base fuels require approximately five pounds pressure. Tires were 7.00-16 on the rear and 5.00-16 on the front. Rear shocks are Houdialle and the front were tubular. Finish on the car was purple, with the wheels painted white, to contrast. Chrome on the car has been kept to a minimum both because of the expense involved and because Howard and Fred wanted an outfit that was built for go and not for show. Chrome consisted of Headers, headlights, air cleaners, and water tubes. When the car was featured in Hop Up July 1953, the car had been used for nothing but competition and not driven on the streets, therefore there had been no arguments between the partners about who was to drive the car on which day.[1]

Please get in touch with us at mail@kustomrama.com if you have additional information or photos to share about Howard Leever & Fred Esser's 1932 Ford.