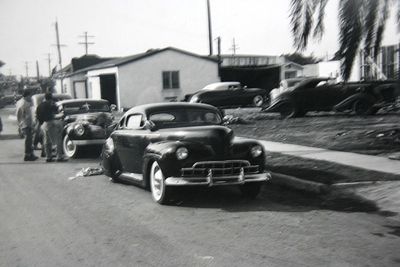 Jesse's Ford as it appeared in the souvenir program from the 1950 National Roadster Show in Oakland. Listed as a 1942 Ford, this version seems to be running flipper hubcaps.

Another photo of the car running flipper hubcaps. 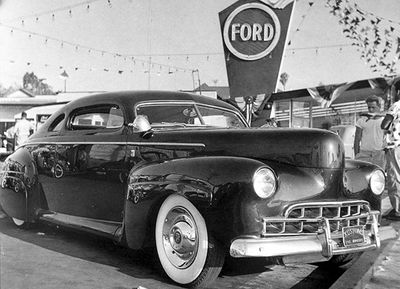 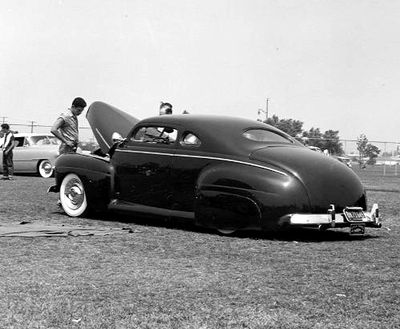 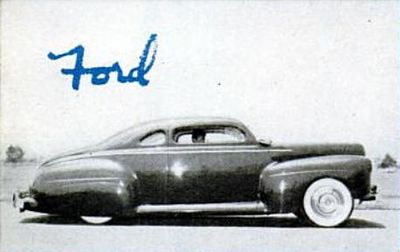 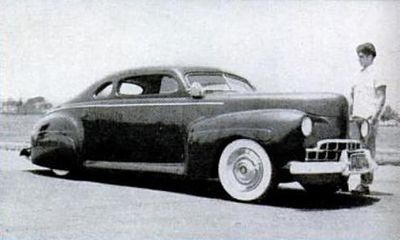 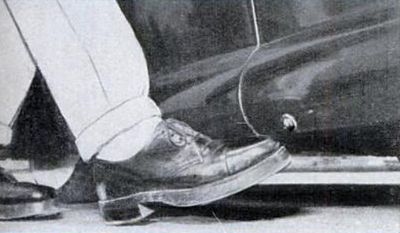 Push buttons to open the doors were hidden in the running boards.

Jesse's Ford as it appeared after Jesse had sold it to Danny Lares. 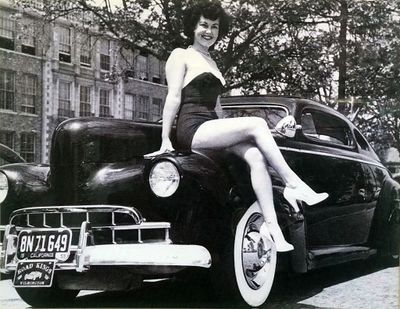 A photo of the coupe running a Road Kings of Wilmington plaque. A friend of Howard Gribble ran into this photo at a restaurant called Hot N Tot on Pacific Coast Highway in Lomita.

1941 Ford Club Coupe restyled by Barris Kustoms for Jesse Lopez of Bell, California. Jesse met George and Sam Barris at the first Hot Rod Exposition held at the National Guard Armory held in Los Angeles, California in 1948. After that Jesse began to hang around the Barris shop.[2] Jesse and Dick Carter were good friends, and after buying a 1941 Ford each in 1948 they drove it to Barris Kustoms for a restyling. Dick Carter's 1941 Ford was less radical, and was finished first.[3] Jesse's coupe was chopped 4 1/2 inches and trim and drip moldings were removed. To get the right line for the top, the rear window was laid down at a much shallower angle. George and Sam molded fenders from a 1946 Ford to the body. Up front the car was modified with a cut down 1948 Cadillac grille, a 1947 Ford bumper, frenched headlights and nosed hood. George Barris tried to patent the Cadillac grille used on the car. The side trim was also shortened in the front. To get the right stance, the body was channeled over the frame. The frame was also kicked up in the rear.

January 19-22, 1950 Jesse's Ford was shown at the National Roadster Show. This early incarnation of the car seems to be running flipper hubcaps. According to the Souvenir Program from the show, the front end was lowered 6 1/2" and the rear end 10". In the rear of the car, hand formed Lucite taillights were fit into the bumper guards of a 1947 Ford rear bumper. The running boards on the car were molded and rounded at the bottom, and push buttons to open the doors were hidden in the running boards. The forest green metallic kustom car featured white walls, twin Appleton 112 spotlights. The souvenir program from the National Roadster Show did also list the car as a 1942 Ford. Sometime after the show, Jesse installed 1949 Cadillac sombrero hubcaps on the car.

Jesse sold the car to Danny Lares of Wilmington, California, a starter at Lions Drag Strip and member of the Road Kings of Wilmington Car Club. Danny sold the coupe in the 1960s for $500 to Stan Crabtree who had an accident with the old custom and wrapped it around a tree.[4]

Please get in touch with us at mail@kustomrama.com if you have additional information or photos to share about Jesse Lopez' 1941 Ford.