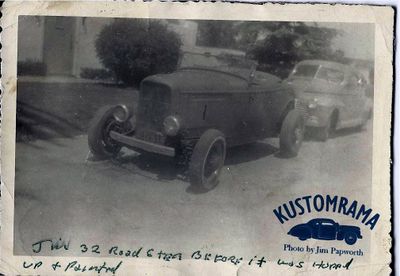 A photo of Jim's '32 roadster. Photo from The Jim Papworth Photo Collection. 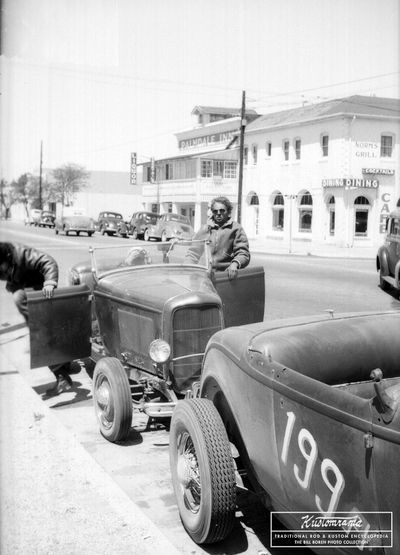 Two 1932 Ford roadsters photographed in front of Palmdale Inn in Palmdale, California. We believe the roadster in the back belonged to fellow Screwdrivers member Jim Papworth. The roadster was Jim’s first car, and he bought it in 1947. He ran it without fenders and running boards. The windshield was chopped, and it featured a shortened front bumper. Photo from The Bill Boren Photo Collection.

1932 Ford highboy roadster owned by Culver City Screwdrivers member Jim Papworth of Culver City, California. Jim joined the club in 1948. The roadster was his first car, and he bought it in 1947. Jim ran it without fenders and running boards. The windshield was chopped, and it featured a shortened front bumper. The cowl lights and door were shaved, and headlights from another car were mounted lower down up in the nose. Jim' eventually sold the car and bought a 1932 Ford 3-Window coupe instead. When Jim bought the car, it was powered by an engine that was later than a 1937 Ford, as it had center head water take offs. The car was in gray primer, and Jim told Kustomrama in 2013 that he did nothing to improve it while he owned it.[1]

Please get in touch with us at mail@kustomrama.com if you have additional information or photos to share about Jim Papworth's 1932 Ford Roadster.