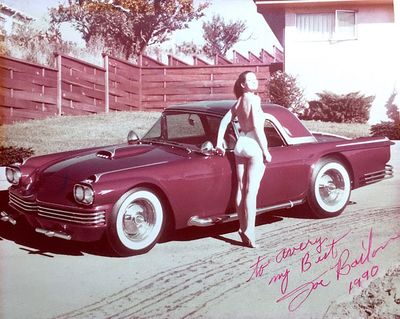 A photo of the CandyBird that hung on Joe Bailon's office wall. This was signed and given to later owner Avery King. Photo courtesy of Kevin Bennett. 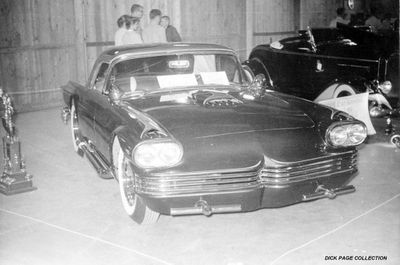 A photo of the CandyBird taken at the 1957 Portland Roadster Show. In 1957 the CandyBird, along with two other Bailon customs were transported via railcar to Portland for the Portland Roadster Show. At the show, it was part of a special exhibit where Joe Bailon had three of his choice "Candy Apple" customs on display. The cars were not listed as being part of the competition cars in the show program. Photo courtesy of Dick Page.

The car was featured as the "Bailon Bird" in Northwest Rods and Sports Cars January-February 1958. 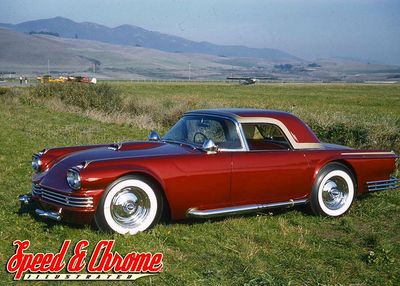 A photo of the CandyBird taken at the Half Moon Bay Airstrip. Photo courtesy of Speed & Chrome Illustrated. 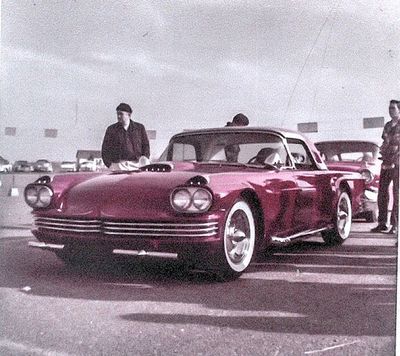 A photo of the Candy Bird believed to be taken at the Little Bonneville Dragstrip in San Jose, California. 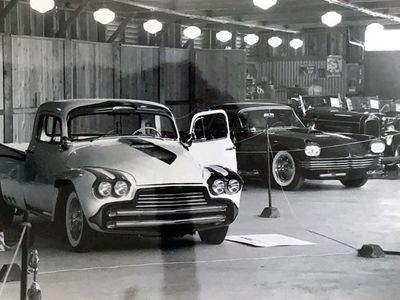 A photo of the CandyBird and the Rod & Custom Dream Truck taken at the 1958 Portland Roadster Show. 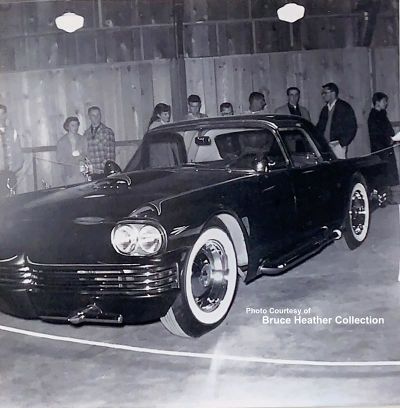 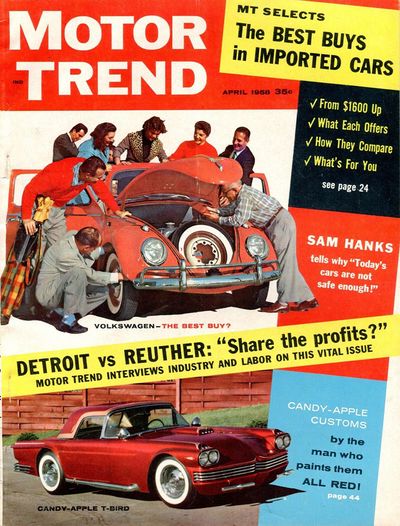 Candy-Apple Customs. The CandyBird made it onto the cover of Motor Trend April 1958. 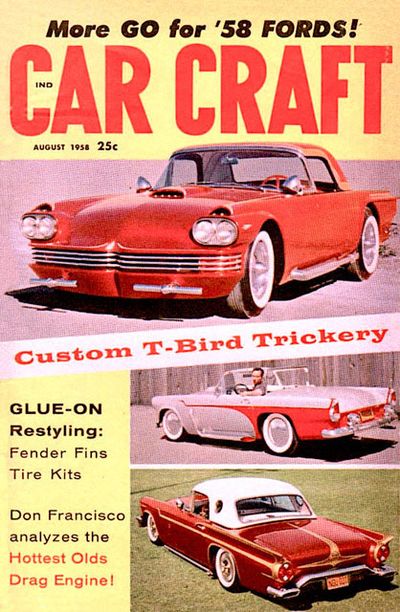 Custom T-Bird Trickery. The CandyBird was also featured on the cover of Car Craft August 1958. 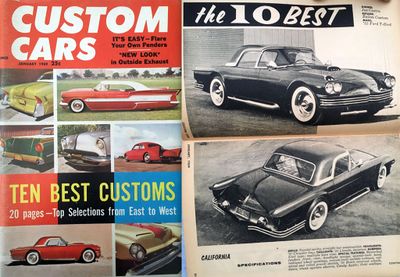 Ten Best Customs! The Candy Bird made it onto Custom Cars Top 10 list in 1959 and it was also featured on the cover of Custom Cars January 1959. 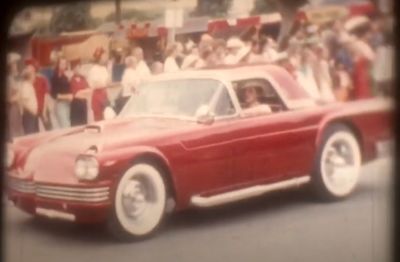 The CandyBird appeared in a short video taken during a parade in Niles, California in the late 1950s. Click here to watch the full video. 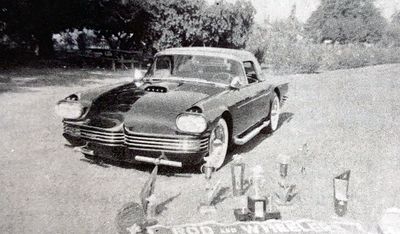 A photo of the CandyBird taken after Jim Augustine had purchased it from Castro. Augustine was a member of the San Jose Rod And Wheelers car club and this photo was taken at the 1959 Napa Custom Car Show. 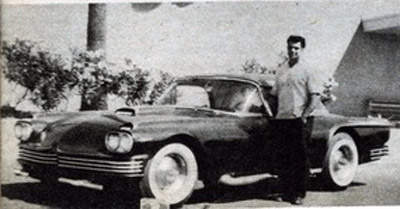 A photo of Jim with the CandyBird taken in 1959. This photo appeared in print in Car Craft January 1960, when the San Jose Rod and Wheelers won the second annual Car Craft Magazine "Car Club of the Yea" award. 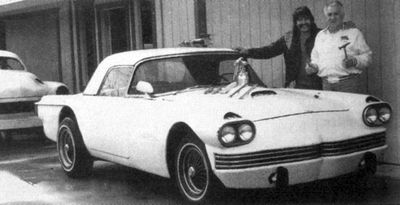 A photo of Joe Bailon with original owner Joe Castro. 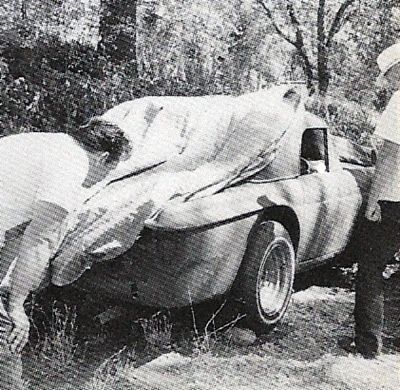 A photo of the CandyBird taken at Joe Bailon's place in the mid 1990s. 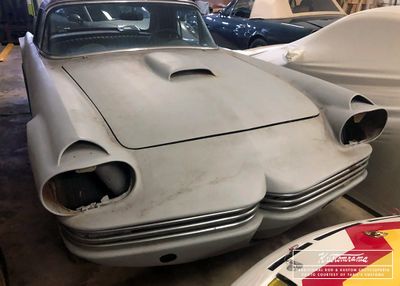 The CandyBird as it sat in 2018. Yaril's Customs, the restorers of Gil Ayala's Wild Bird were contacted by the owners after seeing his restoration and enlisted him to assist in selling the CandyBird. The car was posted for sale via social media in late December 2018. Photo courtesy of Yaril's Customs. 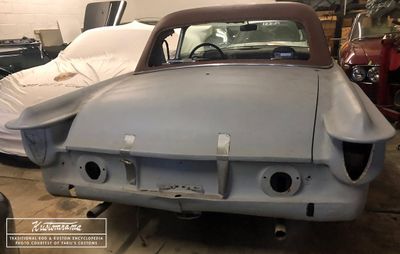 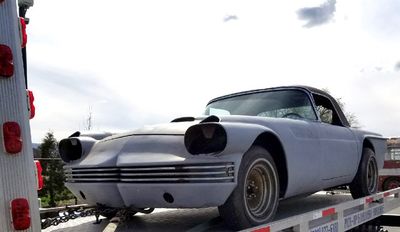 Wes Bennett came across the ad, purchased the car in February 2019, and shipped it back to the West Coast to begin the restoration process. Photo courtesy of Kevin Bennett. 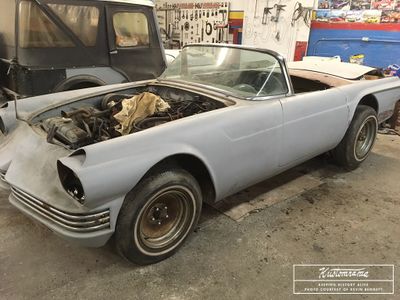 The CandyBird as it sat late in 2020. Photo courtesy of Kevin Bennett. 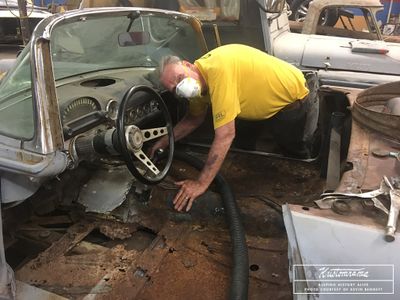 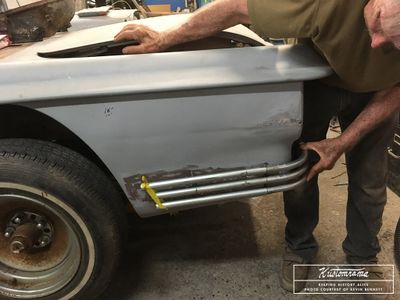 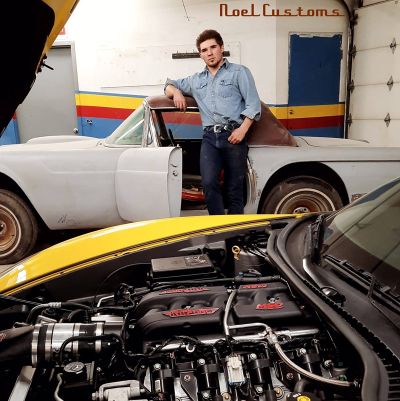 In February of 2021 Noel Customs had begun the process of restoring the old custom. Photo courtesy of Kevin Bennett. 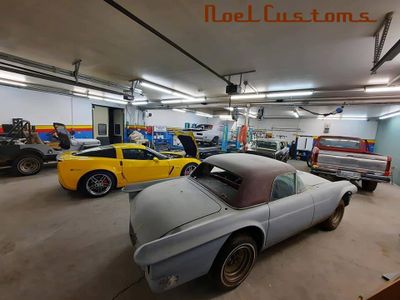 1955 Ford Thunderbird owned by Joe Castro of Hayward, California. Known as "The CandyBird," Castro's Thunderbird was restyled by Joe Bailon at Bailon's Custom Shop in 1957. [1]

At Bailon's shop the single headlamps were replaced with dual units from a 1957 Imperial. The famous Bailon tubing graced the front as a custom grille and as wrap-around rear bumpers. Custom front bumperettes were formed from various tubing sizes and a pointed endcap. The entire nose was formed into a reversed 'bird beak’ V design with a rolled front pan. The hood scoop design was duplicated above the new dual headlamps, and all three scoops were fitted with accent spears inside, donated from the rear fender trim bars of a 1953 Mercury. The doors, hood, and trunk operate electrically with the door handles and trunk all being shaved.[1]

Tubing was also used to form the wheel flares, headlight buckets, and rear quarter panel extensions which housed modified taillights from a 1952-1953 Lincoln oriented upside down. The rear also featured dual exhaust ports exiting the rear body panel above a custom rolled pan. The exhaust ports were fashioned out of bumper guards from a Kaiser Manhattan. The rolled rear pan peaked to a point below the license plate terminating with a custom gold scallop. Non-functional side pipes were made from vintage ford "stepped” driveshafts and dressed up with the signature Bailon polished brass gear teeth ornamentation. The front exhaust flange also being in brass. Dual dummy Appleton spotlights were mounted to the lower windshield stainless trim.[1]

Once the bodywork was completed, Castro's Thunderbird was covered with one of Bailon's famous Candy Apple Red paint jobs. The car is believed to be the second car to have been painted Candy Apple Red, the first being Jerry Sahagon's 1951 Chevrolet. The candy color was painted over a gold base, and that base color was carried into the scallops, rear body, and roof details. The accents were pinstriped in white and gold by Tommy the Greek.[1]

Inside, the interior was mostly stock except for some additional tuck and roll white on the door panels and flooring for show purposes. A custom steering wheel cover graced the stock wheel with an embroidered lollypop in the center and CandyBird lettering. The rear trunk area was also tuck and roll in white and red, and for shows, it featured a portable TV painted in matching Candy Apple Red and white. The TV was a General Electric model 14S208.[1]

The wheels were 15" chrome reverse with two different hubcap treatments. The earliest version featured a standard ford dog-dish hubcap. These were later changed to 1949-1950 Chevrolet dog-dish caps adorned with 2-1/2" chrome bullet centers. The stance was lowered, and some magazine articles suggested the body being channeled, which is not correct. Standard lowering blocks and cut springs most likely provided the correct ride height.[1]

In 1957 the CandyBird, along with two other Bailon customs were transported via railcar to Portland for the Portland Roadster Show. At the show, it was part of a special exhibit where Joe Bailon had three of his choice "Candy Apple" customs on display. The cars were not listed as being part of the competition cars in the show program.[1]

In 1958 the Candy Bird was entered in the 9th annual National Roadster Show where it won the RHODA in its division. The car tied with Bob McNulty 1955 Chevrolet Corvette "The Shark."[1]

The CandyBird was featured in multiple magazines while Castro owned it, and it appeared in two of the four rare Northwest Rods Magazines.[1]

Sometime early in 1959 the car was sold to San Jose Rod And Wheelers member Jim Augustine. Jim showed the car at the Napa Rod And Custom Show in March of 1959. The program pictures it with the Rod And Wheelers banner and group trophies. Jim was an award-winning hairstylist in Oakland/Union City/Fremont. In 2021 it was unknown when the car was sold by Jim or who it ended up with.[1]

The next known sighting of the CandyBird was at the 1978 Los Angeles Roadster Show, where it can be seen in the back lot with white paint or rubber nerf bars and mag wheels. This was communicated by Pat Ganahl, and the CandyBird is mentioned in Pat's book Lost Hotrods II. The next known owner was Avery King of Greenleaf, Mississippi. Avery bought it in a "deal" with other things and didn't really know what the car was. Avery sent in an inquiry to Rod & Custom Magazine and was able to find out details about the car. Pat Ganahl stated that he received photos of the bird in white from Avery King and that he planned to restore it. Ultimately, he decided that it would be too costly and he didn't really have a keen interest in customs at the time. Avery placed an ad in Hemmings Motor News sometime in 1991 listing the car for sale. The title in Avery's name was signed over to Arthur Howard of Villanova, Pennsylvania in September of 1991. Howard owned it legally until February of 2019.[1]

According to Kevin Bennett, Avery stated that the car was shipped to Joe Bailon in Auburn, California after being purchased by Arthur to be restored. "Not sure of the timing around when the car was actually delivered to Bailon." The CandyBird was at Bailon's in Auburn in 1995, as pictured and mentioned in Custom Rodder's September issue. The CandyBird sat outside Bailons' shop under the trees awaiting restoration for several years, until sometime in 2001. It is believed that the owner had a falling out with Bailon, and had the CandyBird transported back to Pennsylvania. Kustom Cars by Bob Falco in Monroe, New York had plans to restore the car for the owner, but economic conditions never seemed favorable, and the owner kept it in storage until February 2019.[1]

Yaril's Customs, the restorers of Gil Ayala's Wild Bird were contacted by the owners after seeing his restoration and enlisted him to assist in selling the CandyBird. The car was posted for sale via social media in late December 2018. Wes Bennett of Yakima, Washington came across the ad, purchased the car in February 2019, and shipped it back to the West Coast to begin the restoration.[1]

In February of 2021 Noel Customs had begun the process of restoring the old custom for Bennett. Wes and his son Kevin are targeting to have the CandyBird in some form of completion by early August.[1]

Please get in touch with us at mail@kustomrama.com if you have additional information or photos to share about Joe Castro's 1955 Ford.