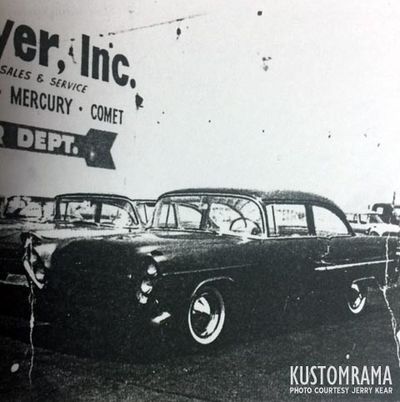 A photo of the Chevrolet taken at Harry L. Mabe's lot in 1961. Harry had a lot at 812 N. Long Beach Blvd. in Compton. In 1992 Harry's son Ed, told later owner Charlie, that his dad mostly had hot rods. Photo courtesy of Jerry Kear. 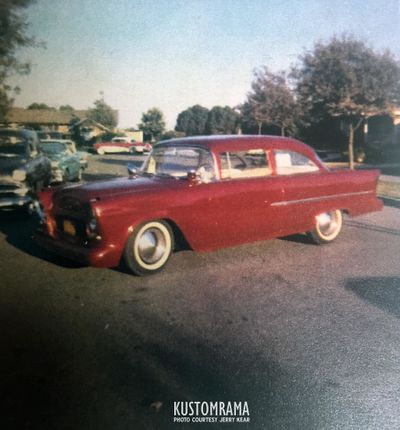 A photo of the 55 taken at Harry's house in Long Beach, California in 1962. Photo courtesy of Jerry Kear. 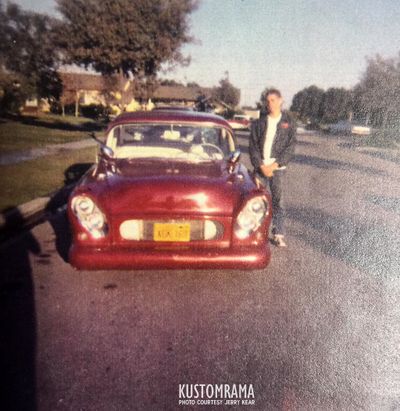 A photo of Ed Mabe with the car in 1962. Ed was 16 years old when this photo was taken. Photo courtesy of Jerry Kear. 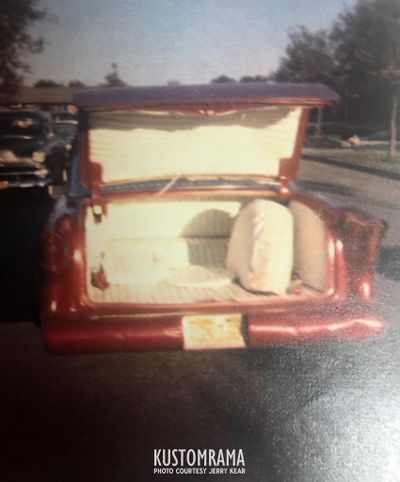 The trunk was fully upholstered in white rolled and pleated material. Photo courtesy of Jerry Kear. 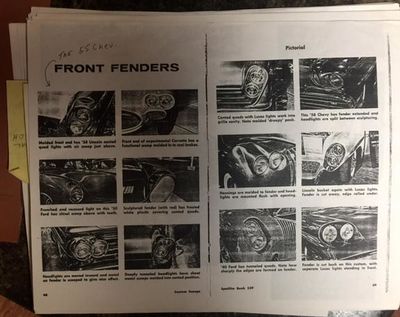 A photo of the headlight treatment on the car appeared in one of the Spotlight Books. 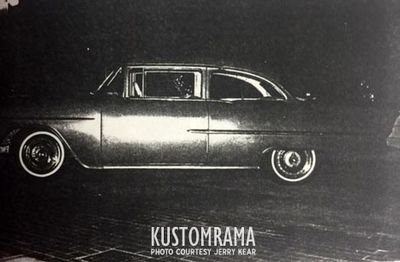 A photo of the 55 taken at Ed Mabe's 20 year High School reunion in 1984. The car was given a brown paint job done that day for the reunion. Photo courtesy of Jerry Kear. 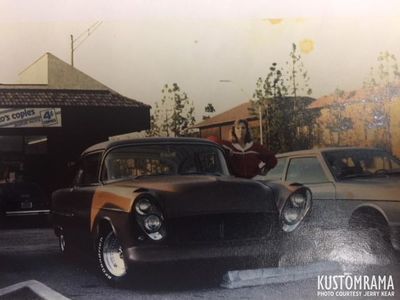 Ed's daughter with the 55 in 1985. New wheels have been installed when this photo was taken. Photo courtesy of Jerry Kear. 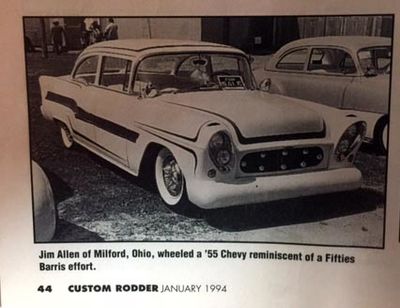 In 1994 a photo of the car appeared in Custom Rodder January 1994. Jim Allen was the current owner. By then the car had been given a scallop paint job similar to Jim Seaton's 1955 Chevrolet. 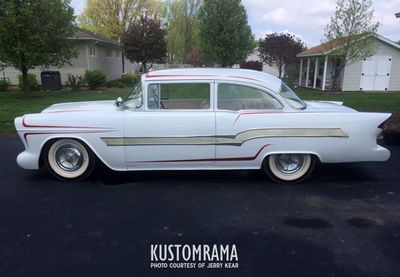 The old custom as it sat in 2016, after Jerry Kear had bought it from Mike Rader's widow. Photo courtesy of Jerry Kear. 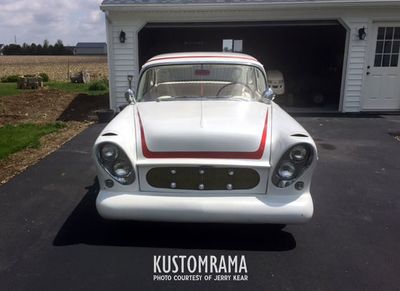 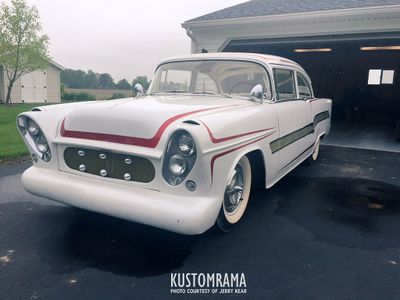 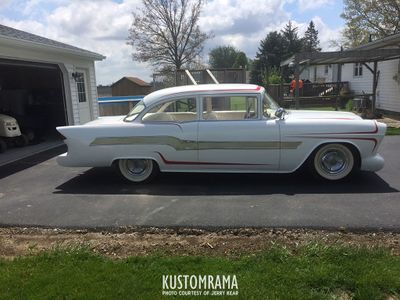 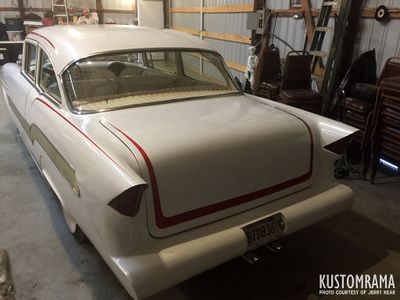 1955 Chevrolet owned by John McLaughlin of Sapulpa, Oklahoma. John is believed to be the original builder of the car.[1]

According to Ed Mabe, the son of the second owner, John sent the car on a train from Oklahoma to Barris Kustoms in California to have they finish the build and paint it. Modifications on the car included dual canted headlights from a 1958 Lincoln and a modified grille opening. Scoops were incorporated above the headlights, and the front and rear bumpers were molded in. The rear of the car featured 1956 Packard taillights. It was nosed, decked and shaved for door handles. The interior and trunk were upholstered in white rolled and pleated material. Dual dummy spotlights, 1957 Plymouth hubcaps, and a Candy Red paint job, supposedly laid by George Barris himself, finished off the build.[1]

In January of 1961 John sold the car to Harry L. Mabe of Long Beach, California. Harry had a lot at 812 N. Long Beach Blvd. in Compton. In 1992 Harry's son Ed, told later owner Charlie, that his dad mostly had hot rods. According to the original bill jacket that was made up 03.14.1962, John was living at 1138 E. Jackson in Sapulpa, Oklahoma. His address in California at the time was a Motel at 805 S. Chester in Compton.[1]

Harry's son Ed eventually took possession of the car. He installed 1965 Buick Riviera hubcaps on reversed chevy wheels on the car before it eventually was put in storage. In 1984 Ed gave the car a brown paint job for his 20-year high school reunion.[1]

In 1992 Ed sold the old custom to a fellow named Charlie. A year later the car had been sold to Jim Allen of Milford, Ohio. And by 1994 it had been painted white with red scallops. The paint job was very similar to the one Barris Kustoms gave Jim Seaton's 1955 Chevrolet. Jim ended up selling the car to Chester Carey of Lima, Ohio. Later on, Mike Rader bought the car from the Chester Carey collection.[1]

In 2014 Mike passed away, and in May of 2016 Jerry Kear of Pandora, Ohio bought the car from Mike's widow. Jerry was getting his 1948 Ford Super Deluxe restored at Parsons Auto Service in Pandora when Mike's widow Sharon stopped by to see if Parsons wanted to buy it; "I started talking to her about it and ended up buying it." When Jerry bought the car it ran a 350 Chevrolet engine.[1]

Jerry has decided to sell the car, and it is currently up for sale. It needs some work but runs and drive pretty good. Jerry is asking $20,000 for the old custom, and he can be reached at kear4of5@gmail.com if you are interested in becoming the new caretaker of the car.

Please get in touch with us at mail@kustomrama.com if you have additional information or photos to share about John McLaughlin's 1955 Chevrolet.