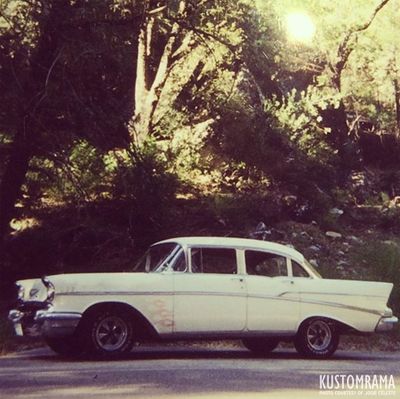 The Chevrolet as it appeared when Josie bought it in 2000. "It looked like hell while we replaced the engine, trans, and generally got it running." Photo courtesy of Josie Celeste. 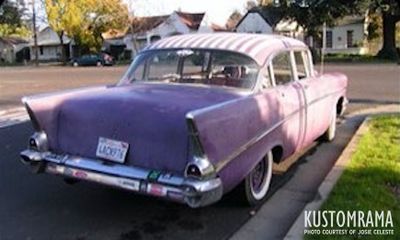 The Purple Satin Version of Josie's Chevrolet as it appeared in 2004. Photo courtesy of Josie Celeste. 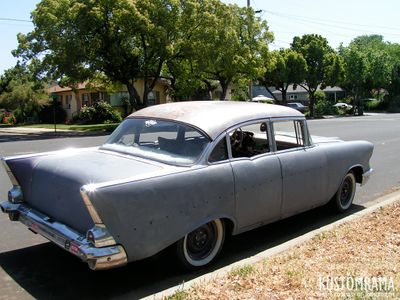 An in-progress photo of the car from 2005, showing it in Grey primer. This version was shaved for door handles. Photo courtesy of Josie Celeste. 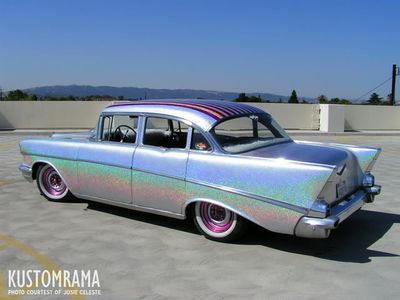 The Silver shifty Metalflaked version of the car as it appeared in 2005. Photo courtesy of Josie Celeste. 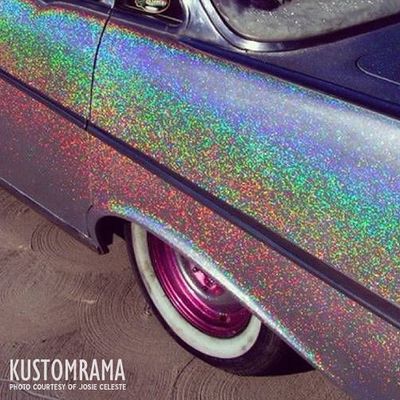 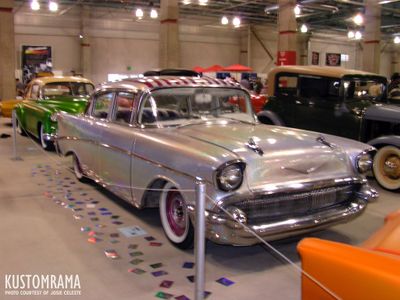 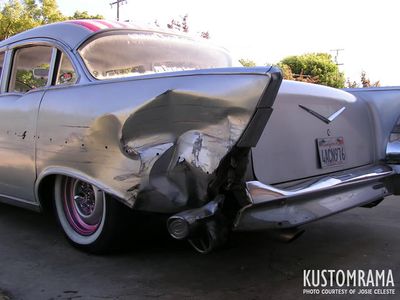 In 2007 the car was hit by a drunk driver. After that it sat for a couple of years before Nic and Josie figured out what they were going to do. Photo courtesy of Josie Celeste. 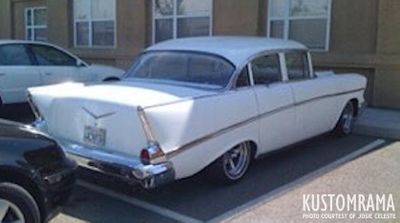 The White and Abalone Metalflake version of the car as it appeared in 2009. Photo courtesy of Josie Celeste. 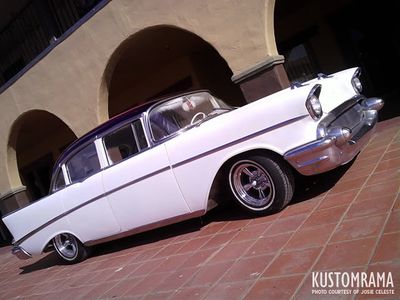 Sometime between 2009 and 2014 the top received a custom Candy paint job consisting of Purple fades and stripes. Photo courtesy of Josie Celeste. 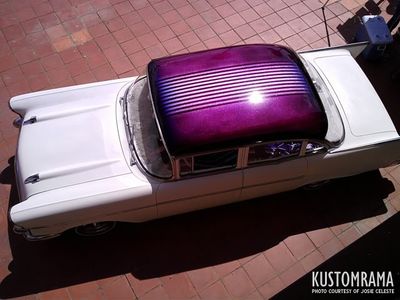 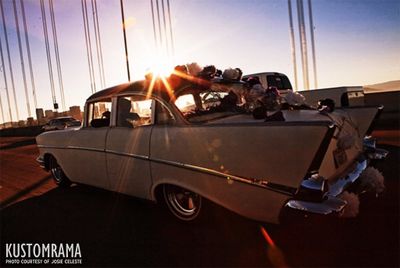 Josie and Nic crossing the bay bridge to San Francisco with the Chevrolet when they got married. Photo by Heather Elizabeth, courtesy of Josie Celeste. 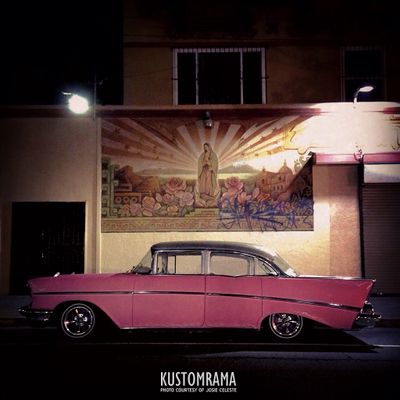 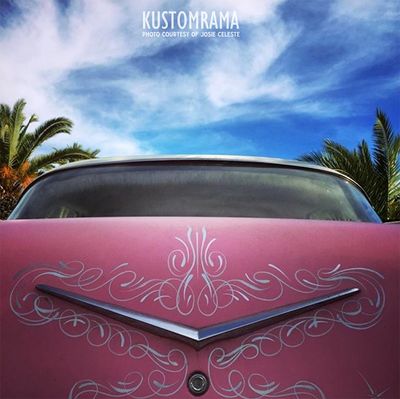 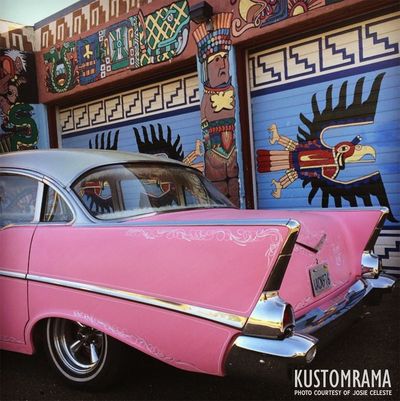 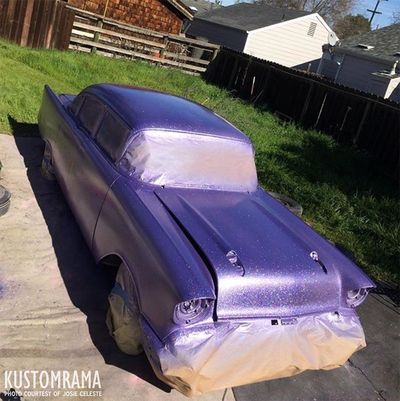 In 2016 it was time for a makeover again. Photo courtesy of Josie Celeste. 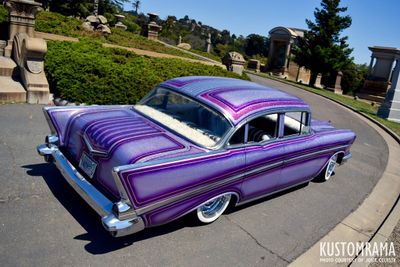 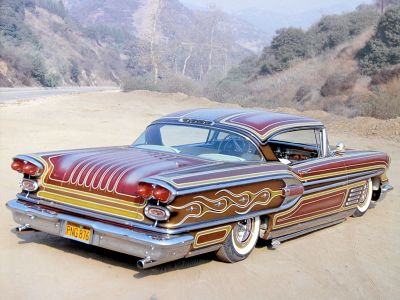 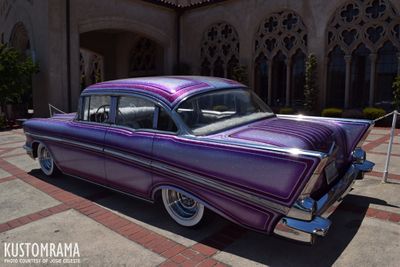 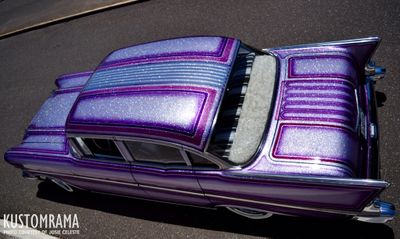 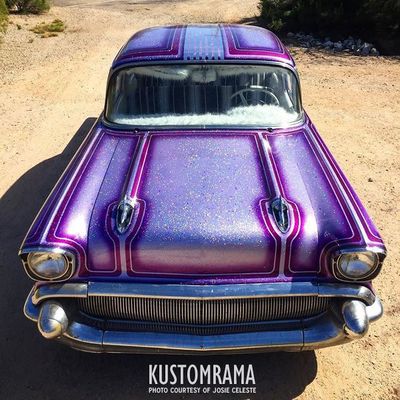 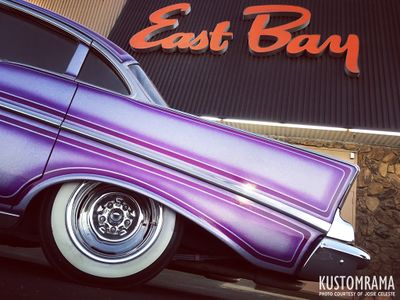 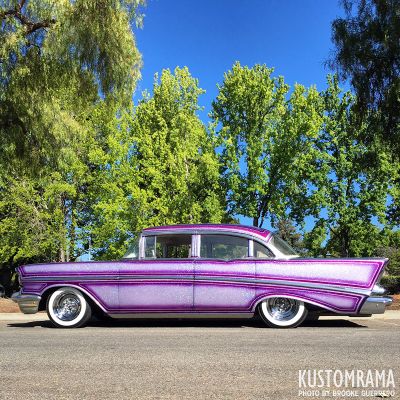 1957 Chevrolet Bel Air owned by Josie Celeste of Oakland, California. Known as "Angel Lust," Josie bought the car in 2000, when she was 16 years old. In 2017 she told Kustomrama that the engine was blown up, and next stop for the car was going to be the crusher; "It was White with a Pink Pearl when I got it. It was a mild custom from the 1970s, and it featured a red crushed velvet diamond tuck interior. The car was showing it's age and then some! The top half of all the paint was completely flaking off, and you could only really tell that there was ever a pearl involved in certain places, like the dash. The interior, cool as it was, was completely destroyed. Cats had been using the package tray as a litter box." According to Josie, the car looked like hell while they replaced the engine, transmission, and generally got it running.[1]

In 2004 a Satin Purple version of the car with stripes on the roof was completed. At the time Josie lived in Livermore. This version featured simplified sidetrim and purple painted steel wheels.[1]

A year later, Josie's husband, Nic, began restyling the car. The old custom was then nosed and shaved for door handles, before it received a 1957 Buick grille. It was also lowered by cutting the coils and installing lowering blocks. Once the bodywork was completed, it received a Silver shifty Metalflake paint job with Purple stripes on the roof.[1]

Hit by a Drunk Driver

In 2007 the car was hit by a drunk driver. After that it sat for two years while Nic and Josie figured out what they were going to do.[1]

After repairing the car, Nic and Josie sanded off all the silver Metalflake and painted the car all White with an Abalone Metalflake top. Completed in 2009, this version ran Astro Supreme wheels. Later on the top received a custom Candy paint job consisting of Purple fades and stripes.[1]

In 2014 Nic painted the car Pink. Named "Angel Lust," the Pink version was also dressed up with heavy White pintstriping by Mario Meza-Murillo.[1]

Please get in touch with us at mail@kustomrama.com if you have additional information or photos to share about Josie Celeste's 1957 Chevrolet.