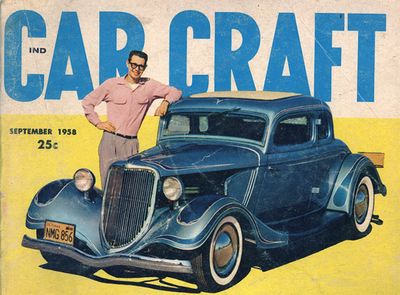 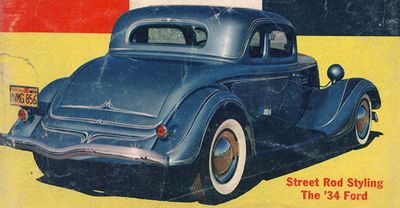 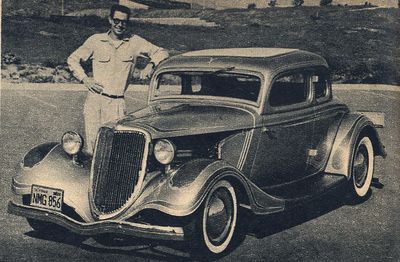 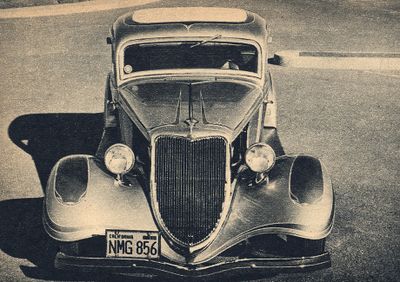 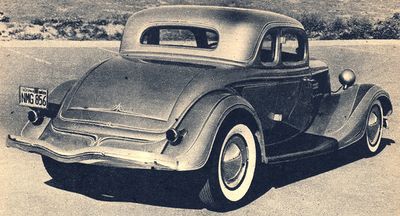 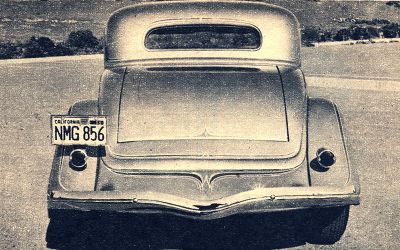 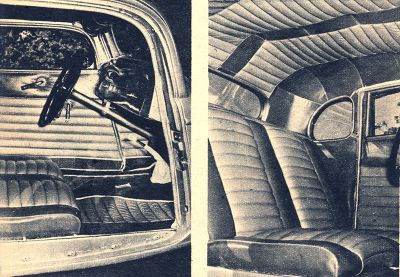 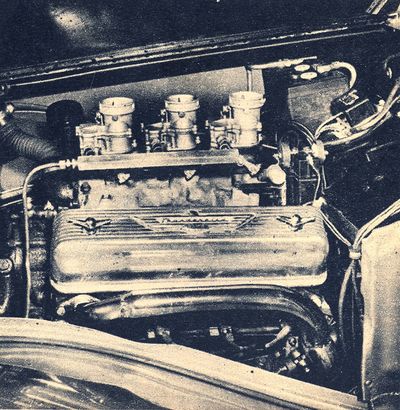 1934 Ford 5W Coupe owned by Ted Svendsen of San Diego, California. The body was sectioned 4" and 3" was chopped out of the top. The sectioning and chopping was performed by Kustom Kraft of San Diego, California. Ted himself rounded the corners of the body where the rear fenders attach. The tips of the fenders and the gravel pan were also shortened an amount equal to the section job. Ted kept the stock taillights, but he modified them by shortening their brackets. A slight rake was obtained through a 3 inch dropped axle up front. Once the bodywork was done, Ted had the car painted in a two-tone blue lacquer with dark on light striping. Inside the door panels, roof lining and the seat was upholstered in two-tone blue rolled and pleated Naugahyde.[1]

The car was powered by a 292" Thunderbird engine running Isky E-2 Cam, Edelbrock pistons and Manifold, Headman "Hedders", Mallory Magspark "fire" and a Mallory distributor. Ted himself did the engine swap.[1]

Walter Andersen lived just a few blocks from Ted in the 1950s and 1960s. He remembers seeing Ted cruising around in the Bay Park area of San Diego. About 1963 - 1964 Ted asked Walter if he would repaint his car. Walter had painted his own Model A Ford Tudor a couple of years before, and Ted liked how it had turned out. Walter was surprised and flattered, and he told him he would do it. Walter had a small one car garage where he painted it. Back then most guys were using lacquer on their cars as it dried fast and mistakes were fairly easy to correct. Ted was tired of the scallops, and he wanted to paint the car a sold medium metallic blue. Walter painted the car "1956 Dodge Royal Blue", a very popular color back then. He hand sanded the whole car before he primered it. When the primer dried, the scallops still showed as raised areas. Walter believes he primered and sanded the car at least three times before the scalloped two tone paint was smooth. Then followed many coats of metallic blue. Walter sanded between each coat, and he believes about seven coats were applied. The last coat was wet sanded for the last time, before he hand buffed it until Ted was happy with the gloss. After the coupe had been repainted, Ted entered it in several local shows, winning several trophies with it. Ted eventually sold the coupe, and he lost track of it after it had been sold about three times.[2]

Please get in touch with us at mail@kustomrama.com if you have additional information or photos to share about Ted Svendsen's 1934 Ford.