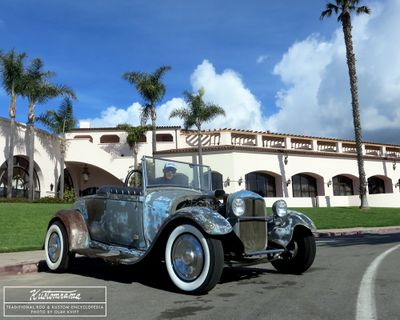 Tom at the 2019 Santa Barbara Drags. Photo by Olav Kvipt. 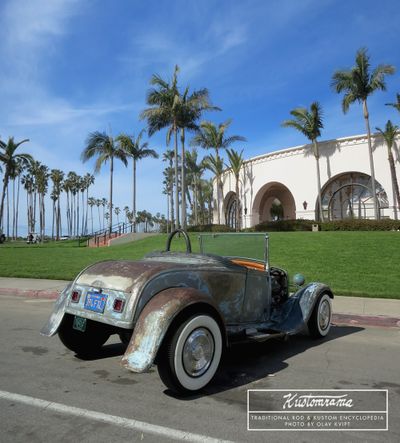 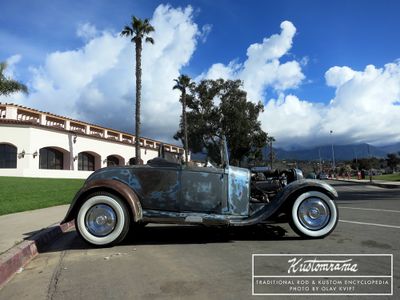 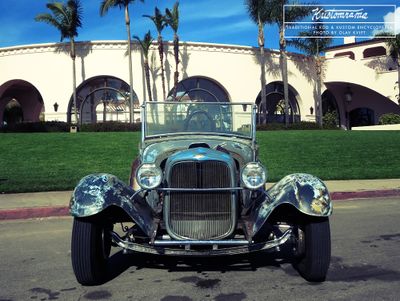 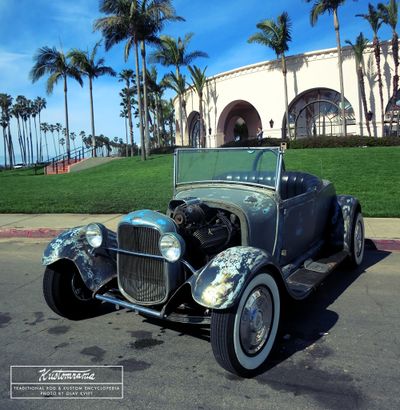 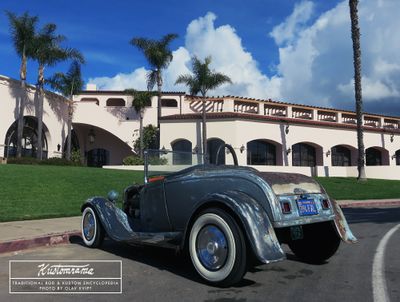 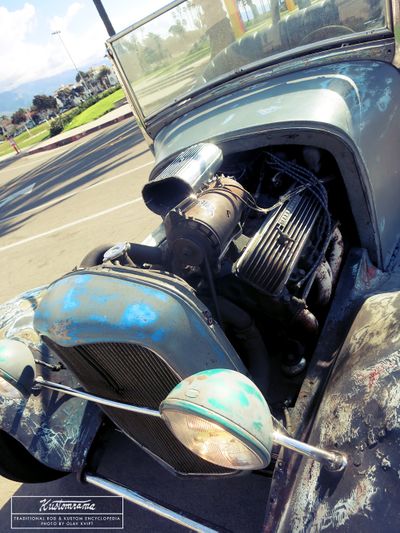 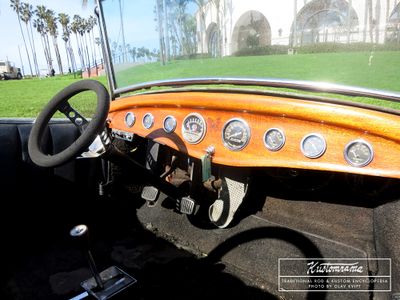 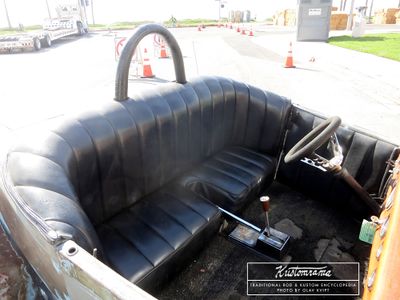 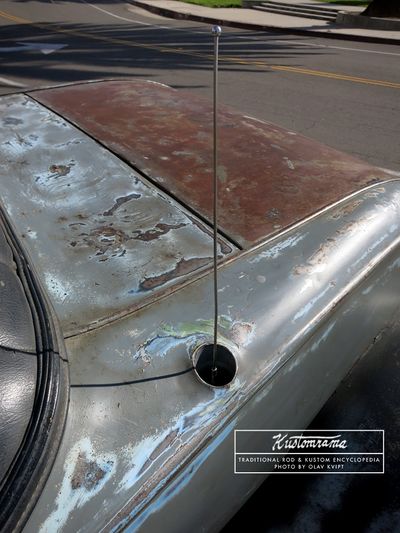 A closeup of the molded antenna. Photo by Olav Kvipt. 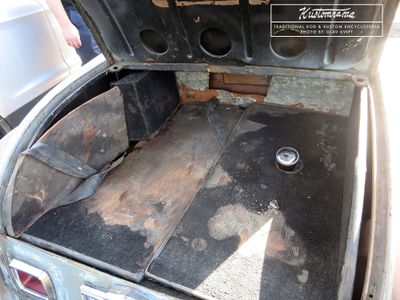 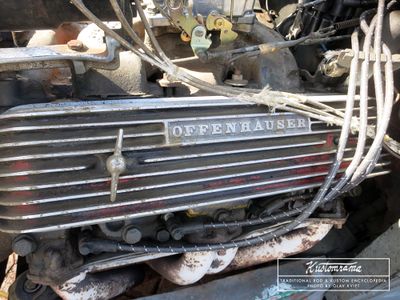 The valve covers used to be painted red with polished fins.Photo by Olav Kvipt. 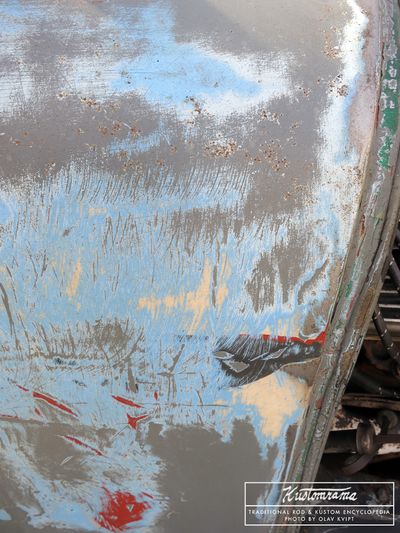 Remains of the light blue. Photo by Olav Kvipt. 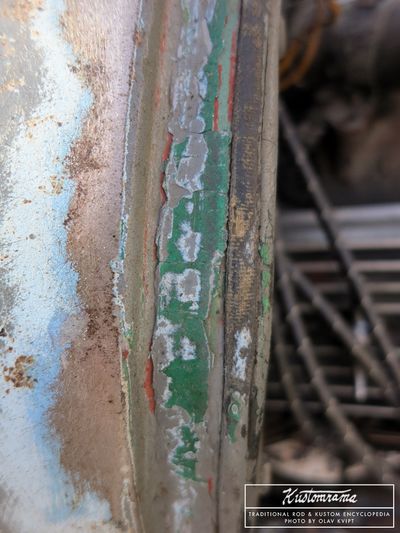 Remains of the green metal flake. Photo by Olav Kvipt. 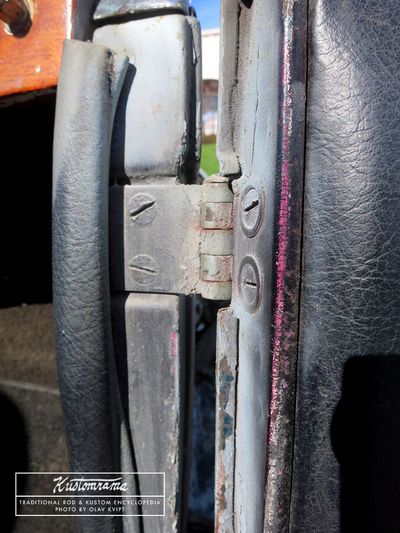 Purple is still visible in the door jambs. Photo by Olav Kvipt. 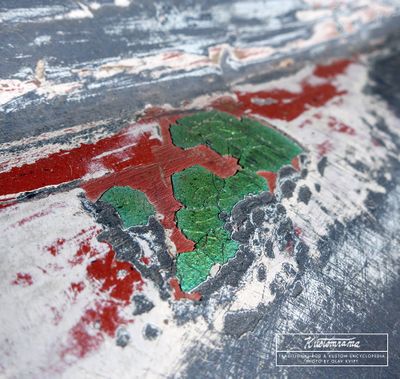 The red orange beneath the green metal flake. Photo by Olav Kvipt. 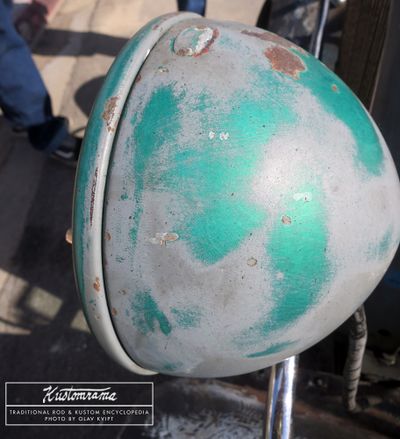 The headlights have a different shade of green. Photo by Olav Kvipt. 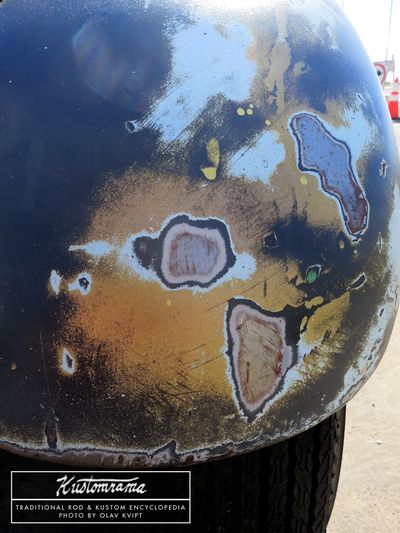 Traces of gold can be found on the fenders. Photo by Olav Kvipt. 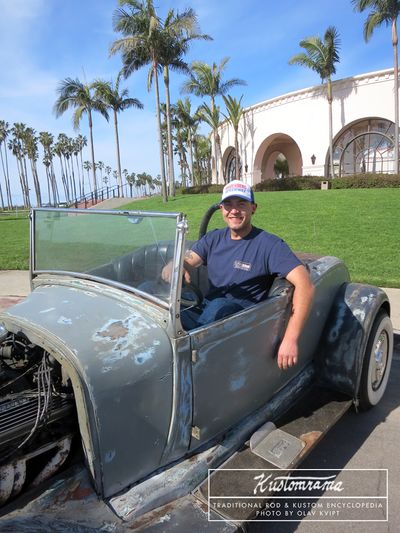 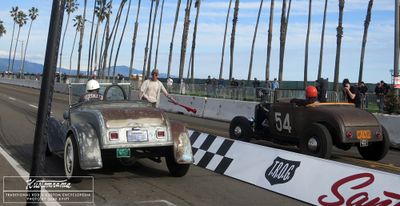 At the drag strip in Santa Barbara. Photo by Olav Kvipt. 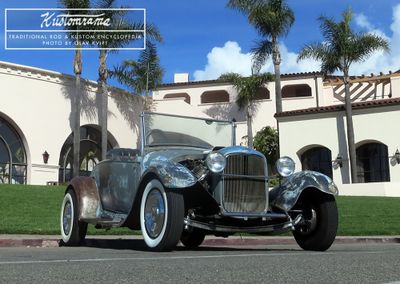 1929 Ford Model A Roadster owned by Spirits member Thomas Dannerbauer of Bayern, Germany. From time to time, Tom works at J G Design & Fabrication in Ventura, California. While his stay in March 2019, Tom found the Model A roadster online for sale. At the time, the car was located in Lodi. A deal was made, and Tom was the lucky new owner of the roadster. When he got hold of the car, the body was channeled 6 inches, and the cowl seams were filled in along with the gas filler. It featured a sectioned 1932 Ford grille, had 1964 Dodge taillights, and a sunken-in molded antenna. The windshield was stock height, and the posts were chromed. The upholstery was done in black naugahyde tuck & roll. The trunk was also fully upholstered, and the carpet was dark green. The running boards were also covered with the same dark green material. The mahogany custom made dash was equipped with Stewart-Warner gauges. A roll bar was mounted behind the driver seat. The steering wheel was a GT unit, measuring 12" A 1956 Oldsmobile engine nestled between the rails, featuring Offenhauser valve covers, chromed oil pan, fan, alternator mount and aftermarket headers. A hydramatic trans was hooked on the engine, however a clutch pedal might tell that a previous setup was installed at one point. The rear end is also a Oldsmobile unit. The chromed front axle had a set of chromed 1942-1948 spindles mounted with chromed backing plates. The wishbones was bent in a quite unusal manner. Previous titles were found under the seat, dating back to 1974 - 1978. The title was in Ralph "Rocky" Reynolds name, of San Pablo. Tom got hold of a friend of Ralph, aka "Rocky". He remembered the car beeing metal flake green. Evidently, the car has been painted several different colors through the years. It was first black, then purple, orange, yellow, blue and green. The sunken-in antenna had traces of blue, so it had to be done before it was painted blue. At some point, someone has applied primer over most of the car.[1]

Getting ready for Santa Barbara Drags

After getting it back to the premises of J G Design & Fabrication, Tom went ahead to make it ready for the Santa Barbara Drags, presented by the The Race of Gentlemen. He got the engine running, which had never been started since 1989. After installing a carburetor and adjusting the timing, it fired straight up. The brake lines were redone, new brakes were installed and new fuel lines were made. The car came with a set of Firestone tires with 1956 Mercury hubcaps attached, and a set of two 13" and two 15" US Mags. Tom decided to go with the whitewalls. Tom also found out the most likely reason why the roadster was put away, it turned out the thirdmember was shot. After spending day and night getting ready for the show, the roadster was up and running, ready to hit the drags![1]

Little of the history is known about the car, however it might be that the car belonged to Richard Howard of San Jose in 1970. Richard had a car that entered in the National Roadster Show 1970. According to the description from the program, it might be the same car as Tom bought. If you know anything about this gem, please let us know.[1]

Please get in touch with us at mail@kustomrama.com if you have additional information or photos to share about Thomas Dannerbauer's 1929 Ford.