Tommy's Studebaker as it looked when it was shown in the program for the 3rd annual Motorama, held November 10 thru 16, 1952. 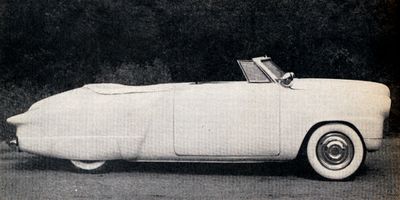 This under construction photo of Tommy's Studebaker, without the front bumper, appeared in Trend Book 105 Restyle Your Car in 1952. Photo courtesy of Eric Rickman. 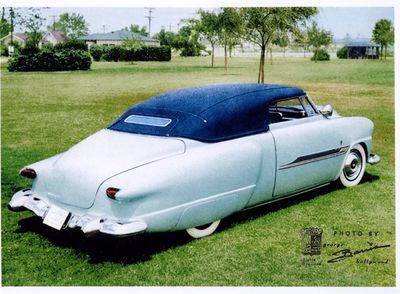 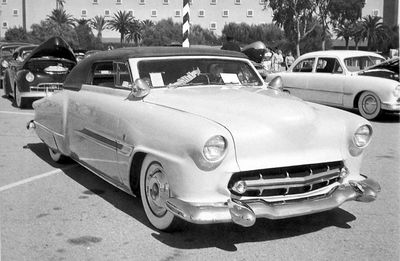 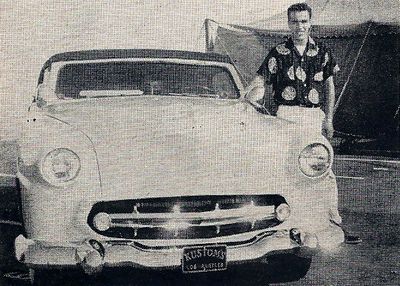 Tommy with the Studebaker.

Tommy's Studebaker as it appeared when it was featured in Photo by Ralph Poole. 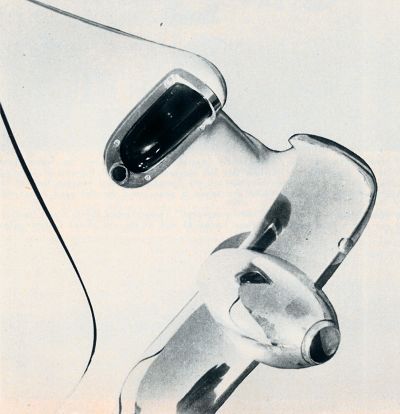 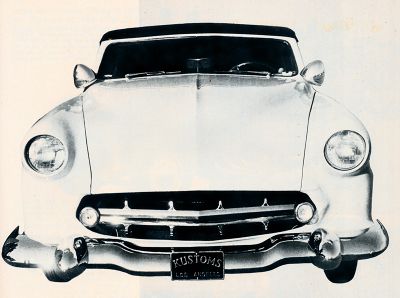 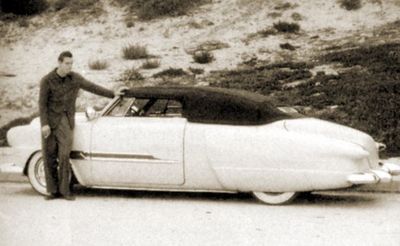 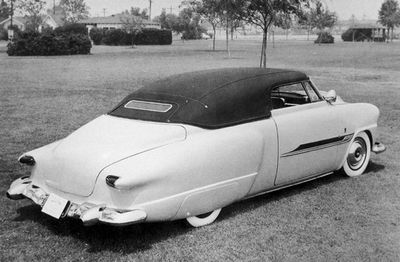 1947 Studebaker restyled by Barris Kustoms for Kustoms of Los Angeles member Tommy Thornburgh of Gardena, California. Tommy's father owned a Studebaker dealership, making the choice of car easy for Tommy.[1] The build was started around 1951-1952, and completed around 1952-1953. The windshield frame and the side windows on the car were chopped four inches. After the chop, a royal blue padded top from Carson Top Shop was added. Up front, shaded headlights were frenched using chrome-lined 1953 Ford rims, with a shade extending two inches forward over the lens. The fenders were constructed to repeat the sweep of the Stude nose. A special grille-bar was made from two 1951 Lincoln grilles mounted back to back. The grille bar featured turn indicators at each. The grille opening was completely hand made. The bumpers on the car were made from 1952 Lincoln grille-bumper units. The stock fresh air inlets for the interior were filled, and a chrome strip from a 1952 Pontiac took their position. The space between the two trim parts were painted dark blue to match the top. The door handles were shaved, and the doors were electrically opened by solenoids.[2]

The taillights on Tommy's Studebaker were made from brass-casted flanges and tubular flares blended into the rear fender panel, 30 inches long and 8 inches wide to form the flare from the fender to the taillight. 1952 Studebaker lenses were used, but in a horizontal position instead of the original vertical position. The rear fenders were welded and molded to the body, and 2 inches was added on the lower edges of the fenders from front to back. Both gravel pans were welded and molded to the body. The exhaust tips on the car were concealed in the rear Lincoln bumper bullets. Once the bodywork was done, Tommy's Studebaker was painted Seafoam blue, which made a quite striking appearance along with the royal blue top and whitewall tires. Dual spotlights were installed along with Cadillac Sombrero type wheel discs and Barris crests. The interior was upholstered in white leatherette, pleated and rolled of course. The instrument panel was kept stock.[2]

November 10 thru 16, 1952 Tommy's Studebaker was shown at the 3rd annual Motorama. In the official program for the show there is a photo of the car without the side trim, and with the stock bumper on. The decklid corners were not rounded either at that time.[3] A photo of the car without the front bumper was published in Trend Book 105 Restyle Your Car in 1952. According to the captions, the "1949 Studebaker" was owned by Tommy Thornberg of Gardena, California.[4]

The completed car was featured in Hop Up March 1953 as the "Stylish Studebaker". The story listed out the the cost of the different modifications the car had received at Barris Kustoms.

Please get in touch with us at mail@kustomrama.com if you have additional information or photos to share about Tommy Thornburgh's 1947 Studebaker.