From Kustomrama
(Redirected from XNR)
Jump to: navigation, search 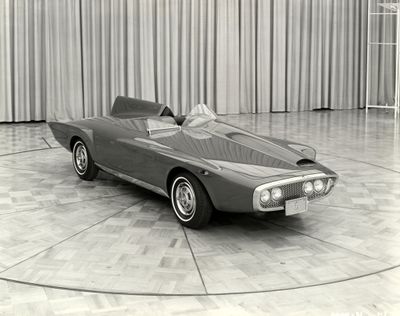 "Never before has the American public seen off-center styling such as that characterizing the Plymouth XNR." This was how the Plymouth-De Soto-Valiant Division introduced their innovative Plymouth badged Corvette-competitor to the public on March 1, 1960. Originally named "Plymouth Asymmetrica," the asymmetrical two-seater roadster was renamed XNR after its designer Virgil Exner during the construction phase. Photo courtesy of the Chrysler Corporation. 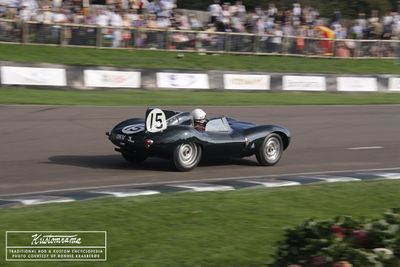 Old race cars served as inspiration for Virgil Exner when he designed the XNR, and in 2013 Virgil Exner Jr. told Ken Gross that his father loved the Jaguar D-Type. Explicitly designed to win the Le Mans 24-hour race, Jaguar produced the D-Type between 1954 and 1957, and as you can see here, it features an enormous asymmetrical fin, similar to the one found on the XNR. The initial sketches for the XNR were done in 1958-59. Photo by Ronnie Krabberød - Right On Magazine. 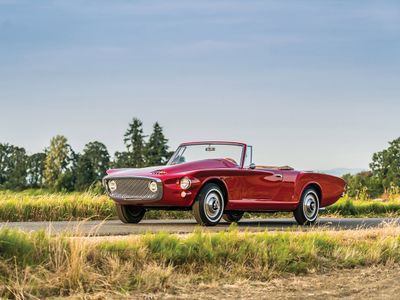 The 1961 Plymouth Asimmetrica was the production version of the XNR showcar. 25 cars were supposedly planned for special clients, but only 2 are believed to actually have been built. Photo by Josh Bryan, courtesy of RM Auctions.

"Never before has the American public seen off-center styling such as that characterizing the Plymouth XNR." This was how the Plymouth-De Soto-Valiant Division introduced their Plymouth badged Corvette-competitor to the public on March 1, 1960. Exner's proposed Corvette-killer, influenced by old race cars, such as the Jaguar D-Type, featured an unusual asymmetrical design. A large off-set hood scoop, concentrated on the driver's side of the car, led to an extended blister fairing that ran down the hood and into the cowl. The fairing was picked up in the headrest, where it flared back into a stabilizer fin that culminated in a bold chrome asymmetric cross. The cross was a striking design made from the intersection of bumper blade and fin. Originally known as the Plymouth Asymmetrica, the car changed name to XNR, after its designer, during the construction phase. Once revealed, the critics thought that the asymmetrical design it employed was purely a gimmick that could have no practical application. Exner disagreed, and according to Chrysler's promo brochure, the XNR introduced Asymmetrical Design; "an entirely fresh element in automotive aerodynamics which may well affect the shape of cars to come."

Please get in touch with us at mail@kustomrama.com if you have additional information or photos to share about Plymouth XNR.