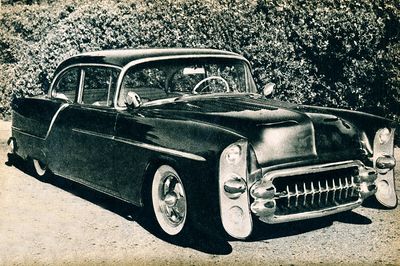 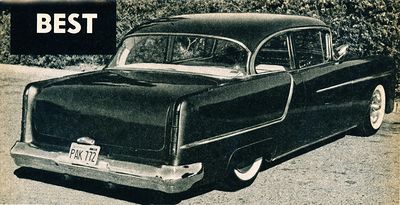 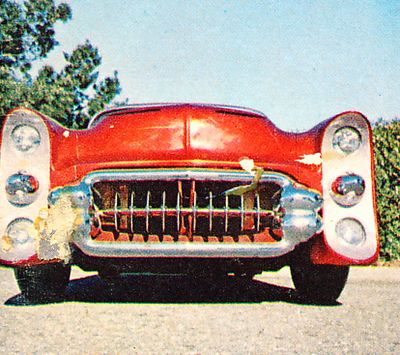 1954 Oldsmobile restyled by Joe Bailon of Bailon Custom Shop in Hayward, California for Bob Merry. The striking feature on Bob's Olds was definitely the front. Bailon reshaped the fenders, extended them 10", and handmade the whole quad headlight assembly. The bullets between the headlights were from a 1955 Buick. The grille was from a Corvette, and was housed within a surround made by dual 1957 Plymouth front bumpers and four 1953 Dodge bumper guards. The hood was shaved, peaked, louvered, and featured two air scoops. The rear fenders were shortened 3", they were also reshaped in order to accept the 1955 Chrysler taillights. The doors and trunk were electrically operated. Joe painted the car Candy Apple red. As a final touch, dual spotlights and chromed reversed wheels were installed.[1]

In 2019 Gordy Brown told Sondre Kvipt of Kustomrama that he remembers that someone in Salt Lake City, Utah owned the car in the 1960s. He also remembers that it was named "The Satellite."[2]

Please get in touch with us at mail@kustomrama.com if you have additional information or photos to share about Bob Merry's 1954 Oldsmobile.