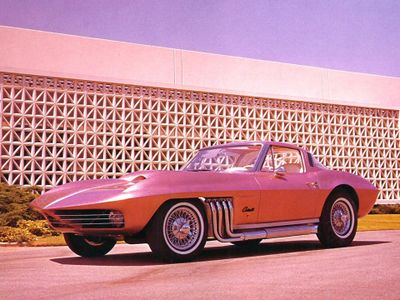 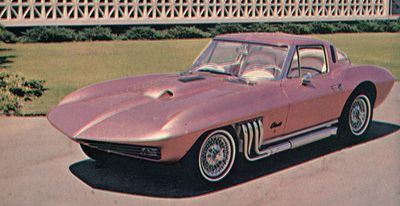 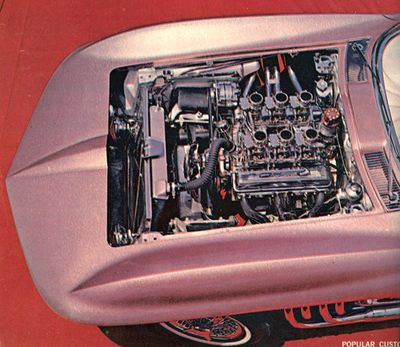 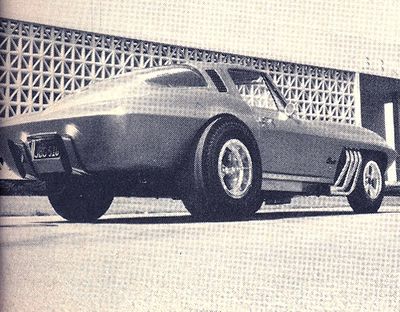 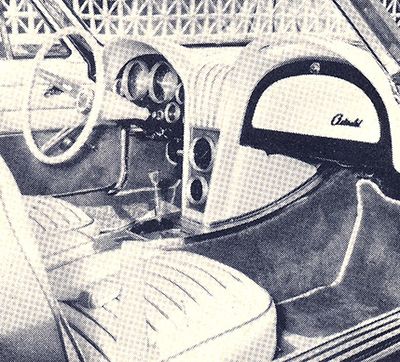 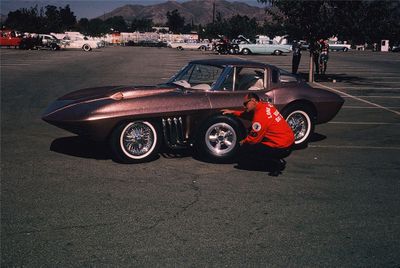 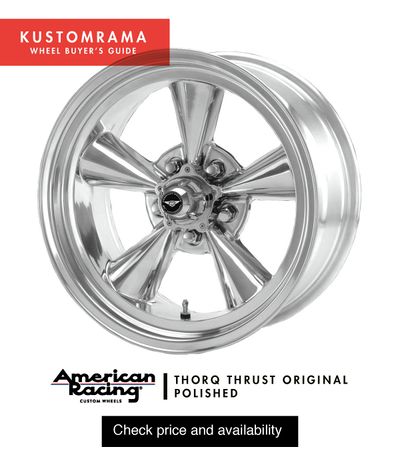 Nordskog ran polished American Racing Torq-Thrust wheels on the Corvette at the strip. These wheels are still in production today, and can easily be ordered through Amazon.com. Today you don' have to spend time polishing the wheels yourself. Keith Christensen recalls American Racing as a wonderful company that had one of the best quality control wheels on the market. "The machining, drilling of lug holes and valve stem holes was held to the highest standards of quality. To own a set of American Racing wheels was indeed a feather in your hat, as they were expensive. People, quite often, would take them out and have them fully polished, a labor-intense process, but then you were "top turkey". Everyone would ooh and aah when they saw those wheels on your car." Check sizes, prices, and availability on these wheels on Amazon.com. 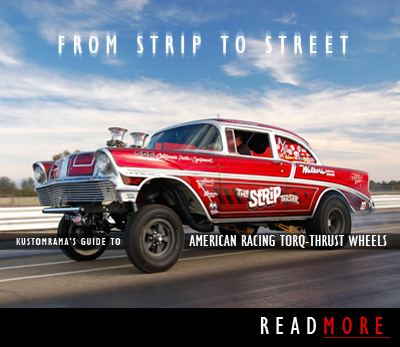 From Strip to Street - Kustomrama's Guide to American Racing Torq-Thrust Wheels. Click here to check it out. 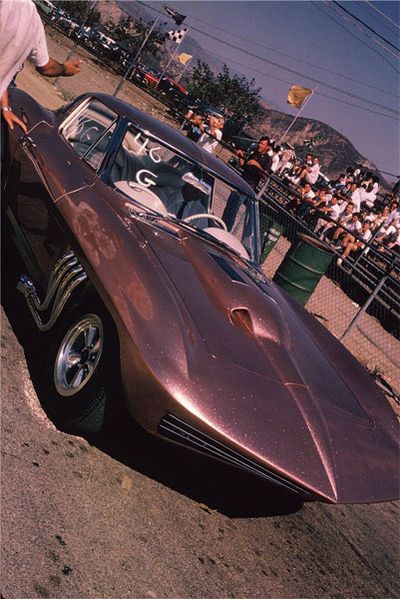 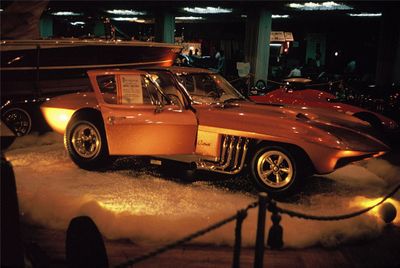 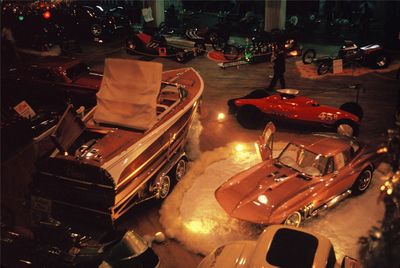 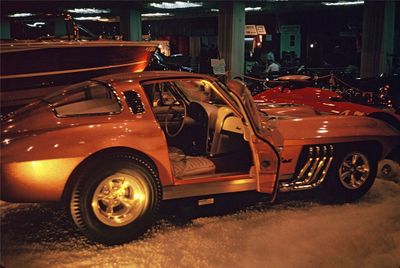 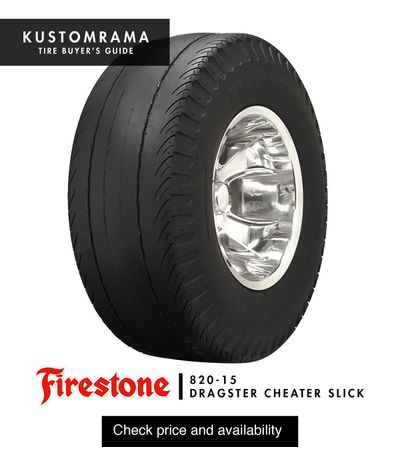 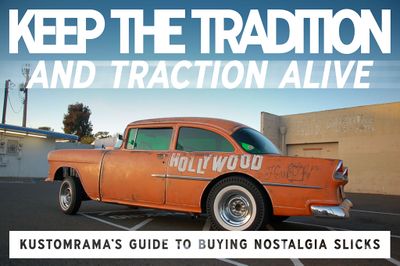 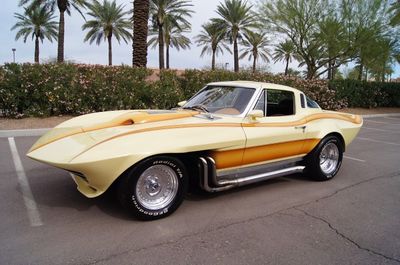 The Asteroid as it sat before it was restored. This version was painted to match one of Bob's race boats. Photo courtesy of the Hemmings Blog. 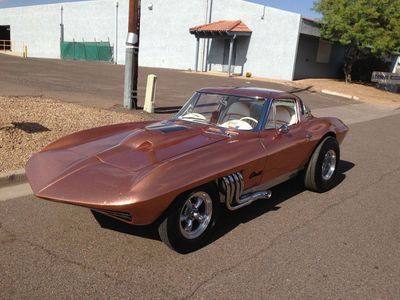 The Asteroid as it appeared after the restoration in 2013. Photo by Leonard Wiggins, courtesy of the Hemmings Blog.

1963 Chevrolet Corvette Stingray restyled by Barris Kustoms for Bob Nordskog. Bob was a mechanical engineer by trade, and he had a past racing at the dry lakes. When Chevrolet introduced the second-generation Corvette for the 1963 model year, Nordskog quickly placed an order for a Stingray sans paint. His intentions all the time was to have George Barris at Barris Kustoms restyle the car.[1] At Barris the nose of the car was extended, and the headlights were placed behind the bladed grille. The original taillights, exhaust outlets, and rear bumpers were given way to a filled rear panel. The taillights were integrated into the nerf bars mounted on either side of the rear license plate housing. Exhaust header pipes emanated from the engine directly aft of the front wheels. The exhaust header pipes were fabricated by Bob Egizi Muffler Shop in Encino, California.[2]

Bob's Corvette was powered by a 352 cid Corvette engine modified with a 505C Iskenderian cam. It was fed through six Stromberg 97 carburetors, producing a measured output of 400 horsepowers. The engine was also bored and stroked by C & T Automotive.[2]

Inside, the car was reupholstered by Don Ferrara of San Pedro, California, Bob's brother in law.[1] The interior consisted of white pearlescent Naugahyde trimmed with metallic copper sheathed in vinyl. Carpeting was frieze of sunset orange. The tonneau behind the seats incorporated dual seat headrests.[2] Bob's Corvette was painted in a copper Metalflake. A paint job that gave the car its name, "Asteroid".[1]

The car was used both on the street and the strip. Dayton wire wheels were used for street only, while American Racing Torq-Thrust wheels were used for drag strip racing. The racing mags ran Blackwall pie crust slicks in the rear.[2] At shows, the car was regularly displayed with one side wearing street wheels and tires, with the other set up for racing. In the 1960s the Asteroid appeared on the cover of Jan and Dean's Drag City LP.[1]

Please get in touch with us at mail@kustomrama.com if you have additional information or photos to share about Bob Nordskog's 1963 Chevrolet.