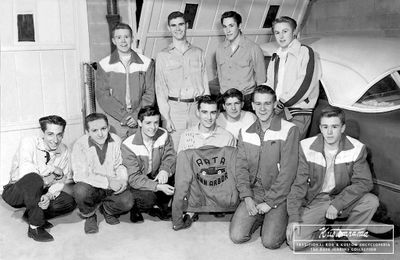 A photo of the members of the Ann Arbor Timing Association taken in 1954. Dave Jenkins, who is kneeling, third from left in the photo, was a founding member of the club. Started by a bunch of high-school kids studying at the University of Michigan in Ann Arbor the guys had a lot of fun, and they were treated like a bunch of rebels. The customized 1949 Ford in the photo belonged to Elwood Peterson, who appears kneeling second from left. According to Fred Thomas, Peterson's Ford was a visual treat with its chopped Carson style top. Photo from The Dave Jenkins Photo Collection. 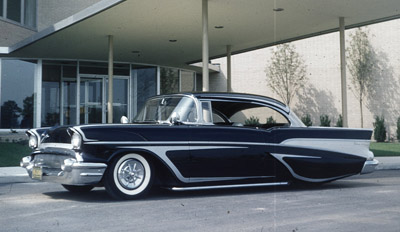 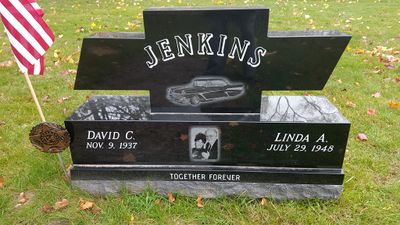 David C. Jenkins (November 9, 1937 - September 26, 2016) was born in Coldwater, Michigan.[1] As a boy Dave loved custom cars, even before he could drive.[2] He was a founding member of the Ann Arbor Timing Association. The club was started by a bunch of high-school kids studying at the University of Michigan in Ann Arbor. According to Dave, the guys had a lot of fun, and they were treated like a bunch of rebels. Later on Dave went on to become a member of Midwest Customs and Kustoms of America.[3]

Dave served in the Army National Guard from 1960-1966. He retired from Michigan Bell Telephone Company and then owned Jenkins Telephone Service.[1]

After a long and painful battle with cancer, Dave passed away at home in Ypsilanti, Michigan September 26, 2016, 79 years old.[4]

Please get in touch with us at mail@kustomrama.com if you have additional information or photos to share about Dave Jenkins.