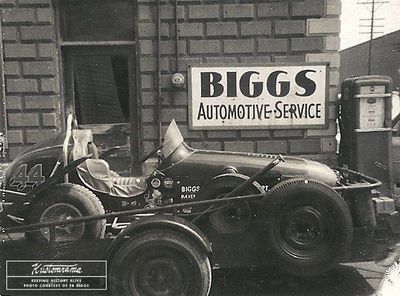 One of the Biggs’ midget racers in front of Biggs Automotive Service. Photo courtesy of Ed Biggs. 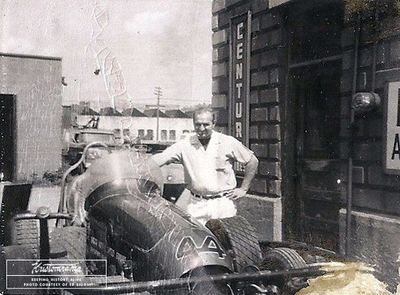 Ed’s dad opened up Biggs Automotive Service in 1946. Ed was 4 years old at the time, but already a “partner” in the shop. Photo courtesy of Ed Biggs. 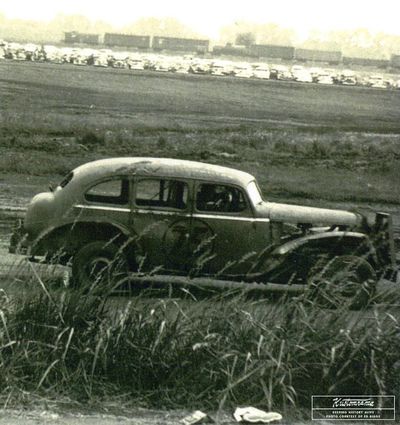 The breadwinner for Biggs Automotive from 1948 to 1952, a Hudson with a race engine and race chassis parts. Ed and his dad used to run several days a week at tracks within about 100 miles of Davenport. Photo courtesy of Ed Biggs. 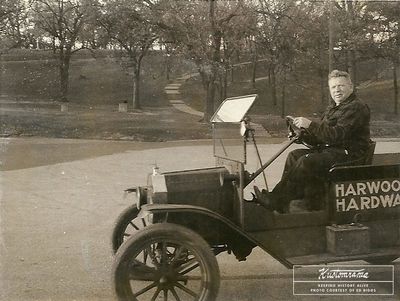 Ed bought his first car, a 1911 Ford pickup, New Years day in 1949. He was 8 years old at the time, and it was the car he learned to drive on. This photo shows Ed’s father as he is trying the old jalopy. Photo courtesy of Ed Biggs. 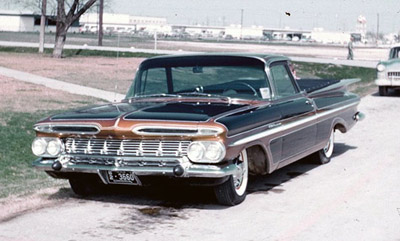 Ed Biggs' 1959 Chevrolet El Camino. In the Summer of 1959, Ed decided to turn a brand new El Camino into a shop truck and rolling advertisement for Biggs Automotive Service. Two years earlier he had met Joe Andersen in California, so when he ordered the El Camino he had it delivered to a Gardena, California dealer, so Joe could pick it up and give it one of his popular custom paint jobs. Photo courtesy of Ed Biggs. 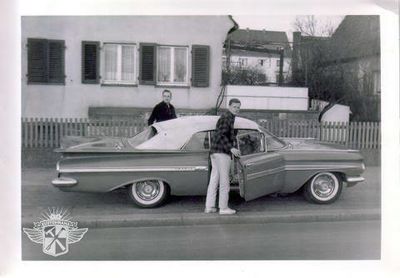 After Ed's El Camino was totaled in Germany, he replaced it with a 1959 Chevrolet Impala convertible. In this photo, Ed is the one on the left side of the car wearing a black sweater. Photo courtesy of Ed Biggs. 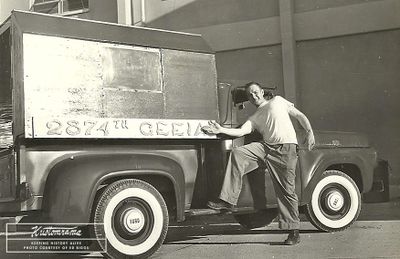 A mildly customized 1959 Ford F100 truck that Ed and his service buds used while they were in Turkey early in 1961. The truck was used for R&R, rest, and recreation, and it was painted Air Force blue with orange letters. Photo courtesy of Ed Biggs. 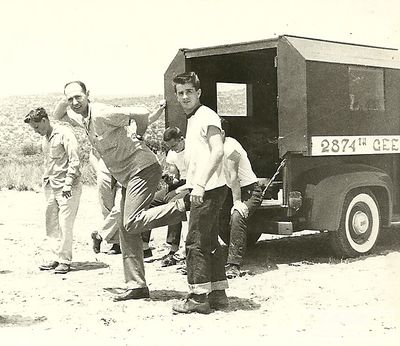 Ed had to take the whitewall tires off the truck, as only staff cars for generals could have them by regulations. Photo courtesy of Ed Biggs. 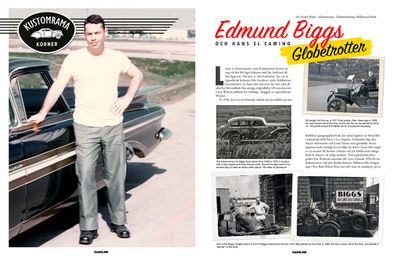 A story about Ed and his El Camino by Sondre Kvipt was published in the Kustomrama Korner in Gasoline Magazine 8/2014.

Ed was born in 1941, and at age 4 he started to work with his dad in a garage belonging to a master mechanic named Ed Schmidt. Schmidt was an aircraft mechanic, and he became Ed's master in 1945. In 1946, young Ed and his dad opened up their own shop "Biggs Automotive Service". The duo raced a local stock car circuit several times a week, and after a trip to California in the summer of 1947 Edmund was hooked on midget race cars and hot rods.[1]

Ed began doing race type engines in the shop. By 1948 he started to sell engine parts, Hot Rod Magazines, and speed equipment. Around 1949 Ed began a scrap yard as well, buying all the junkers he could, selling a lot of used parts, engines, and so on. The scrapyard did also provide the shop with a lot of rebuildable parts.[1]

Around 1949 Ed started working on his first hot rod, a 1947 Mercury club coupe. He began to deal in early hot rods and pickups buying up all he could. During that time Ed installed a lot of Cadillac, Buick, and Chrysler Hemi engines in all kinds of cars. Many for customers and some for his own pleasure. Many cars were sold after the engine had been swapped, as Ed would sell the car at any time someone would let him make a buck.[1]

In 1951 Ed decides to build a GMC 6 for racing. He considered an Oldsmobile Rocket but thought they were heavyweights and wanted something different. He built the engine following the guidelines of Frank McGurk. A 270 ci engine was taken to 302 ci. He installed 13 to 1 full race pistons and a wild Isky E4 camshaft. The engine was put in a stock car, and Ed won the 1951 and 1952 track championships with Kenny Spaeth at the wheel. In 1953 Ed and his dad stopped racing stocks at the shop. By then they were doing lots of race parts and were a supplier and dealer for several west coast companies. Ed took the GMC 6 and installed it in a 1938 Chevrolet two-door sedan.[1]

Ed finished his apprenticeship with Ed Schmidt in September of 1953. About the same time, he finished a fully customized 1950 Ford Convertible and a chopped and Z'ed 1942 Ford Business Coupe. Both these cars were sold when they were finished. Ed did also build several 1932 - 1934 Ford Coupes. He actually built so many of these that they became his trademark type of rod. At age 14 Ed got a learner's driving permit. He did drive somewhat regularly before this but for special reasons and restricted places. He had a horse to care for and could drive under Iowa law at any age for farm animal care. In 1956 Ed became a member of the Rock Island Piston Pushers. The following year, he updated the GMC 6 engine in his 1938 Chevrolet to a new 302 block that he took to 330 ci. Ed wanted to put a 12 port head on the engine as well, but he was never able to find one he could afford. With its 350 hp, the car was according to Biggs a street sleeper and a terror, and it would lunch a transmission if it was launched off the line.[1]

At age 16, in 1957, Ed had already built a number of hot rods, racers, and custom cars, and he decided to take another trip to California that summer, to visit a girlfriend. After school let out for the summer, he worked a week before he loaded his tools in his 1951 Chevrolet and headed West. Broke and without a driver's permit, Ed worked his way to the coast and back again. During his stay, he worked for Frank McGurk, whom he knew by phone contact and after he had built the engine in his Chevrolet following McGurk’s guidelines. The weekend before school started the same summer, Ed left California filled with impressions.[1]

In 1958 a large number of the members in the Rock Island Piston Pushers left the club to get on with their lives. Some graduated from school, some took jobs in another area, some got married, and more. Not being able to find new members willing to be involved with the club, there were not enough members left to pay the rent on the club building they had. To solve the problem, Ed rented a building in Davenport, and started a new club with some friends. After hosting a few beach parties with cookouts and popular music to dance to it didn't take a long time before Ed and his friends had potential prospects fighting to get into the Idlers. By doing this, the new club attracted a lot of different guys, and not all members were as dedicated hot rodders as the guys in the Rock Island Piston Pushers. But the club had a club drag and a stock car. The club lasted a few years, and was gone by 1963 for the same reason as the Pusher.[1]

While Ed was living and working in California, he met Louis Senter. Senter was the mentor for Joe Andersen, an aspiring young custom painter, and through Louis Ed met Andersen as well. In the Summer of 1959, Ed decided to turn a brand new El Camino into a shop truck and rolling advertisement for Biggs Automotive Service. When he ordered the El Camino, Ed had it delivered to a Gardena, California dealer, so Joe could pick it up and give it one of his popular custom paint jobs.[1]

In September of 1959, Ed joined the US Air Force. In July 1960 he was stationed at the Ramstein Air Base near the town of Ramstein in Germany. Shortly after arriving in Germany, Ed shipped the El Camino over as well. For the next 3 years, he traveled a lot using the car as transportation when he could. Early in 1962 tragedy struck, as the El Camino was totaled when hit by a drunk Italian in a Fiat. The car was parked on a oneway street in Weisbaden when the Fiat hit a car on the left side of the street. He then got turned and hit Ed's car head-on in the left doorpost dash area. As Ed was not able to have the car fixed up in Europe, he sold the remains to a friend that was returning to the US. Ed was stationed in Germany until 1963.[1]

Bck in the USA

After Ed got out of the service, he built his last trademark 1932 Ford 5-Window Coupe. In 1969 Ed sold the coupe so he could buy a house in Davenport. He ran the garage until 1970 when a disagreement with his father ended the situation. He did continue some open-wheel racing until 1990, but just for fun.[1]

Please get in touch with us at mail@kustomrama.com if you have additional information or photos to share about Ed Biggs.