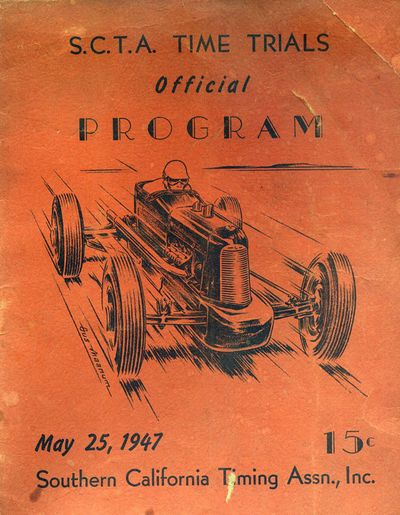 The official program for the event showed a drawing of Danny Sakai's Modified by Gus Maanum.

The opening event for the 1947 season time trials sponsored by the Southern California Timing Association was held May 25, 1947 at El Mirage dry lake.

For the 1947 season, the S.C.T.A. ran under a new system of Competition Classes. American Production Automotive Engines were still required as a basis for the engine construction, but the competition was divided into two body types with four class in each. The cars were classified either as Roadsters or Streamliners. The classes were then divided according to total Engine Cubic Inch Displacement:

Please get in touch with us at mail@kustomrama.com if you have additional information or photos to share about El Mirage May 25, 1947.