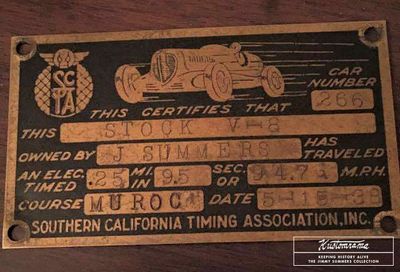 One of Jimmy Summer's Muroc timing tags from 1938. Running a stock V-8, he achieved a speed of 94.73 MPH at the May 15, 1938, Muroc Roadster Races. Photo from The Jimmy Summers Photo Collection.

Organized in Los Angeles in 1937, the S.C.T.A was the first organization of its kind in the United States to be devoted entirely to producing straightaway racing against time. Art Tilton was the first secretary for the SCTA.[1]

For the 1947 season, the S.C.T.A. ran under a new system of Competition Classes. American Production Automotive Engines were still required as a basis for the engine construction, but the competition was divided into two body types with four class in each. The cars were classified either as Roadsters or Streamliners, and the classes were then divided according to total Engine Cubic Inch Displacement. "Class A" was for cars with 0 - 150 cubic inches engine displacement, "Class B" for cars with 150 - 250 cubic inches, "Class C" for cars with 250 to 350 cubic inches and "Class D" was for cars with 350 and over cubic inch engines. To establish new records in each of the eight classes, the two high point cars in each class were allowed to make two-way record runs after the third runs were finished. The final record in each class was accepted as official. When the first time trials with the new classes were held at El Mirage May 25, 1947, Randy Shinn had the previous top record for the old roadster class with a record of 128.66 MPH, set in 1946. Karl Orr had the Modified record with 133.03 MPH, set in 1942. Bob Rufi had the Streamliner record with 140.00 MPH, set in 1940, and Tony Capanna had the Unlimited record with 138.24 MPH set in 1946.[2]

For 1949, rods based on Model T's were redesignated as Lakesters by the SCTA, not roadsters, because they were considered smaller and more aerodynamic by the owners of bigger and bulkier model A's and '32s.[3]

Akton Miller acted as President of the organization for the 1950 season.[4]

The 1951 SCTA season was opened at El Mirage in May. This was the first year that SCTA allowed coupes to compete at their speed trials.[5] Bill Burke was President of the organization for the 1951 season.[4]

SCTA is an all volunteer organization whose mission is to provide Land Speed Racing (LSR) events in Southern California at El Mirage Dry Lake and at the Bonneville Salt Flats in Utah. Usually six events are scheduled each year at El Mirage Dry Lake spanning the period of May to November and there are two SCTA-BNI-sanctioned events on the Bonneville Salt Flats: Speed Week (August) and World Finals (October.) All events are subject to cancellation due to weather. Muroc Dry Lake (also known as Rodgers Dry Lake) is located within the boundaries of Edwards Air Force Base. It was a part of the LSR venues until heightened security restrictions following the 9/11 terrorist incident made it unavailable to civilians which ended a long string of meets at that location.

SCTA Officers and Officials For 1947

Please get in touch with us at mail@kustomrama.com if you have additional information or photos to share about Southern California Timing Association.