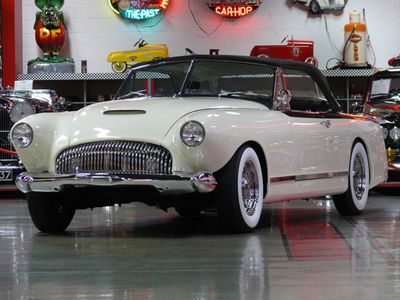 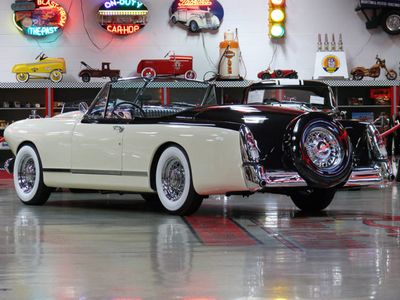 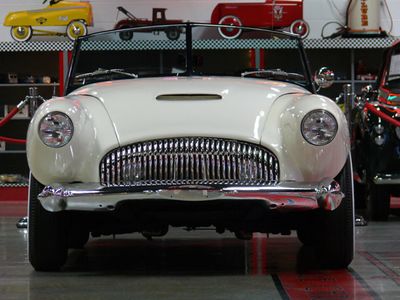 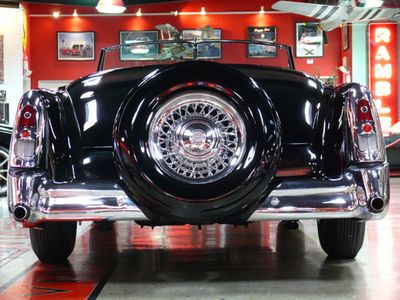 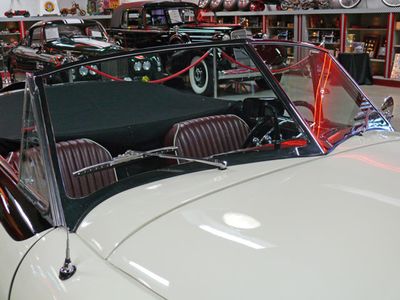 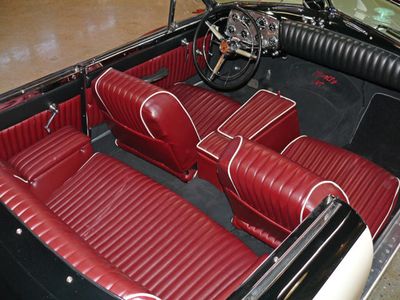 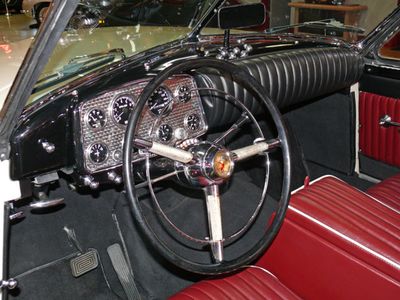 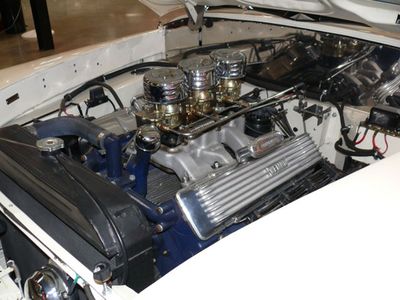 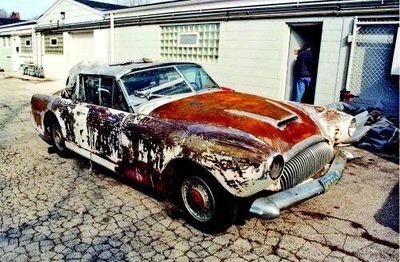 The car as it sat when it was found in Oregon in the late 1990s.

1952 Muntz Road Jet restyled by Joe Bailon of Bailon's Custom Shop for Freddy Martin. Freddy was a well known band leader and bought his Muntz brand new in 1952. He bought the car from Earl Muntz for $5500. Freddy drove around with it for a while until he decided to have it restyled by Bailon's Custom Shop. Bailon restyled Martin’s Muntz Jet by the adding a custom made grille, airscoop and continental kit. The front end was totally re-worked as Martin felt that the car looked ‘snub-nosed’. Bailon cut away the original sheet metal in order to fit the custom grille. The hood was opened with a scoop at its front. The fenders were extended forward, and featured frenched headlights. At the rear, the fenders were extended and fit with Mercury style tail lights. The fenders were joined by a Mercury-type bumper. The car was powered by a hopped up 275hp V8 Cadillac engine. Bailon painted the car white, and had a black top added. The car was trimmed from end to end with chrome, before wire wheels were added.[1]

The finished car caught the eyes of two writers for Motor Life while they were on their way to another job bustling through the busy Hollywood traffic one morning. Giving chase they flagged the car down and were able to write a completely different story entitled ‘A Correspondence Custom’, referring to the fact that Martin’s busy schedule had only allowed for him to write and call Bailon during the revision - in fact they were able to photograph it before Martin had even seen the car himself![1]

Bailon is said to recall that Martin liked the car, but used it very little. Its life after Martin isn’t known exactly until it surfaced in pretty much derelict condition in Oregon in the late 1990's. Frank Opalka and Lou Natenshon of Highland Park, Illinois acquired the car and oversaw a thoroughly authentic restoration of the car with an onus on replicating rather than improving Bailon’s work. The grille evidence of the metal snips he used are still present for example. The Cadillac motor was completely rebuilt and detailed as was the suspension, the underside of the car soundly weatherproofed and chrome were appropriate restored or replaced.[1]

The interior, which seems to have been predominantly stock Muntz was similarly restored. A full article charting the restoration by David LaChance appeared in Hemmings Classic Car Magazine December 2006, during which La Chance made contact with Bailon who vividly recalled rebuilding the car for Martin. It was debuted at the Amelia Island Concours d’Elegance in 2006. In 2008 the car was shown and toured at the Pebble Beach Concours d’Elegance.[1]

December 2009 the car was listed for sale on eBay, with only a few hundred miles on the odometer.

Please get in touch with us at mail@kustomrama.com if you have additional information or photos to share about Freddy Martin's 1952 Muntz.