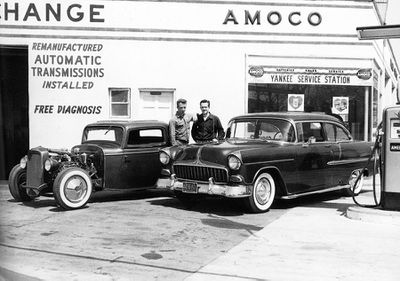 An early version Jack's coupe next to Andy Southard's 1955 Chevrolet. This photo is taken at the Yankee Service Station. Jack had a garage at the property, and Andy Southard pinstriped out of the back of the service station. This version of Jack's coupe featured a flathead engine, a 1939 Lincoln Zephyr transmission, 1953 Studebaker hubcaps, and pinstriping by Andy. Photo by Andy Southard, from the book Custom Cars of the 1950s. 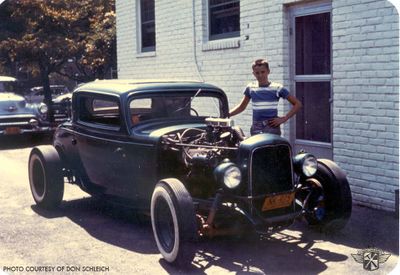 Jack's coupe as it appeared in 1958. This version featured a 1949 Oldsmobile engine with three-2 barrel carbs and a Cadillac LaSalle 3-speed on the floor. Jack's brother Don Schleich is standing next to the coupe in this photo. Photo courtesy of Don Schleich. 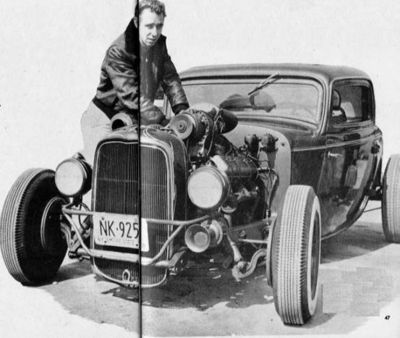 Jack's coupe as it appeared when it was featured in Custom Rodder March 1959. By then the car was powered by a McCulloch supercharged 1949 Oldsmobile engine. 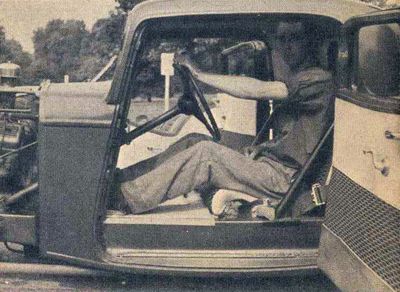 This photo of Jack in the coupe, was published in Custom Rodder June 1961, in a story about the Avenue Angels of East Rockway. Photo courtesy of Custom Rodder. 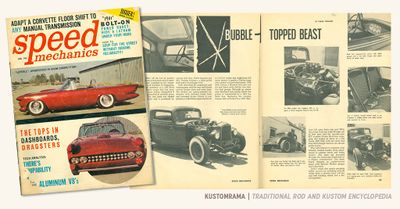 Don's coupe was featured in Speed Mechanics August 1961. The story was written by Frank Triplach. Photo courtesy of Kustomrama. 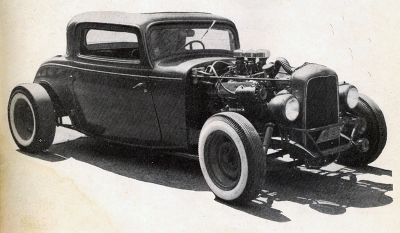 Jack's coupe as it appeared when it was featured in Speed Mechanics August 1961. This version featured an 1954 Oldsmobile engine that was fed trough three carburetors. 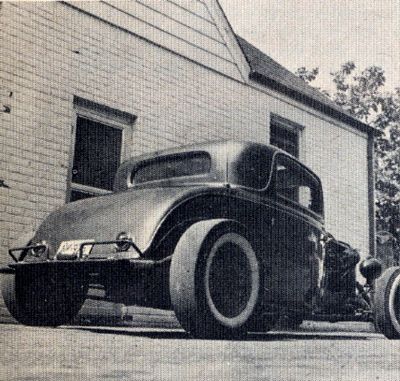 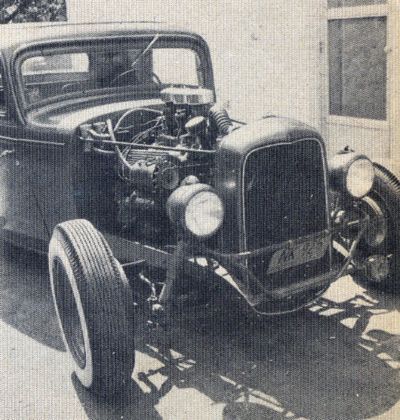 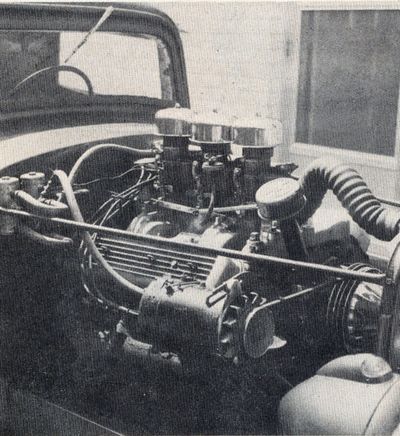 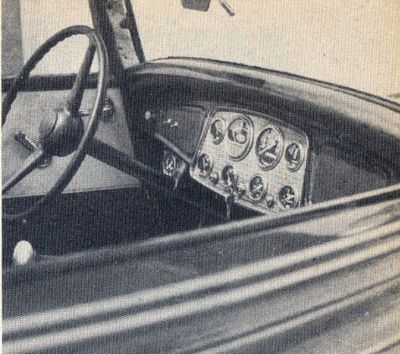 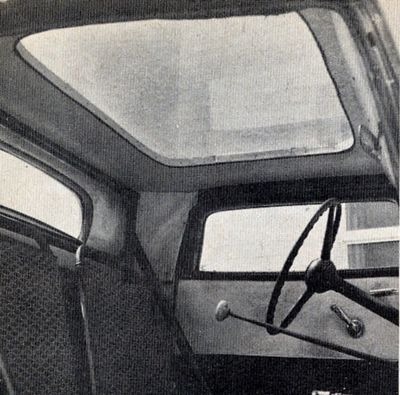 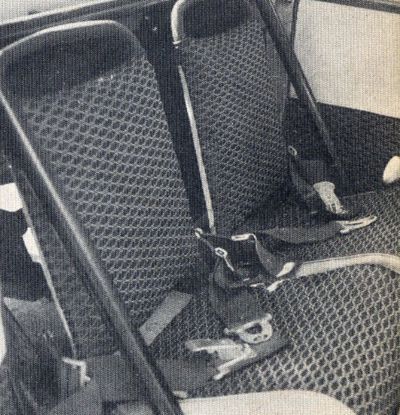 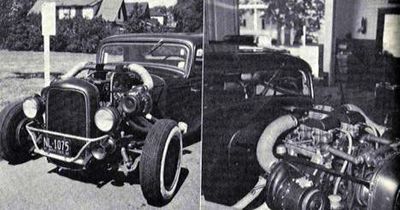 By 1961 Jack had progressed to a dual McCulloch setup on his coupe. He then ran a six-carb setup on a 1960 Oldsmobile mill. 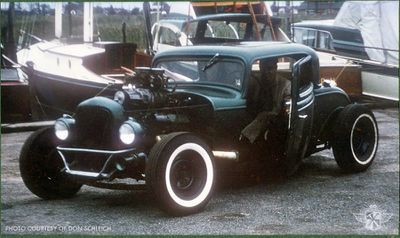 Jack's coupe as it appeared after Jack's brother Don had installed a GMC 4-71 blower with 2 AFB carbs. Photo courtesy of Don Schleich.

1932 Ford 3-Window Coupe owned and built by Avenue Angels member and president Jack Schleich of Oceanside, New York. Jack bought the coupe in 1957. When he bought it, Neal McCarn of Neal McCarn's Auto Body in Lynbrook, New York, had already chopped and channeled it. Neal had taken 3 inches out off the roof, and he had dropped the body 8 inches over the frame. He had also made a new firewall that he had molded the frame-rails into . Jack's little brother Don believes Pat Eovino of Pat's Auto Body in Oceanside, New York welded and leaded the rear deck in on the coupe for Jack. 1951 Pontiac taillights and a custom nerf bar were installed in the rear of the coupe. The grille shell was filled, and the chopped top featured a tinted glass inset. Don remembers that he and Jack dug a pit in the floor of an old garage where they did a lot of the work on the car. The garage was on the property of the Yankee Service Station, which was in front of Evoino's Auto Body. Don was a helper, and he did the aluminum work in the rear compartment behind the seats of the coupe along with some other things as well. After the bodywork was done, the car was painted green metallic by Wreck-Nu Collision in Rockville Center, New York. Jack ran the coupe without hood and fenders. The suspension was reworked, and the rear end boasted custom torque arms and sway bars. The brakes were power-assisted hydraulics with shielded brake lines and reversed drums.[1] The brake drums were from a 1948 Lincoln. When the build was completed in 1957, Jack ran the coupe with a flathead V-8 that was connected to a 1939 Lincoln Zephyr transmission. This version did also feature 1953 Studebaker hubcaps and pinstriping by Andy Southard, who pinstriped out of Yankee Service Station at the time. A couple of years later Jack installed a 1949 Oldsmobile engine with three-2 barrel carbs and a Cadillac LaSalle 3-speed on the floor. The LaSalle transmission was later changed to a side shift with a homemade floor shifter and linkage, and a homemade nerf-bar was installed up front.[2]

In 1959 a photo of Jack's coupe was printed in Custom Rodder March 1959, by then Jack had installed a McCulloch supercharger on the Oldsmobile engine. He ran a single four barrel carburetor and four fuel pumps with the supercharger.[3] In 1961 Jack's coupe was featured in Speed Mechanics August 1961. That version featured a 1954 Oldsmobile engine that had been bored out to 3-15/16 inches, displacing 330 cubic inches. It ran a Vertex magneto, ported and polished heads, 1958 Oldsmobile valves, a Howard full cam and kit, and three carbs that were fed by two electric fuel pumps. Power was transmitted through an aluminum flywheel, racing clutch and a 1937 LaSalle transmission. A 1951 Mercury 3.31 open drive rear end replaced the original torque tube driveline. At the time Jack worked for Bill Frick at Bill Frick Motors, and the rear suspension in Jack's '32 was built at Frick's with the help of Teddy Schill, another employee. The new rear suspension was a non-adjustable 4-link arrangement, a Bill Frick favorite even in the early era. The rear 4-link tubes on Jack's coupe were made from Buick suspension pieces that had eyelets with rubber bushings in the ends similar to a shock absorber mount. With this setup, Jack could wind 90 mph out of first gear and his quarter mile E.T was under 13 in 1961. According to the featured story, Jack had a full house 1960 Oldsmobile 394 cubic inch engine with six carbs and dual McCulloch blowers for the car. The new engine was installed later on the same year. The VS57 units fed three carbs each via custom carb bonnets, allowing them to be run at a higher pressure without being too heavily loaded with air flow demands.[4] The cam was a Crane cam. The interior featured tubular, framed bucket seats upholstered in quilted fabric and white leather. The seats were mounted through the aluminum floorboard to a chassis crossmember. The dashboard featured an engine-turned panel with Stewart Warner gauges and a Sun tach. Safety accessories included aircraft safety belts, a chrome moly roll bar and bell housing shield and a fire extinguisher.[1] The LaSalle manual 3-speed transmission was swapped out in 1961 or 1962 for an Oldsmobile Hydramatic transmission that was modified to shift manually.[2]

Jack ran the dual McCulloch superchargers for quite some time. As his brother Don became old enough to drive, Jack let Don use the coupe. Don swapped the two McCulloch superchargers for a GMC 4-71 blower with 2 AFB carbs. After breaking six of the eight cast pistons on his first test run, Don had to rebuild the engine. During the rebuild, Don installed lower compression forged pistons. Don remembers that the fastest set of wheels on the street at the time was the Chevrolet Biscaynes with the 409-425 HP engine. They were heavy though, and Don had no trouble taking them out. Don drove and street raced the coupe until he went into the service in November of 1963. He used it when he was on liberty, and Jack drove it to work into 1966. After that, the car sat covered up with a tarp at Jack's new boatyard while he was in the process of starting his own business. Don worked with Jack part time in the boatyard business while he was in the service. When he got out in 1967, he started full time. They were both working seven days a week to get the business going, and paid no attention to the coupe. Finally, in need of some extra cash, the coupe was sold to a local guy for $1,800 in 1967. After the car had been sitting for all that time, Jack and Don uncovered it, charged the battery and started it right up. Don never saw the car again, or heard from the buyer. The coupe was the only car Jack ever built, while Don continued building hot rods and street rods.[2]

Please get in touch with us at mail@kustomrama.com if you have additional information or photos to share about Jack Schleich's 1932 Ford.